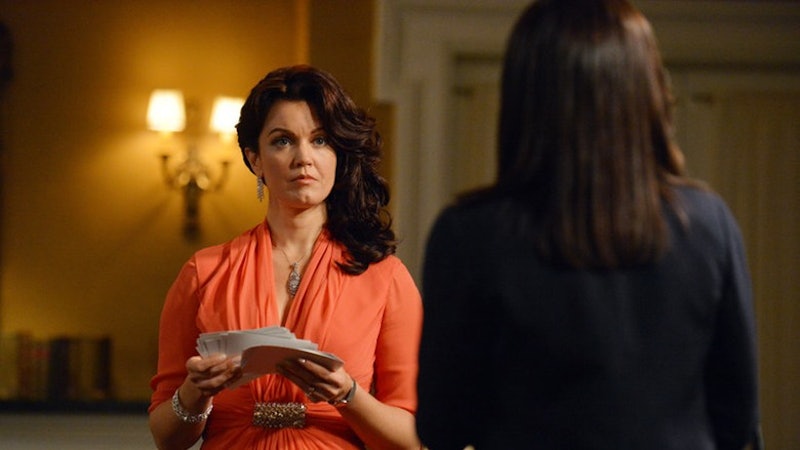 There have been a lot of head turning moments on tonight's Scandal,but as jaw dropping and edge of your seat as the whole episode was, perhaps one of the most interesting moments was when Mellie finally, at long last put words to her political ambitions. And the words are: Mellie wants to be president. and I for one, am all for it.

It's been said any number of times throughout the how that Mellie Grant "could have a political career of her own" — in fact, Fitz has even used the possibility of Mellie's future career to encourage her to stay quiet about his many "indiscretions" or as I like to call them "massive betrayals." I mean, I'm all for Olivia getting to be with him if that's what she wants, but let's not pretend he isn't a cheating bastard. Plus, he's not very good at being president, or living up to the potential that all these people supposedly saw in him when they moved heaven and Earth to put him in the Oval office.

But Mellie Grant on the other hand? Mellie would be awesome.

Let's recap: Mellie Grant is brilliant. She's not only a brilliant political strategist, but the few times she's been given a chance to talk policy, she's shown herself to be well-informed and insightful — even if "talking policy" means debating gun control with Andrew while drunk.

Plus, despite dealing with any number of awful problems throughout the series, the only time she's ever lost her poise was when her son died. And even then, she managed to get it together again once she learned the truth about his death. Fitz, on the other hand, just about has a breakdown every time he loses Olivia — even if it's his own fault.

Plus, Mellie has never killed anyone. So she has that advantage over all the rest of last election's candidates.

But even apart from that, Mellie has always been a more interesting, tougher, more intelligent player than Fitz. And if she ever does get the Oval Office that she so richly deserves, you can bet that the second Grant Administration will vastly outshine the first.