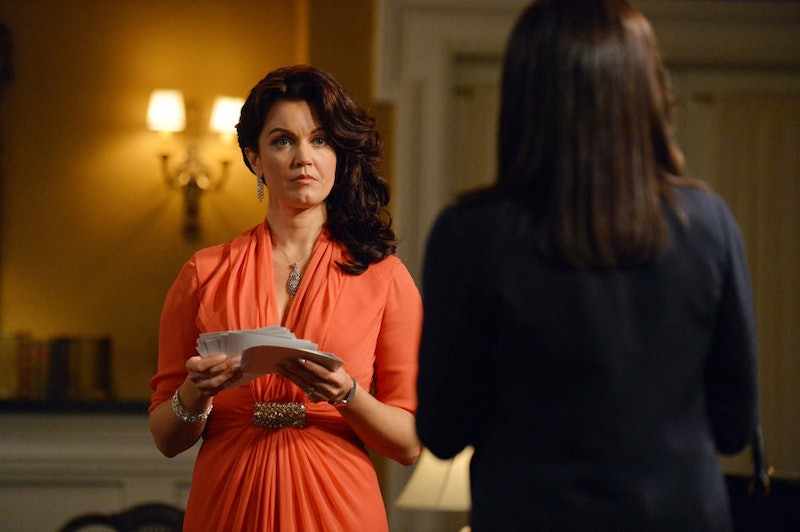 Going into its fourth season, it might be easier to list things that haven't yet happened on Scandal: bear attack, dance off, Disney World-themed episode. It's astounding how much action,drama,tension, and grief can be packed into one 42-minute episode each week. It's the only show on television that routinely makes me audibly gasp out loud because that. just. happened. Another bomb that might. just. happen. (if my spidey senses are correct) is the much needed divorce of Fitz and Mellie Grant on Scandal.

But I'm not just making this up completely. Sonya Wagler was cast for Scandal Season 4, and my Scandal sense tells me she's not going to be a part of Olivia Pope and Associates. This casting comes on the heels of word that Portia de Rossi will play a "top secret" role, according to TVLine. Let me just say it now: I think one of these women is going to play a divorce attorney for First Lady Mellie Grant.

But I thought they couldn't get divorced because it would bring down an entire nation?

The topic of a Fitz-Mellie divorce has been discussed between them before, and it was always at Fitz's suggestion. Our fictional president desperately wants to run away to Vermont with Olivia. Every time he's suggested it, he's then either recanted his suggestion — usually because Olivia talks some sense into — or because he remembers that he's the President, and the President can't just do that. He's always gone back to Mellie, and they've tried to work through their issues as best they can (which usually works for like a day and then they're at each others throats again).

Now, I have a sinking feeling that Mellie is going to suggest a divorce. It's time for Mellie to want out for good. It would be an unprecedented first couple move, one that has never been done before in real life or in film and television, but an alien invasions has never happened before, either, and that hasn't stopped Michael Bay from destroying the White House anyway. Considering that Scandal loves to do things you'd never even think possible (Rigged elections! Suffocating a Supreme Court Justice! Throwing Scott Foley into a hole!), what happens if Queen Shonda of Thursday Nights decides to go a completely normal human route: what happens if a husband and wife, who just happen to be President and First Lady, decide to call it quits?

If I had a big window, I'd start putting up pictures of everyone associated with the issue, but I don't, so just visualize it in your head. First and foremost, the two of them are suddenly dealing with a very real issue: the death of a child. Let's also consider the fact that Mellie literally just learned that Jerry Jr. is in fact Fitz's, and not Big Jerry's like she's suspected for years. She gets a real paternity test, and learns that the son she's silently resented has always been a true part of the family, and not because her drunken father-in-law forced himself upon her. What a relief. For about thirty seconds.

So here we have Mellie, thanking her lucky stars and saying her blessings, when suddenly her son is ripped away from her in a very public place. The whole nation witnesses it, and then for the real kicker, her husband is re-elected.

On the other hand we have Fitz, who when not standing in front of his giant Oval Office windows, gazing over his country like Simba at the top of Pride Rock, he's busy thinking up ways to sneak out of the White House like a kid grounded for eating too many chocolate bars before dinner. All Fitz wants to do is run away with Olivia, and he plays this awful yes/no game with himself, where one moment he's totally confident that he can do it, and the next he's like, "nah, I'm still the President!" Fitz has just watched his son die and regardless of his wandering ways, this is going to shake him to the core. When the season picks up, these two will most definitely still be dealing with the aftermath. Maybe it'll get better for a little bit, but if we know anything about Scandal, it will then get far far worse.

Fitz is a good guy (except for the whole years of infidelity thing), so he will be there for Mellie. But, I think Mellie is going to push him away. Not right away at first, but slowly, over the course of the next season, their marriage is going to finally crumble. You can only put the pieces back together so many times until they break, too. Mellie's going to be the one to ask for the divorce, and she won't consider it a flaw in her character.

In case you guys don't already know, Mellie is kind of a bad ass, and not someone I'd ever want to mess with. For the first time in a very long time she might actually something for her. She could take control of what she wants, and she wants a fresh start, away from the hoopla of the White House.

And What if Mellie Does Ask for a Divorce?

Let's be honest: Fitz won't fight this. He's been asking for it for years. For a split second he'll probably wonder how it'll affect his presidency, but then he'll remember he's already been re-elected for a second term, and since he can't go for the hat-trick, he'll be like, "Oh, cool, Mellie. Send the kids to Vermont for Christmas!" Secretly, it's what he wants, too. It's what he's always wanted.

It's not a stretch to think it might happen. Sally Langston stabbing her husband to death with a letter opener? No, I wouldn't have considered that a possibility at the start of Season 3. Divorce for the Grants? That seems like a real world scenario in an otherwise insane show. Olivia might be the scandal, but honestly, guys, it's time for things to really start coming up Mellie.