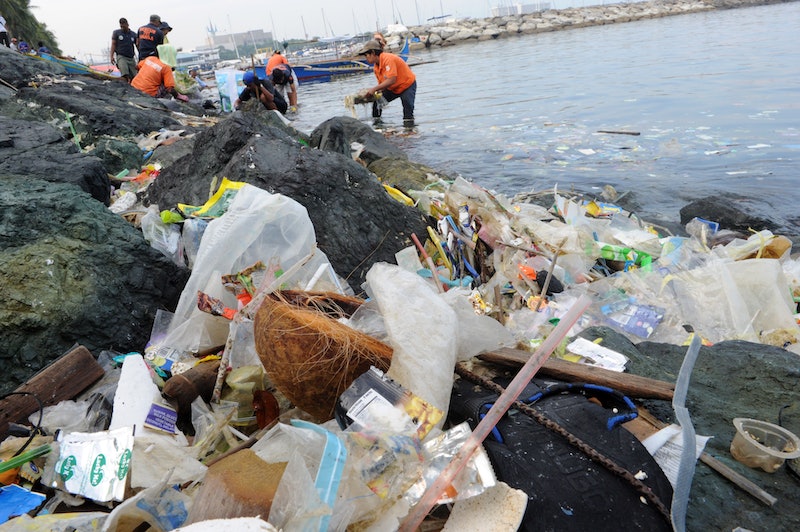 Turns out humans are a lot messier than we thought. In a new study released Thursday, the University of Georgia's Jenna Jambeck, an assistant professor in the College of Engineering, along with seven of her colleagues, calculated that in 2010, approximately 275 metric tons of plastic waste was generated by 192 separate coastal nations. About 4.8 to 12.7 million tons of that waste actually wound up in the ocean, they claimed. On average, Jambeck and her associates estimated that an average of 8 million metric tons went into the world's oceans every year — a substantially larger sum that what researchers had originally estimated in December of last year.

Researchers first reported plastic trash floating around the ocean way back in the '70s, wrote research co-author Kara Lavender Law in a 2013 report for the National Center for Ecological Analysis and Synthesis (NCEAS). "Rigorous scientific evaluation of the problem has lagged behind the increasing attention from a diverse set of stakeholders," she explained. "Only recently has 'marine debris' begun to emerge as a recognized field of scientific inquiry, with novel research efforts underway in tandem with new interest by major funding agencies and foundations." Outdated numbers simply don't do scientists any good, she insisted.

Tech blog Gizmodo reports that the researchers used an intricate calculation method to get to those numbers. Using accumulated World Bank Data, they explain, the researchers constructed a statistical model that would reflect how efficiently each of the 192 coastal nations managed their plastic waste, based on country size, region, and economic status. According to their findings, rapidly developing countries such as China (which came in at number one), Egypt, and India were among the top 15 worst offenders. Surprisingly, the United States trailed behind at number 20 — which still isn't exactly a good thing.

Jambeck is quick to point out that that the 8 million tons of trash weren't necessarily dumped there on purpose. In an interview with NPR, she explained, "If you have waste that's free in the environment, on the land mass that's in close proximity to the ocean, it's going to be blown or be washed into the ocean. It also could be washed into rivers and then flow from there." In other words, trash doesn't just have to be hauled overboard at sea to cause problems — the daunting statistics could simply be the result of citizens in coastal nations ignoring their own litter.

A 2013 report by the EPA encouraged citizens to assist in regional clean-up efforts and to address litter problems in their neighborhoods. Mismanaged trash in local waterways directly impacted nearby regions, they explained:

Some of the most common items they found were food wrappers, straws, and plastic bags, reported the EPA. And although environmental researchers have reported that 99 percent of the estimated ocean debris has "gone missing", questioning why some of the plastic garbage "patches" they were discovering during clean-up efforts weren't bigger, study co-author Roland Geyer warns that the plastic didn't just disappear — it had to be out there somewhere.

"An important question is 'where is it all?'" said Geyer in a comment to CBC News, "and then of course, 'what does it do to the natural environment and in the long run what does it do to us?" One guess is that over time the missing trash may have fragmented into smaller particles, referred to as microplastics, and might be slowly descending to the ocean floors or being eaten up by fish and plankton. Worse, says one group of researchers out of Dartmouth College and the University of Plymouth, some of that plastic might be accumulating within polar ice melts at the poles.

Jambeck and her colleagues warned that the consequences of doing nothing could be catastrophic. The researchers suggest that at the current rate, the amount of plastic entering the oceans could rise to 155 million tons annually by the year 2025. During a conference on Thursday at the American Association for the Advancement of Science in San Jose, Calif., Jambeck told reporters,

It's not about finger-pointing, but examining things that strongly influence a country's rank on this list. ... We know the solution. We must cut back on plastic waste generation, and increase the amount we capture and manage properly.