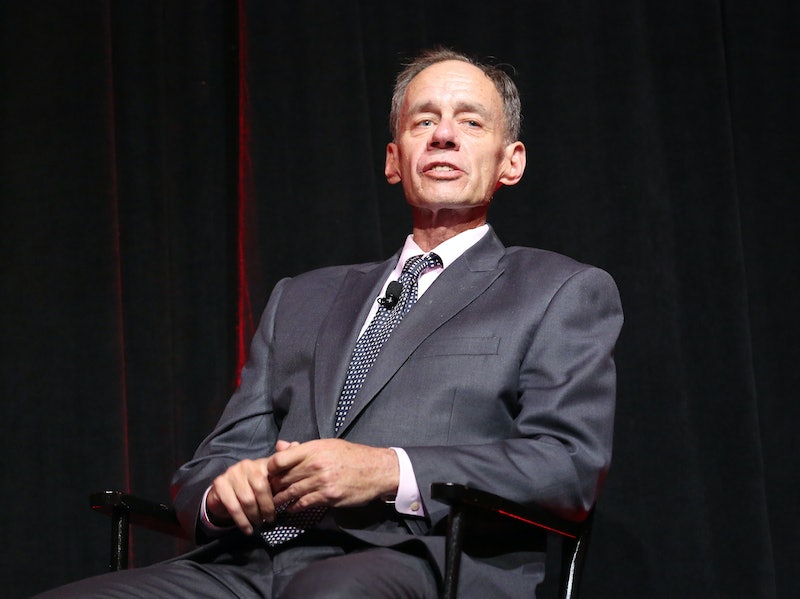 As the media columnist for The New York Times, David Carr covered what he knew best: his own field. Carr, who died after collapsing in the newsroom Thursday night, was one of the most celebrated media writers in the industry. Although he was known for his creative prose, Carr became even more famous in media circles when he was heavily featured in the documentary Page One, which focused on the NYT newsroom. It was during his time at our national newspaper of record that Carr wrote some of his most memorable pieces.

Media is one of those beats where there's always something to cover. In just the past month or so alone, in his column, "The Media Equation," Carr wrote about topics including: Jon Stewart's retirement, the nature of Brian Williams' memories, how media titans dabble in both politics and news, the Oscars omitting Selma, Microsoft's new HoloLens technology, and buying issues of Charlie Hebdo in support of free speech. It was an overwhelming task, to keep track of all of these stories, but Carr had done so for the past 13 years. His best work not only kept us informed, but it serves as an inspiration to all writers. Here's a few of his pieces that should be required reading.

"Me and My Girls"

The July 2008 piece was a personal essay of Carr's, which he eventually turned into a memoir. The story details his experience with his twin daughters, who were born while he was unemployed and in the midst of a cocaine addiction. Carr got full custody of his children, cared for them, and, as we all know, became a prominent journalist at The New York Times.

"Me and My Girls" — The New York Times

"Why Not Occupy Newsrooms?"

In a 2011 interview with NPR, Carr called "Why Not Occupy Newsrooms?" a mean piece he had written without reaching out to any of those involved to comment. The article touched on the Occupy Wall Street movement and asked why no one was occupying newspapers and other media organizations when their executives were receiving excessive bonuses — like former Gannett CEO who walked away with an approximately $37 million retirement plan.

"Why Not Occupy Newsrooms?" — The New York Times

In one of his more recent pieces, Carr wrote a scathing takedown of Charles C. Johnson, the blogger who threatened the alleged Rolling Stone rape victim on Twitter, named her, and then posted a photo of her (which wasn't actually her). Carr called the blogger out for what he truly is, and gifted his audience with this beautiful quote: "[The Internet] has also offered up some less edifying creations: web-borne viruses, cybercrime and Charles C. Johnson."

"Sowing Mayhem, One Click at a Time" — The New York Times

The Bio He Wrote For His Class Syllabus

Carr taught a class called "Press Play" at Boston University. The Globe and Mail did an interview with him last December, and he passed along the biography he wrote about himself that he included on the class syllabus. It says:

Your professor is a terrible singer and a decent dancer. He is a movie crier but stone-faced in real life. He never laughs even when he is actually amused. He hates suck-ups, people who treat waitresses and cab drivers poorly, and anybody who thinks diversity is just an academic conceit. He is a big sucker for the hard worker and is rarely dazzled by brilliance. He has little patience for people who pretend to ask questions when all they really want to do is make a speech.

"All That You Leave Behind"

Another personal essay by Carr also talked about his recovery from addiction, but this time in a different form. The columnist got into bicycle touring with a group of friends, and the ensuing story was a poignant piece about not only the bike trips he took, but also about the deeper meaning they held.

"All That You Leave Behind" — Bicycling magazine

A 2012 piece on how digital media began to take over even quicker than anticipated showed how Carr acknowledged the emergence as unstoppable, but still stood for the tradition of The New York Times with his feet planted firmly on the floor. His skepticism of the success of The Huffington Post painted Carr as a man who loved print journalism and was distrustful of the new consumer market of online media. But like the No Country For Old Men quote he included, "You can’t stop what’s coming."

The Night of the Gun

Of course, everyone should take the time to read Carr's memoir that investigates his own life, especially the dark parts. He interviewed his own friends, former friends, family members, and co-workers, but also took a look inside himself to provide readers with a picture of what made him the man he was.

The Night of the Gun: A reporter investigates the darkest story of his life. His own.