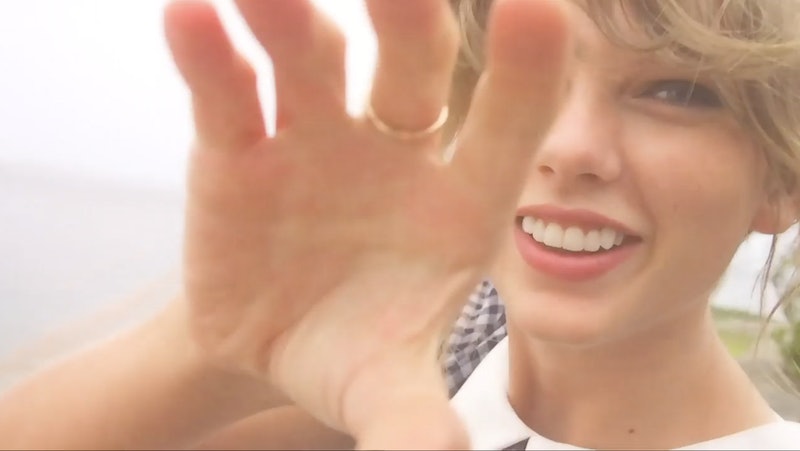 It's here, it's here, it's finally here. No, I'm not talking about Fifty Shades of Grey, although that is certainly here as well. Instead, I am actually referring to the premiere of Taylor Swift's "Style" music video, which debuted on Good Morning America before being disseminated to the Internet for all of us to enjoy repeatedly. The video was the most sultry, sexy, and symbolic one that Swift has ever done, at least as far as I'm concerned, but, as a result of that whole "symbolic" part, there were a lot of moments in the music video that made you stare at the screen in confusion or wonder or... more confusion. I mean, seriously, this video had more WTF moments that "Blank Space" — and Swift stabbed a cake and made it bleed in that one.

Don't get me wrong. The video was amazing, Swift was beautiful, and she once again managed to find very another highly attractive male model to act as her co-star and make us all very jealous of her. She even slipped in a not-so-subtle reference to Harry Styles by holding the airplane necklace the two infamously shared back when Haylor was still a big thing. It was all very masterfully done. I'm just saying that I have a lot of questions about what I just watched. Check out the 13 most WTF moments below.

1. When There Were Eyes On Her Dress

2. When She Lost Her Face

3. When She Wasn't Out Of The Woods Yet

4. When Her Boyfriend Was Watching A Home Movie Of Her On The Curtains

5. When His Face Was On Her Back

6. And Her Eye Was On His Chest

7. When Our Perceptions Of Her Shattered (Get It?)

8. When Her Lips Were On His Lips

9. When She Was Sitting On The Ground Outside

10. When Random Birds Flew By

11. When She Was A Nightmare Dressed Like A Daydream

13. When She Was All Smiling And Happy

It was just a bit emotionally jarring, okay?!

Check out the music video below.