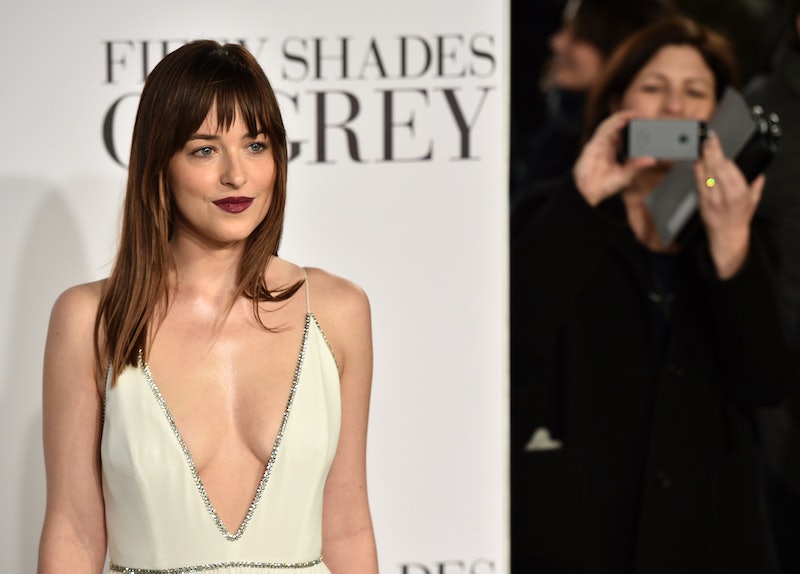 Going into Fifty Shades of Grey, I didn't have very high expectations. I thought it would be ridiculous, funny, but not on purpose, and contain a bunch of sex, because, of course it would. As for the actors, I expected I would enjoy watching Jamie Dornan if only because of my history with him as the hot Swedish soldier from Marie Antoinette , and I expected nothing from Dakota Johnson, if only because I'd never seen her act before. I'd heard that there was a lack of chemistry between the two leads, so, if anything, I thought Johnson might be awkward and uninteresting. Well, I was totally wrong. Almost immediately, it was clear that Dakota Johnson would carry Fifty Shades of Grey , and she ended up being, easily, the best part of the movie. Here are several reasons why.

She's realistic as a college student

Johnson is legitimately funny as Anastasia. In particular, the scene when she drunk dials Christian shows of legitimate comedic talent and is oh so relatable. Speaking of...

Ana says "holy cow"repeatedlyin the book, and while she only had to say it once in the movie, somehow it didn't sound absolutely insane. Possibly because she wasn't made to say it during sex, but still, "holy cow" isn't the most natural phrase. (Bonus points for "enlighten me then" also not seeming weird or forced.)

Any conversation you've heard about there being a lack of chemistry between the two actors, was not Johnson's fault. She had plenty of chemistry with the camera, and it's hard to imagine this wouldn't have translated into chemistry with her costar if he, one, wasn't phoning it in, and two, was given better lines to work with so that maybe he wouldn't have chosen to phone it in. (I know. I know. He has some classics from the book he just had to mutter, but "I don't have sex. I f--k. Hard." doesn't sound natural from anyone.) Johnson seemed relaxed and because of that, made Ana likable, and a foil to Christian's cold, distant character.

She made me want to get bangs

Bangs are not a good idea for me (numerous tests have proven this), yet she made me feel like they are. This might sound silly, but it speaks to how charming Johnson was if you feel like you, too, want to wear a gifted leather jacket, sport bangs, and go for a helicopter ride. There's a part of the movie where Ana and her roommate, Kate, get ready for a night out with friends, and they all meet up at a bar together. Johnson was so endearing, that I want to watch whatever that movie would've become if Christian hadn't shown up to take her home.

After watching Fifty Shades, I left the movie not as interested in what the sequel would bring, but rather in what Dakota Johnson is doing for her next project. She better get a lot of calls, this movie was the best (and longest) audition reel she could have.