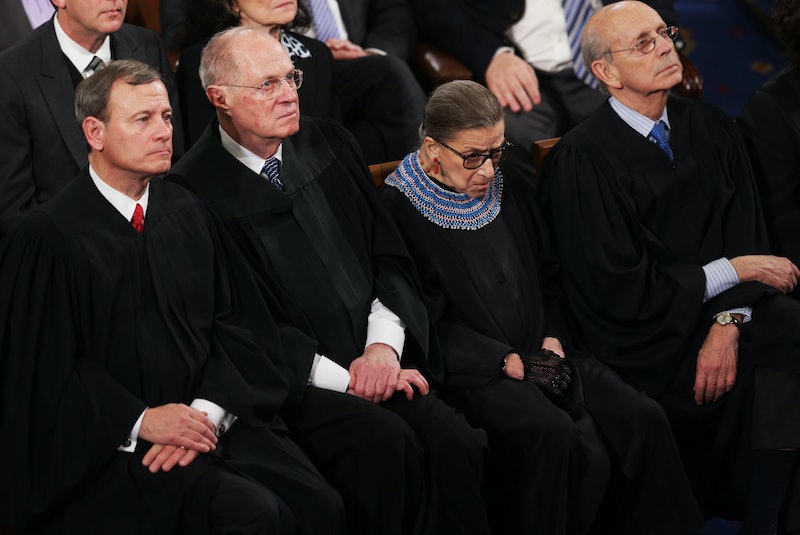 Just when you think you couldn't love SCOTUS superwoman Ruth Bader Ginsburg any more, she goes and admits that she dozed off at the State Of The Union because Ginsburg wasn't "100 percent sober" at the time. That's right: Ruth Bader Ginsburg, the badass judge you want to be when you grow up, did at the 2015 State Of The Union what you do Monday nights in front of the Bachelor: drank wine and had a little nap. And, let's face it, if you attended the State of the Union every single year, wouldn't you want a little kick to get you through?

At a panel discussion Thursday, Ginsburg said — and I warn you in advance that you're going to want to read this quote a few times, to really savor it —

We sit there, stone-faced, the sober judges, but we’re not — at least I wasn’t — 100 percent sober, because before we went to the State of the Union we had dinner together, and I vowed this year, "Just sparkling water, stay away from the wine!" But in the end, the dinner was so delicious it needed wine to accompany it.

Stone-faced! Sober judges! Ginsburg knows exactly what you think about Supreme Court, and not only is she out there every day battling for your rights with epic dissents, she's more than happy to play up to that image. Except she's secretly, quietly a little tipsy on that nice dry white wine and Obama has been droning on for freaking ever and can she just close her eyes for one second, please? Just one second? — Zzz.

The Notorious RBG: making America more progressive by day, relaxing with a nice Zinfandel by night. Hell, maybe she even plays beer pong with Bill Clinton, who appointed her in 1993, on Saturday nights. I wouldn't be even a little surprised if Ginsburg was a secret party animal.

And if you thought you'd reached peak RBG love... well, you're wrong. Watch this.

You can watch the full video of Ginsburg at the panel here.