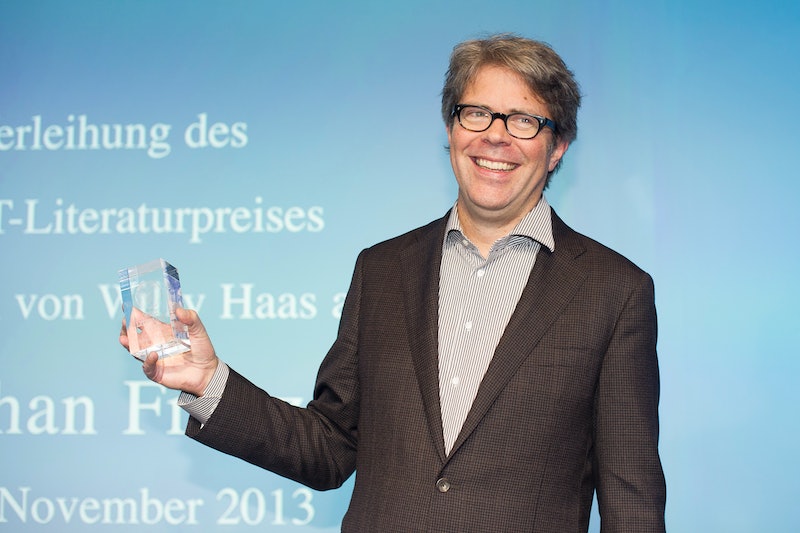 Author Jonathan Franzen has never shied away from speaking his mind on everything from Twitter to Oprah's Book Club to e-books. The first is "unspeakably irritating," the second is "for women," and the third is "corroding values," according to the writer. And now Franzen is criticizing young adult literature, saying that it equates to "moral simplicity." Come on, Franzen, this is a tired insult; we YA lit lovers have heard this one before.

Franzen spoke with Butler University as part of a visiting writers program, where he took part in a Q&A, a reading, and an interview with an MFA candidate. It was in that interview that the MFA student Susan Lerner brought up Ruth Graham's piece on adults reading young adult novels. You remember the one: She said that adults should be embarrassed for reading and enjoying stories directed at teenagers. Lerner asked Franzen what he thought about Graham's piece about adults substituting “maudlin teen drama for the complexity of great adult literature."

Franzen, at first was tightlipped, saying that he didn't care what people read. That if adults wanted to pick YA over adult novels, if it was a loss: "It's their loss, not mine." But when pressed, Franzen had this to say:

Most of what people read, if you go to the bookshelf in the airport convenience store and look at what’s there, even if it doesn’t have a YA on the spine, is YA in its moral simplicity. People don’t want moral complexity. Moral complexity is a luxury. You might be forced to read it in school, but a lot of people have hard lives. They come home at the end of the day, they feel they’ve been jerked around by the world yet again for another day. The last thing they want to do is read Alice Munro, who is always pointing toward the possibility that you’re not the heroic figure you think of yourself as, that you might be the very dubious figure that other people think of you as. That’s the last thing you’d want if you’ve had a hard day. You want to be told good people are good, bad people are bad, and love conquers all. And love is more important than money. You know, all these schmaltzy tropes. That’s exactly what you want if you’re having a hard life. Who am I to tell people that they need to have their noses rubbed in moral complexity?

Sighs. What's easy is resorting to the argument that YA isn't complex. That it's "schmaltzy" and that it always ends with love conquering all. Like most people who haven't read a whole lot of YA, Franzen rests on what he believes to be truth rather than what is the truth. As anyone who doesread it knows, there is a whole lot of complexity in YA as a whole. And just as in every category of literature you can choose, there is some "moral simplicity," too.

I'd advise Franzen to read two books that were published just this month: This Side of Home by Renee Watson and I'll Meet You There by Heather Demetrios and claim moral simplicity. Or going back further, what about Jandy Nelson's I'll Give You The Sun? Andrew Smith's 100 Sideways Miles, John Corey Whaley's Noggin, or Laurie Halse Anderson's The Impossible Knife of Memory? Do you think Franzen had read even one of these before making his comments?

Also, who is he to say that some of us don't read Alice Munro after work? (As, it's presumed, he does?) We should all take offense at how he imagines readers as tired, frustrated at the world, and needing escape, because that certainly is not the picture of engaged, excited fiction readers I know.

You know, though? We can't even get riled up over this because we've all heard it before. Frankly, Franzen, you are one of the most famous contrarians in the public eye right now, so I expected a little more in your argument against YA.