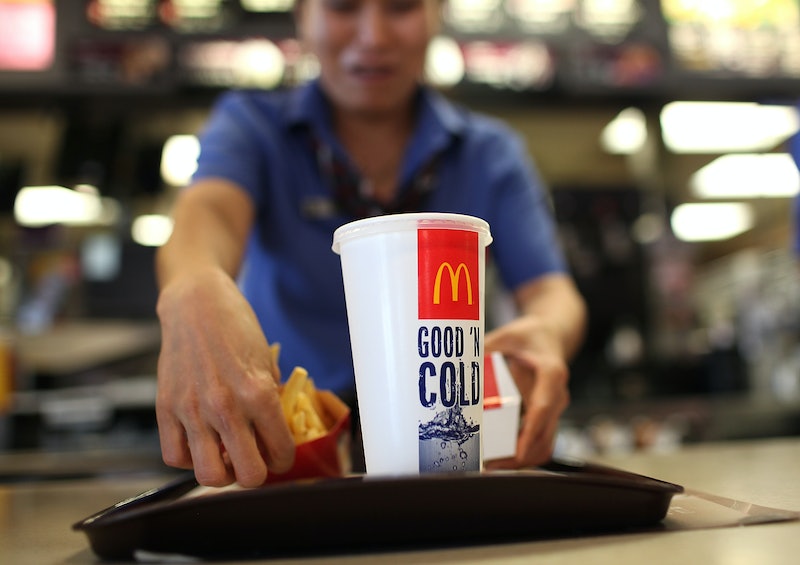 On Feb. 1, during Super Bowl XLIX, McDonald’s rolled out an ad for what would be one of their most memorable campaigns in recent history. It was part contest and part therapy; it was McDonald’s Pay With Lovin’ promotion. For a limited time, select customers would be chosen to pay not with money but with forms of “lovin’,” like hugging the person they’re with, calling up their mom and telling her they love her, or even a simple high five.

When its ad initially aired, a spokesperson for McDonald's told ABC News:

We want to thank our customers for making our day and hopefully they will make someone else’s as well — that’s what Lovin’ is all about. From selfies, hugs to high fives — we have a bunch of fun ways to express your Lovin'.

Unlike others who saw and loved the commercial that aired during the Super Bowl, my initial reaction to this campaign was steeped in cynicism. The ad, a Hallmark-style montage of McDonald’s employees dancing with customers and families hugging, made it seem as if getting a burger for free would solve all of life’s problems.

But cynicism aside, it was still free food, and at the end of the day, that’s something I could get behind unconditionally. So, I made the half-mile trek and endured the slight weight gain that goes along with trading salads for Big Macs to try my luck.

I couldn’t go until Wednesday, when the odds of the contest had already drastically fallen. According to the official contest rules, on the first two days of February, Monday the 2nd and Tuesday the 3rd, there were 35 prizes and 20 prizes per day, respectively. On the third day, the odds went down to 5 prizes a day. So I was really pressing my luck.

I had also read that the winner was chosen based on which door they walked through (right or left side), so when I went with my boyfriend, I told him to go through a different door to improve our odds. However, when we walked through the entrance, we realized that at this particular store, the counter had no view of the door, so our strategy was moot. Things weren't looking good for me.

Not surprisingly, I didn’t win. I had ordered a Double Bacon Cheeseburger meal and my boyfriend had ordered a Filet-O-Fish (don’t ask me why). When they rung us up, I eagerly waited for them to say, “Your total is… a synchronized tap dance routine!” Nope, my total was $14 and change. I asked one of the women behind the counter if they had chosen any winners yet that day, and she told me, "Yeah, you just missed one!" Literally, a few minutes before I walked in, someone had been chosen to pay with a high five. When I asked why a high five, she said it was because he was alone and the store was a bit busy, so she didn't want to make him pay with something elaborate. (Like, I don't know, a Skype session with his grandfather in Korea?)

I never thought to choose my home based on its proximity to McDonald's, but in the past two weeks I wished I lived inside one. Because the closest one to me was pretty out of the way and freelance life is like juggling your time with your sanity, I didn't make it to Mickey D's again until Saturday. But since it was the weekend, I could stake it out a bit, see if I could witness a lovin' transaction.

Thinking that perhaps I had ordered too much the last time I was in there and that had influenced my lack of success, all I ordered this time was a coffee and a four-piece pack of Chicken McNuggets from the Dollar Menu. After I ordered, I braced for it again — cartwheels up and down the aisle? Hug the solo man in the corner who's muttering to himself? Call my frenemy and admit that I didn't really "forget" her birthday? "That'll be $2.73, please."

I was starting to get a little cranky. Was my lovin' not good enough or something? I swear it's clean, honest lovin'! So I took my coffee and my McNuggets and I parked myself at the bar where other solos were sitting and kind of just staring into space. The muttering man suddenly said, "I try so hard but it still doesn't work," followed by a few halfhearted sobs. Clearly, he could use some lovin'. I was tempted to reach over and give him a side hug, but he started muttering with more emotion and vigor. Eventually I realized he was half-singing along to whatever song was playing, which sounded like either Michael Bolton or Rod Stewart. So yeah, that was my Saturday afternoon. After a couple hours of Whatsapping and reading my New Yorker, I still hadn't witnessed a Pay With Lovin' moment, so I decided to give up for the day. Maybe the third time will be a charm.

Yes, I know. The contest was almost over by now. But I had yet to see anyone pay with lovin', so I braved one more genetically modified meal for the sake of journalism.

I went in with my laptop in tow, so I could look "busy." Never mind that this was now my third time here in a week and the custodian greeted me like he knew me personally. This time I decided to go all out, have the classic McDonald's experience. So I ordered a Big Mac meal. I had recently done an article about the Big Mac sauce and how people go crazy over it, so I was particularly curious to see what all the fuss was about. (It had been years since I had a Big Mac.)

As he punched the order in, I said a little silent prayer, hoping he'd say, "And your total is... make out with that guy behind you!" OK, I didn't hope for that, but you get my point. I wanted to win. I felt like I had earned it. In the last week, I had eaten more fast food than I have since I was 8, and I was starting to feel the effects. My body was starting to protest, like a vending machine that rejects crinkly dollar bills. Anyway. Speaking of dollar bills...

"That'll be $7.98, please." Sigh.My rejection was palpable, and I almost offered some lovin' anyway, just to say I paid with lovin'. Can I tip with lovin'? Well, I wasn't going to go home empty-handed. Just because I didn't get to experience first-hand the kind of spontaneous lovin’ that can erupt while in line for a McFlurry didn't mean I couldn't get someone else's story. So I talked to the employee who rang me up. His name was Eddie. He seemed optimistic about life, love, and burgers. When I asked him about the Pay With Lovin' promotion, he assured me that there were some real emotions to be had at the counter. "It's been going good. The responses are positive and a lot of people are happy, especially when the food is free."

Free food = happiness. That's an equation that should be in science books. So what kind of lovin' has he charged personally? "Once I made a guy hug his dad, and it was a good moment between family."

And how are these winners selected? "It's at certain times, like at the beginning of the day, they choose certain times that they wanna do that day. And at those times when the person comes in, the manager will let you know to do Pay With Lovin'."

When asked if they have predetermined tasks for the day or if they think of something on the spot, Eddie told me that he likes to keep it spontaneous. "I'll think of it, yeah. Sometimes I'll just tell them to hug the person next to you or call someone, or give me a high five."

Even though the Pay With Lovin' ad ran during one of the most-watched television events of the year, with an estimated 114 million viewers, Eddie told me that most of the winners were surprised by McDonald's bighearted move. "Yes, they're surprised. They're like, "Pay With Lovin' — what's that?" And then we have to explain. But they're definitely happy about it."

When I asked if he had seen anyone cry out of emotion, like the customers in the ad, he replied, "No, not that I've seen."

How I Feel About It Being Over

I'm walking away from this McDonald's experiment with a few takeaways. Firstly, the Pay With Lovin' contest didn't reward nearly enough people, from my limited observation at least, and I, for one, felt rejected by the lovin'. The chain should have chosen something like one out of five people to pay with lovin'. We could have made it rain with lovin' in every McDonald's!

Secondly, McDonald's food is strangely addictive. Once you have it, you'll begin to crave it, and that craving grows more intense the more frequently you have it.

Finally, there is not nearly enough Big Mac sauce on the Big Mac.

It took me a while just to locate it, but I found some sauce smeared on top of the iceberg lettuce. McDonald's, if you want my lovin', you're going to have to load on much more than that.

More like this
10 Thanksgiving Alternatives You Can Celebrate This Month
By Katie Mitchell
How Long Does Leftover Stuffing Last? Here's When To Toss It
By Chelsey Grasso and Alexis Morillo
Pepsi’s Festive Flavour Is Finally Coming To The UK
By Sophie McEvoy
Heinz Just Relaunched A Bean-Tastic '90s Fave
By Sam Ramsden
Get Even More From Bustle — Sign Up For The Newsletter