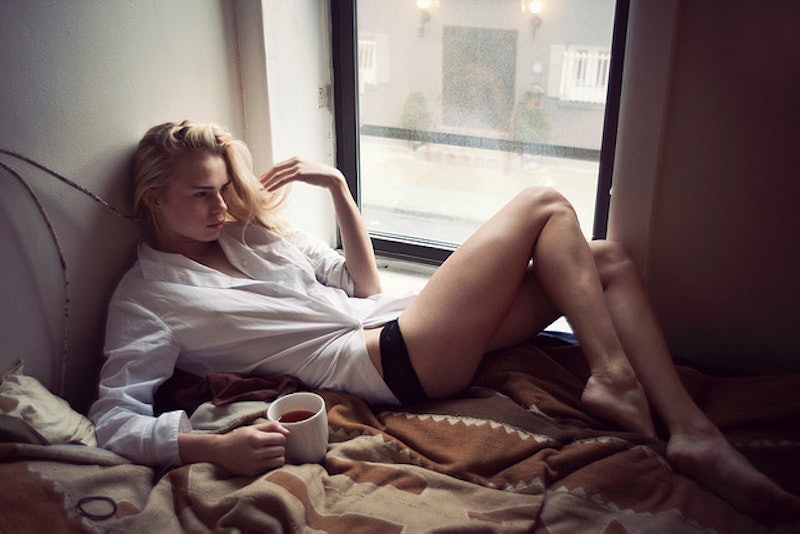 On Sunday, one moment, you're merrily working out or running errands or paying $40 for some eggs and a mimosa that tastes like grain alcohol; but a few hours later, you're deep in the throes of Sunday afternoon depression, feeling super anxious about the work week ahead, and doing online research on faking your own death and starting a new life in at a fish cannery in Alaska. What's the deal? Why can Sunday afternoons get so depressing?

Well, the good news about Sunday depression (if there is any) is that you're not alone if you feel it — in fact, a 2013 Monster.com poll found that 78 percent of workers feel Sunday night sadness (with 59 percent of Americans surveyed reporting that their Sunday night depressions got "really bad"). A 2012 poll pinpointed that for most of us, Sunday night stress begins for most people at 4:13 p.m. — a.k.a. your last moments of weekend sunshine during the winter months. And Sunday depression isn't a new phenomenon, either — nearly 100 years ago, psychologist Sandor Ferenczi wrote a scholarly paper called "Sunday Neuroses," which noted that his patients often felt their worst (and recalled their most painful memories) on the last day of the weekend.

Why Sunday? For a lot of us, the Sunday dread began during our school years, when Sunday night meant the end of weekend fun and a return to homework, school stress, and Jennifer the Most Popular Girl in School telling you your hair smelled like lunch meat. And as adults, well, Sunday night means roughly the same thing — a return to work responsibilities, job performance stress, and Jennifer the Meanest Person in the Office passive-aggressively hiding your coffee mug. And it's not only people who hate their jobs and work situations who feel the black dog of Sunday sadness breathing down their neck— the Sunday blues hit plenty of folks who love their jobs (like me, for instance), but still get overwhelmed with worries about performing work duties in the coming week.

So are Sunday blues just a part of life? Are there any steps we can take to try to lessen their brutal grip on our soul? Nothing's surefire, of course; but there still a few things you can do to try to relax, reboot, and not stay up all of Sunday grimly visualizing all the TPS reports you're going to have to file tomorrow.

1. Make Sure To Do Something Fun On Sunday Afternoon

A full 75 percent of us don't leave the house on Sunday. That makes a lot of logistical sense — Sunday often feels like an ideal day to devote to tidying up, doing laundry, and otherwise preparing for the week ahead — but it can also definitely be a factor in why you feel bummed out. See if you can spread the housekeeping and errands across both weekend mornings and afternoons — leaving yourself time to do something fun on Sunday evening, like see an early movie, or eat a delicious taco (or five). Plan with a friend who also gets the Sunday sads, and force each other to actually stop moping and leave the house. Even hitting the gym can help. Not only will it make the day seem livelier, it will give you something to focus on besides tomorrow's work.

2. If You're Going To Go Out Drinking, Do It On Friday Night

For many people, hangovers aren't just about nausea, achiness, and the inability to do anything but watch House Hunters International — they also come coupled with some next-day post-drinking depression or anxiety. If this happens to you, try to restrict any wild nights out to Friday; that way, if you do experience an anxiety-filled hangover the next day, you'll still have the hopeful promise of a wide-open Saturday to help you cope, instead of trying to deal with it on top of your regular Sunday anxiety.

This goes quadruple for hitting up bottomless mimosa brunches on Sunday morning — I mean, hey, you're an adult, you can make these decisions for yourself, but if you find that your Sunday boozy brunches tend to lead to panicked weeping fits a few hours later while you're watching The Good Wife, think it over .

3. Try To Think About The Exciting Things You Have Planned For The Coming Week

I can't count the number of times I've wasted a Sunday night obsessing about the one unpleasant task I had to attend to in the coming work week, completely ignoring all the fun social plans and exciting work projects I had slated for the coming days. This can lead you down the path to "My Life Is A Mess What Is Wrong With Me I Am Sadness Itself" City, and trust me, that way lies only leads to madness.

So decide for yourself what you're going to focus on on Sunday. Take time to think specifically about the cool shizz you have coming up next week. You might even want to try writing out a list of a few things you're looking forward to — seeing something written down can be powerful, and make things seem more real than when they're just in your mind.

4. Write Down Anything That's Bothering You

Because I am a reasonable person and not an article from O Magazine come to terrifying sentient life, the word "journaling" makes me totally uncomfortable. But there's no denying that taking a few minutes to jot down a page or two of stream-of-consciousness writing about what's on your mind can take the edge off. In fact, journaling has proven stress and anxiety reduction benefits.

So set aside a short amount of time — as little as 10 minutes can help — and just write out whatever's on your brain. Because sometimes, typing out the things you're dreading about Monday is enough to help you dread them a little bit less.

I also can't count the number of Sunday evenings I've spent attached to my laptop, furiously pounding out work that I had all weekend to get a start on. Is it any wonder that this inevitably led to catastrophic thinking about the work week ahead? So try your hardest to not leave work until Sunday night. Doing it on Saturday is probably best, but even Sunday morning isn't as bad; just keep your Sunday afternoon and evening as free of work-related pursuits as possible.

6. Give Yourself Enough Time To Really Relax Before Bed

Aim to hit the actual bed time you need to feel well-rested — a.k.a. not accidentally staying up until 3 a.m. reading the Wikipedia listing of famous unsolved deaths — and genuinely devote the hour or two before bed to relaxing however you like to relax. Take a bath, listen to some podcasts, masturbate, read an absurd home design magazine — whatever chills you out. But you might want to try to find ways to relax that don't involve a nightcap — booze before bed can mess with your sleep cycles. (Yeah, I want a tumbler of whiskey before bed, too. Try rubbing one out instead and see if it does the same job.)

7. Stay Away From Your Phone And Computer

I know, I know — maybe unplugging for the last few hours of the weekend isn't an option at your job. If you do have to get on your phone, try using an app that filters the screen's blue light, which many researchers think can disrupt our sleep cycles. But if you can swing it, give unplugging a shot — not only does looking at a computer screen before bed negatively impact your sleep cycles, but giving yourself a little time off at the end of the weekend might actually make you more productive on Monday (and will definitely give you less to worry about on Sunday).

And remember: It's only five more days till Friday.