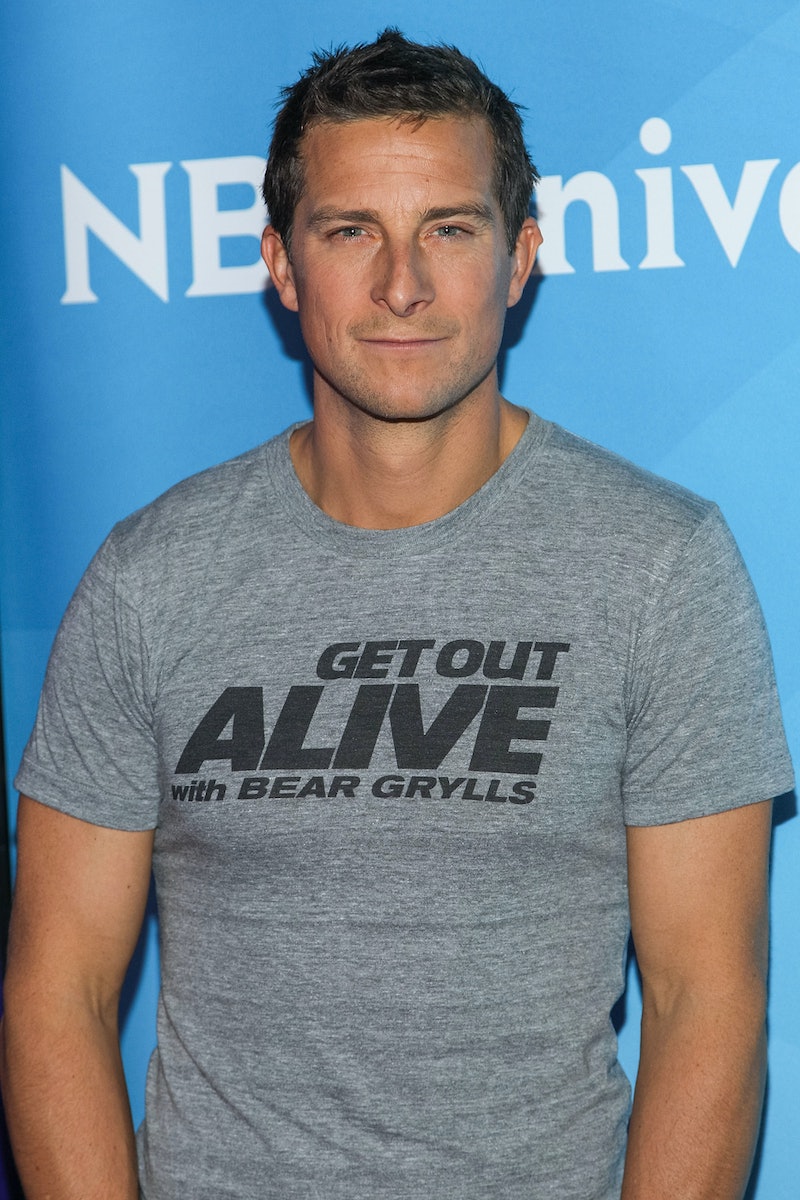 If Bear Grylls is going to appear on a typical morning talk show, do you think he'd roll up in a car and walk through the front door like everybody else? No, of course not! This is Bear Grylls: Obviously, he'd scale the building and suddenly smash through a glass window long before he'd actually take an elevator, and that's exactly what happened on Friday morning. While most of us were still asleep, Bear Grylls crashed through the window of the UK's This Morning talk show, effectively giving me and the rest of the worriers of the world some major anxiety. From watching the video, you can tell the stunt is definitely planned, since the anchors feigned shock when he came in like a wrecking ball — but seriously, Grylls? I realize you have a new show to promote, but that was real, actual glass. One wrong move and he could have totally impaled himself on live TV.

But of course, for him, that's no big deal: As anyone who's an avid watcher of his shows knows, Grylls pulls crazy stunts like this all the time.

OK, so maybe it's his job — shows like Running Wild With Bear Grylls and his latest, Mission Survive, both call for this kind of reckless adventure, and he's pretty good at attempting scary stunts and coming out unscathed. Crashing through a huge glass window? That's kind of scary, but it's nothing compared to what he's done in the past.

Killing a snake with his teeth

If you can watch this without cringing and/or dry heaving, you are officially a far stronger person than I am. In this stunt, Grylls puts a snake's head in his mouth, bites it to break his neck, and then wears the snake like a scarf. I can't even handle that this is a real thing that a real person has done before.

Jumping off a 120 foot cliff with Zac Efron

I'd definitely jump off a 120 foot cliff if Efron was waiting at the bottom. Would I repel down it very slowly and very shakily with a man who wears snakes as accessories? Probably not.

Pulling a sheep out of a swamp and eating its heart

Yes, this is exactly as disgusting as it sounds.

Drinking his own urine

What would you rather: Eat a sheep's heart, or drink your own urine? Grylls, you're aware that if you just stay out of the wilderness we have bottled water and cheeseburgers here, right?

Climbing inside a dead camel

Just. Why? Why would anyone do this? Don't miss the part where he takes fluid from inside of the camel and wiping it all over his face.

HALO jumping out of a helicopter

HALO means high altitude, low opening, and for Grylls, it means he jumped out of a helicopter from 30,000 feet in the air. Yeah, I'll stay on ground, thanks.