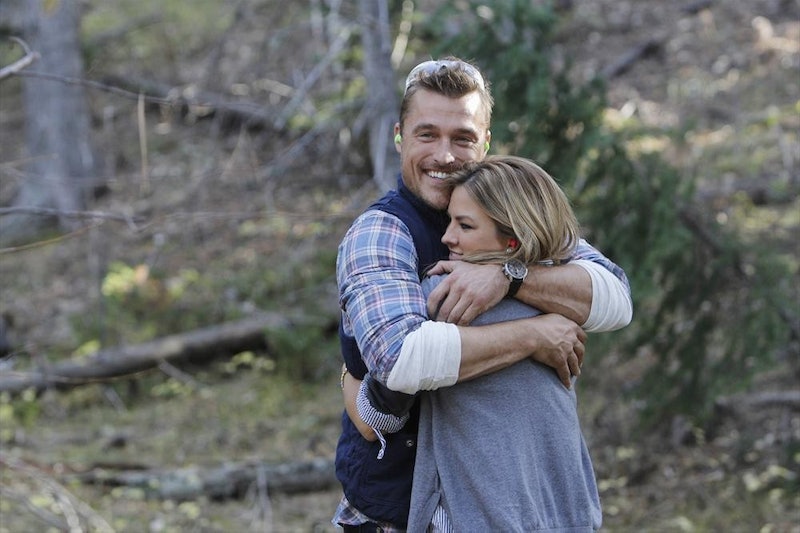 This season of The Bachelor is kind of blowing by, huh? Chris is already down to seven women, and while I like the guy, I'm not sure we've heard him say one coherent sentence yet. Chris is everything producers would assume they wanted in a Bachelor: handsome, charming, not a clear cut skeeze, but maybe has a mystery tent coitus up his sleeve with the right editing. But who knew you could be charming without actually being able to speak words sometimes? His response to Ashley I after she got upset with him for telling Kelsey about her comments last week, verbatim: “I mean, I’m just doing... I’m just trying to… I couldn't... not hear her out.” His inability to express his emotions to these women each week is kind of putting a big ol' question mark on how Chris' Bachelor season is going to end up. Does he like them as much as he says? Less than he says? Did he actually say anything at all just then?

Before Chris's season premiered, there was plenty of talk of Chris "pulling a Juan Pablo" without a lot of clarity on what that meant. But the dark cloud that covered the latter half of Juan Pablo's season seems less and less likely because even though some people were still in on Juan Pablo at this point in his season, he had already sufficiently slut-shamed Claire, told Renee he wouldn't kiss her because she was a mom, and wounded Chris Harrison's delicate sensibilities so badly, you can still see the hurt in his eyes. Chris has done none of those things... he's just a little clueless. So clueless to the normal mechanics of this show in fact, that it's becoming increasingly difficult to tell which way this thing might swing. Thus far, Chris has only shown any real favoritism toward Britt, and as he was so taken with her "fresh-faced" beauty when he woke her up and she was wearing a full face of makeup, I have to assume those two are wearing some blinders as far as their compatibility beyond the realms of physical attraction goes.

Chris is kind of a wild card at this point, and considering the sheer amount of tears when he saw in the trailer that preceded this season, things still stand to go South. But my hope is that Chris really is the good, boring dude he says he is, so here are a few ways this season could end, ranked worst to best, along with likelihood with which they might happen, on a scale of one to ten.

4. Chris Chooses No One

The worst — absolute worst — thing you can do within the Bachelor franchise is not choose someone to spend the rest of your life with after spending a collective 10 hours with them over the course of two months. Among other things, it shows that you were there for the wrong reasons, don't value love, marriage or morality, and probably practice at least some form of Satan worship. While it's likely that Chris will choose someone in the end, it's not that totally out of the question that he would opt out. He seems to be both a man of principle and a man not finely tuned into his emotions, so I don't see him getting down on one knee without being 100 percent sure.

3. That Pregnancy Test Comes to Fruition

Now, this would be a magical television moment, though perhaps not a magical life moment for the two people that conceived a baby on The Bachelor. One extended trailer that preceded Chris' premiere featured a blurred pregnancy test in the trash can, and while Chris has directly said he had nothing to do with it, if it's in the trailer, it's fair game. The only reason this season has a zero percent chance of actually ending in Chris becoming a papa is because you better bet, if he had, The Bachelor editing team would have shown a lot less restraint in teasing it.

2. Chris Ends Up With a Wild Card

Much like himself, there are a few wild cards ladies left on this season of The Bachelor, either because we still don't know very much about them or because they don't fit the typical Bachelor mold. Sometimes a wild card like Sean's Catherine-pick ends up great; and sometimes you know one like Ben's Courtney-pick is totally doomed. Brit is looking more and more like she might fall in the Courtney category as the other women seem to believe that she's all about the single city life, when that's not the impression she's giving to Chris at all (all my own personal props to Brit though for her priority organization). Jade seems more like a Catherine, and a plausible final pick, as she's shy and more difficult to get to know, but Chris is clearly drawn to her.

And Kaitlyn is an actual wild card in that she is — I kid you not — funny, seemingly reasonable, and I am dying for her to be the next Bachelorette, so please don't pick her, Chris.

1. Chris Ends Up With a Sweetheart, They Move to Iowa and Live Farmily Ever After

This is all headed one direction, and we know it, and it just so happens to be the safest direction. Chris is going to pick a safe bet who will fit in with his perky, blonde sisters, and not mind spending the rest of her days in Arlington, Iowa pretending that a bar with four old men in it reasonably doubles as a coffee shop. Whitney, Carly, Megan, and Becca, lotion up your left ring finger and take up Sodoku or something, because it's a race to Iowa for you four.