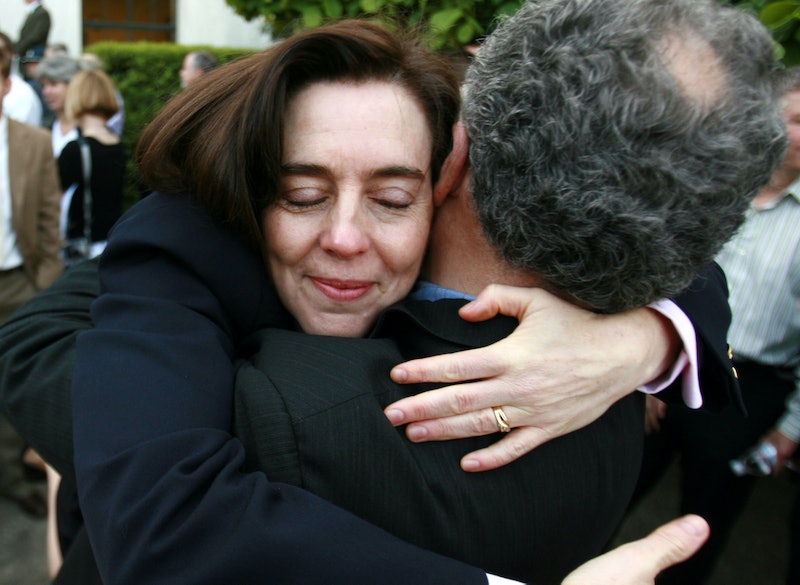 Maybe you've heard about the shakeup happening at the very top of Oregon's state government. Mired in a damaging, seemingly intractable scandal, longtime Democratic Gov. John Kitzhaber announced his resignation Friday, clearing the path for Oregon's Secretary of State to step in. And when that Secretary of State ascends, a historic moment for the LGBT movement in America will be taking place — Kate Brown will be the first openly bisexual governor in United States history, and that's a major milestone.

Brown is stepping into some colossal shoes with Kitzhaber's departure, that's for sure; he's leaving office right after winning a staggering fourth term as governor. As The Atlantic's David A. Graham notes, it won't be the first time that we've known a governor to be LGBT — you may recall New Jersey Democrat Jim McGreevey, who resigned after details of his sexuality were made public.

But that's far from the situation with Brown, who will be sworn in as Oregon's new governor having already gone 20 years as an openly bisexual politician. As a state representative back in 1992, according to ABC News' Ali Weinberg, Brown detailed her coming-out process, which was spurred by press coverage of her sexuality by The Oregonian.

As you'd expect, this wasn't without complications. As noted both by Weinberg and Graham, one of Brown's descriptions of coming out struck a particularly troubling chord It might not surprise you to know it was a Republican colleague, either — whether meant in jest or not, this is plainly not the sort of thing a woman should have to tolerate from her senior, male colleagues. From an essay Brown wrote:

At the beginning of the next legislative session sitting in the House lounge, representative Bill Markham, who is over 70 years old, extremely conservative, and a legislator for more than 20 years comes to join me. Over lunch he looks up to say, “Read in the Oregonian a few months ago you were bisexual. Guess that means I still have a chance?!”

What a great guy to work with, huh?

Brown is slated to be sworn in on February 18, barring any unforeseen issues. While Kitzhaber's scandal-plagued exit won't be forgotten — his resignation won't stop the ethics investigation against him — it's nice to know that there's at least such a significant silver lining.

And this is just the beginning. Brown is taking over with basically a full term left ahead of her! In four years, she could very well make even more history with a reelection bid. This, in other words, is a new state administration to keep an eye on.