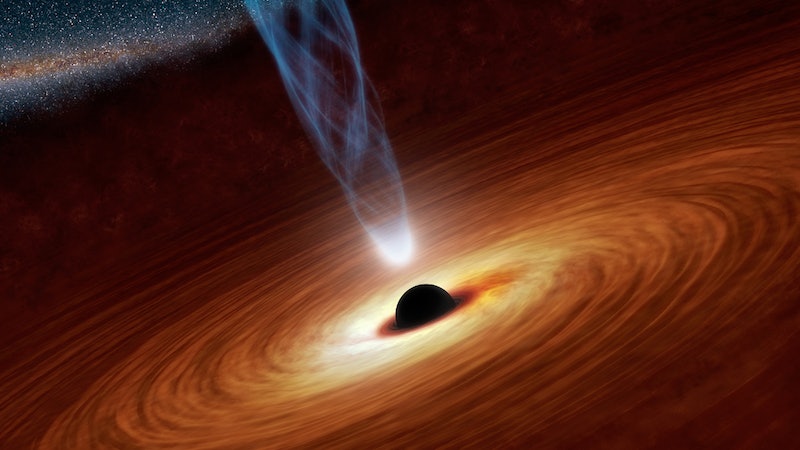 Science and entertainment are often at two seemingly opposite ends of the spectrum — but when they come together, they almost always produce something incredible (like the recent Cosmos miniseries or the BBC's Planet Earth). So, when the visual effects team from London-based special effects firm Double Negative and acclaimed theoretical physicist Kip Thorne came together back in 2013 to work on Christopher Nolan's behemoth space travel flick, Interstellar, they knew something special was about to happen. What they didn't yet realize at the time, however, was that their work on Interstellar would eventually yield unprecedented research on the science of black holes and, eventually, a revolutionary joint-research paper.

The paper was a joint effort between co-authors Thorne and Double Negative's Oliver James, Eugénie von Tunzelmann, and Paul Franklin, who had worked together to produce all of the breathtaking imagery in the film — enormous tidal waves, fiery spacecraft explosions, and all the mind boggling filaments of the tesseract. In order to accurately portray Gargantua, the colossal black hole which is featured predominantly in the film, the Double Negative team and Nolan both turned to Thorne to produce a scientifically realistic interpretation (something that had not yet been attempted in Hollywood).

"Neither wormholes, nor black holes have been depicted in any Hollywood movie in the way that they actually would appear," said Thorne in an interview with Wired last October. "It's the first time the depiction began with Einstein's general relativity equations."

As a black hole spins through space, it creates a peculiar lensing effect, bending the projected points of light from dozens of stars and the "bright plane of the galaxy in which the black hole lives," the team explained in a press release. Because of the rapid motion of the black hole itself, the projected images tended to aggregate on one side in flux, leaving Gargantua appearing lopsided.

In an attempt to portray the warped images in a way that would be less confusing to movie-goers, the team went back to the drawing board and developed a computer code known as the Double Negative Gravitational Renderer (DNGR), which would create the images of the black hole itself, and allow for the bent light to transition more smoothly. What followed was a realization that the new code could potentially have important implications in future physics research. Explained chief scientist Oliver James, in a press release on Friday:

To get rid of the flickering and produce realistically smooth pictures for the movie, we changed our code in a manner that has never been done before. Instead of tracing the paths of individual light rays using Einstein’s equations—one per pixel—we traced the distorted paths and shapes of light beams.

Once our code ... was mature and creating the images you see in the movie Interstellar, we realised we had a tool that could easily be adapted for scientific research.

The team was certain that the new theories could potential impact on the ways in which astrophysicists studied caustics ("peculiar, creased surfaces in space" explains the paper) and the way we view imagery of distant stars near suspected black holes. Continued James,

During the team's DNGR simulations, they began to realize that the peculiarities weren't just distorting star projections, they were sometimes doubling them or canceling them out entirely. It was the breakthrough moment they couldn't have known they were waiting for.

Since the discovery and the publication on Friday (as well as the publication of a gorgeous new, explanatory book by Thorne, entitled The Science of 'Interstellar'), James admits that he has been overwhelmed with messages from curious scientists who want to use the data that he and Thorne produced for future projects. In an interview with New Scientist, James said,