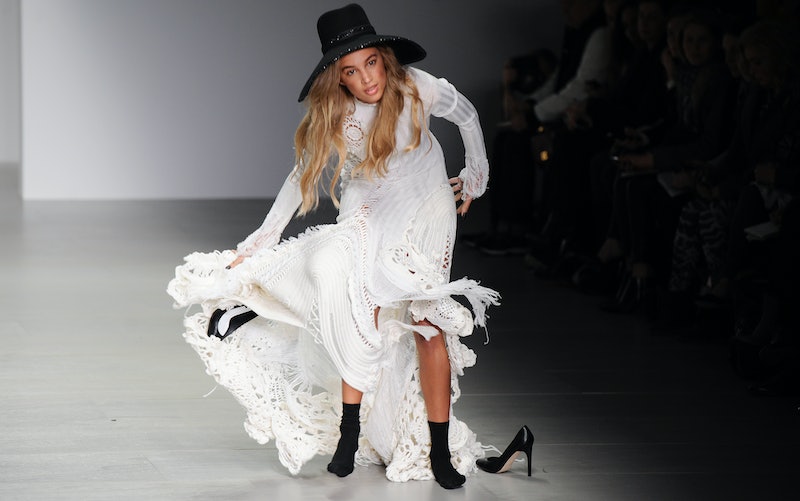 They say that no one is immune to the mayhem and oddities of Friday the 13th, and Fashion Week attendees and designers are no exception. Fashion Week day two began on the heels of Kanye West's hotly debated Adidas Originals show, and the antics only continued to become more peculiar. Friday the 13th itself is not an incredibly rare occurence; in fact, the date occurs several times a year, but when paired with Fashion Week's eccentrics, the result is nothing short of bizarre. Celebrities debuted radically different looks, the subjects of past political intrigues inexplicably became intertwined with Fashion Week, and of course there was the obligatory nudity scandal which seems to accompany February runway shows each year. Call it a case of hypothermia-turned-insanity, or simply superstition getting the best of Fashion Week, but the latter half of the week proved to be inexplicably laden with curious incidents.

Catherine Giudici, former Bachelor contestant and now the wife of Season 17's star Sean Lowe, raised eyebrows when she displayed newly-minted blue brows at Fashion Week's Desigual presentation, Us Weekly reported. Though Giudici's eyebrows made their first red carpet appearance on February 12, one could only attribute the dye job to a case of Friday the 13th hysteria.

2. Monica Lewinsky Made A Surprise Appearance At Rachel Comey's Show

Monica Lewinsky may be known for her storied tryst with President Bill Clinton, but according to People Magazine, the former White House fixture wishes to be recognized for her taste in fashion henceforth, not men. Lewinsky arrived at Rachel Comey's intimate Fall 2015 presentation and celebration, turning more than several heads when she somewhat unexpectedly appeared.

3. North West Decided Not To Follow In Her Mother's Footsteps

An extraordinarily distraught North West wept tears of anguish while viewing Kanye West's Adidas Originals show. Whatever the reason behind the meltdown, the true shock wasn't the nonplussed Anna Wintour's deliberate disregard of the incident. In fact, it was North West's apparent abhorrence of Kanye's show and Fashion Week itself that was most shocking. A Kardashian who doesn't enjoy sartorial pastimes or occupying the spotlight is a novel concept, indeed.

The septum ring trend has subtly grown from a rare occurrence to perhaps the most beloved, offbeat fad of 2015 Fashion Week. This week, however, the trend reached such epic proportions that publications from Lucky to Refinery29 have deemed the trend a staple of the season. It's safe to say that no one could have predicted this trend.

In perhaps the most eye-widening news of Friday the 13th since the first wave of critics viewed 50 Shades Of Grey, Balmain Designer Olivier Rousteing revealed his nude shoot for the publication Têtu. While the shot certainly doesn't hold a candle to Kim Kardashian's full frontal snap, it is a rare sight to see a couture designer sans his clothing.