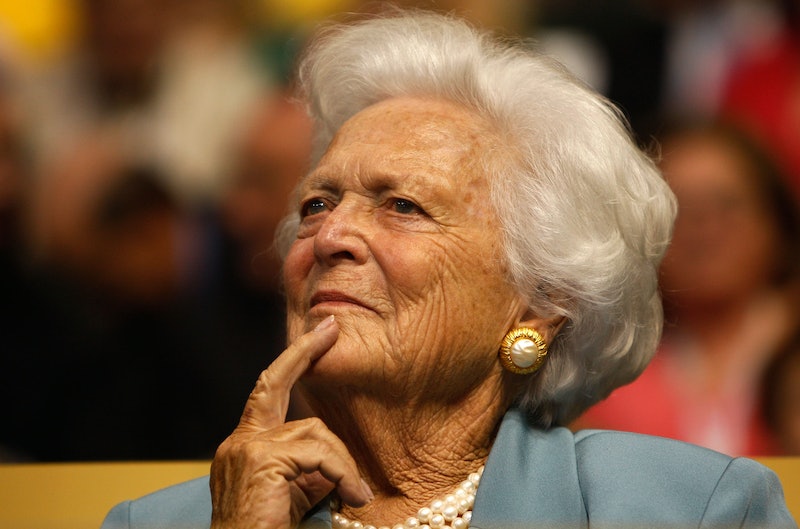 Come January 2017, there may be yet another Bush living in the White House. Although the top two presidential candidates in the 2016 race are hardly set in stone, we're potentially looking at a classic Bush-Clinton showdown — and if the American public swings to the right, a third Bush in the White House. But what does former first lady Barbara Bush think about son Jeb Bush's presidential candidacy?

"I changed my mind," Barbara Bush said via Skype (of all things) at a dinner for Jeb Bush and his supporters on Friday night. After initially dismissing the idea of a yet another Bush presidency, it seems like Barbara is all for her youngest son having his spot in the Oval Office, because why not?

"What do you mean, ‘Too many Bushes’?" the Bush matriarch added, referencing her comments made on the "Today Show" in 2013. Back then, Barbara Bush didn't believe her youngest son should run for president, saying it was time to let another American family have the reins:

He’s by far the most qualified man. But no. I think it’s a great country. There are a lot of great families, and it’s not just four families or whatever. There are other people out there that are very qualified. We’ve had enough Bushes.

Apparently, we haven't had enough Bushes. What's one more?

Following Barbara Bush's admittedly adorable Skype endorsement of her son's anticipated presidential run, Jeb Bush quipped, "Hey mom, can I get that in writing by the way?" He didn't, so a Skype message will have to do for now.

As Mitt Romney has officially — and shockingly — pulled out of the 2016 presidential race, Jeb Bush is shaping up to be the frontrunner. Or at least, the most enthusiastic — and wealthy — possible candidate. According to The Washington Post, Jeb Bush has been on a roll lately, raising an astounding number of funds from his supporters. At a Manhattan fundraiser for the former Florida governor held earlier this week, donors were charged a minimum of $100,000 a ticket. Yeah, I think Jeb Bush is doing alright, money-wise.

According to a recent Quinnipiac poll surveying residents in Ohio, Florida and Pennsylvania, Jeb Bush and Hillary Clinton received the most support for the Republican and Democratic nominations, respectively, in all three states. It's early yet, but with the way things are playing out, it looks like the American people may have to choose between two dynasties in 2016.