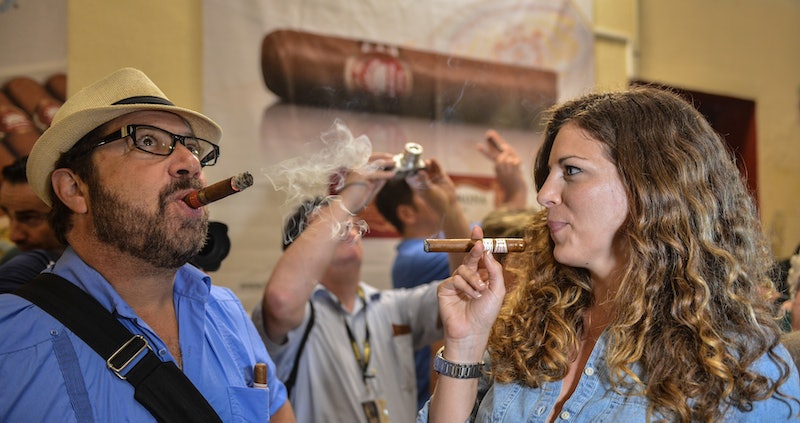 The new U.S.-Cuba relationship moved another step forward on Friday, after the State Department announced that the U.S eased restrictions on imports of Cuban goods and services from the island's private entrepreneurs, with exceptions. A list published by the State Department detailed the kinds of goods that Americans were allowed to import from private businesses, which was pretty much everything — besides food and agricultural products, alcohol, minerals, chemicals, textiles, machinery, vehicles, and arms and ammunition. There are no restrictions on services imports.

Although the items excluded from this opening might spell disappointment for those looking forward to the country's signature products (sorry, Cuban cigar and rum aficionados), the move signaled a potential loosening of the U.S.' 50-year trade embargo on the Caribbean island. Although an embargo can only be lifted with Congress' permission — which could prove troublesome for President Obama, as many Cuban-American Republicans, like Sen. Marco Rubio, are against the new U.S.-Cuba deal — the easing of import regulations is a step in the natural progression of both countries' normalizing of relations.

The stipulations also include that imports must be produced by a Cuban operating in one of the dozens of categories of private enterprise allowed by the island's government. Most of the categories are for services, not goods that are potentially exportable, reported the Associated Press. And since almost all Cuban exports are produced and shipped by state-controlled institutions, there is, in reality, little that can actually be exported to the U.S.

But Pedro Freyre, head of international practice at the Miami-based law firm Akerman LLP, told the news wire that the move opens up a the possibility to reach huge market a mere 90 miles away, and could inspire private Cuban companies to cultivate new products explicitly aimed for export to the U.S. Similarly, Americans can also look to the Caribbean island, said Augusto Maxwell, another lawyer at Akerman LLP, for business openings that were not previously available. Maxwell said:

I think it’s historic because its creating the architecture by which Americans can now look at Cuba and see what the business opportunities are. American capitalists can now go there and decide whether it makes economic sense to import things.

That the list does not ban any services also opens up a myriad of opportunities for the island's well-educated population, including Cuba's first-rate doctors, architects and engineers, reported Politico.

For those who really want a taste of Cuban rum and cigars, though, there still is hope — U.S. citizens who travel to the island in certain official capacities under the new deal are allowed to bring back up to $100 in Cuban alcohol and cigars, but only for personal use.