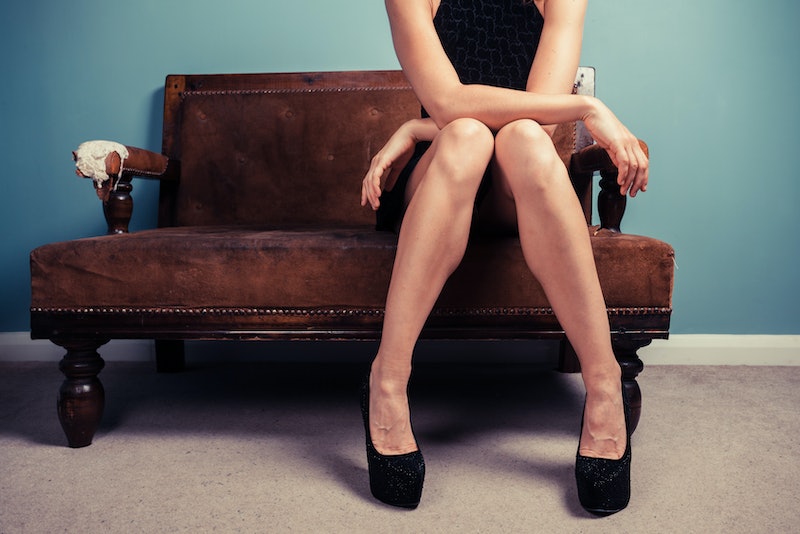 If you've been given any kind of sex ed in high school, chances are that the hymen was described as some kind of "obstruction" in your vagina that will tear when you eventually have intercourse, sometimes causing bleeding and pain. We tend to talk about it as some kind of road-block or wall of tissue, possessed uniformly by every woman, that needs to be broken down (literally, "breaking the hymen" is the term most used) before you're officially not a virgin.

Aside from the problem that the hymen is still considered a completely nominal way of determining virginity — when lots of sexual activity doesn't involve going near it, for one thing — the way we've been trained to talk about it as a body part, and by extension to talk about sex, pain, and our expectations of first times, is completely wrong. Women do have hymens (mostly), but that's basically where the accuracy ends.

Whether this radical inaccuracy comes from tradition, ignorance or squeamishness, it's a problem. Not understanding how the hymen truly works can be a serious impediment to understanding what the hell actually happens to it in a sexual situation. It's particularly serious in places where virginity is a marker of a woman's value and status, and where hymen breakage (and "evidence" thereof) indicates that she was a virgin before marriage.

We all need to be better at this. Even if you left your hymen by the wayside many years ago, it's still something to be aware of. So here are seven myths about hymens — completely busted.

Myth #1: The hymen is a membrane to be penetrated.

This, of course, makes complete sense. If we all had a blockage shoved up our parts until we deigned to get down with somebody, menstruation would be impossible. We are all born with a wide, complete hymen that fits this common conception, but it stretches and develops openings as we develop and reach puberty. Rarely, some women are born with what's called an imperforate hymen, which does actually block the vagina permanently, but it's usually corrected with surgery.

Myth #2: Everybody's hymen is more or less the same.

The Truth: Just like there's no one perfect model vagina, there's no normal hymen. The doughnut can have many different configurations — most are thicker towards the bottom, closer to the anus — and can be made of thin, pink mucus membrane, or thicker, white tissue that's a little tougher. It's often fringed rather than complete, with many small tears or holes. Medical science recognizes at least four kinds of hymen configuration, the annular, septate, cribriform, and parous introitus – the septate, for example, means you've got a hymen with extra bands of tissue extending across your vaginal canal. It can also look like a honeycomb.

The variations are many, which accounts for why there are so many different ways for people to experience and interact with their hymens – including losing their virginity, which we'll get to in a minute, hold your horses.

Myth #3: The hymen is located deep inside your vagina.

This is a general sort of myth I've noticed: that the "maidenhead" is supposed to lie deep within your vagina, waiting until the proper organ (a dude) comes to break it. Like Sleeping Beauty, except the proverbial high tower is your vaginal canal.

The Truth: This is nonsense. The hymen's often actually very close to the vaginal opening, at most 1 or 2 inches away.

The Truth: This is the big one. The tissues that make up the hymen's ring are stretchy. They, like all membranes, can bend and tear according to the pressure put on them, or simply stretch to accommodate it. "Breaking" your hymen isn't a good way to say it at all. "Tearing," while also not an all-encompassing term, is a good stand-in. They don't repair, but they certainly don't break in one way or one place. Also, they don't go anywhere: the tissue sticks around, gradually thinning away over time.

Myth #5: Bleeding while losing your virginity is the hymen's fault.

The Truth: This is painful to think about, but here it is: bleeding during the loss of virginity doesn't often have anything to do with the hymen at all, because it's made of very thin tissue that's supplied with little blood. Instead, any bleeding usually has to do with the tissue of the inside of the vagina itself, which is delicate and well-supplied with blood cells. If it gets pounded and isn't used to it, it'll bleed indignantly.

Myth #6: The presence of the hymen is a signifier of virginity.

The Truth: The pervasive idea that the "presence" of a hymen determines a woman's virginity is nonsense for many reasons: One is that hymens can tear through any insertion in the vagina, from masturbation to tampons, and even exercise has been known to tear them too. Hymens actually start to thin, tear, and develop holes when you're very small: it's just natural wearing away. Second, the hymen doesn't actually go anywhere once it's torn: it doesn't pop or vanish, it just sticks around, being gradually worn away. Third, the conception of virginity this myth is based on only applies to a very specific definition of sexual contact — penetration.

This is a particularly important point because we believe that doctors (or husbands) can simply look at a woman or girl's vagina and determine whether she's a virgin or not. It's a lot trickier than that. Contrary to belief, the hymen is no proof that you've definitely had sex, and the idea that they can act like this is deeply harmful.

Myth #7: First-time pain is because of your hymen.

The Truth: Considering what we've learned so far, this should be obvious. The vaginal corona can tear at multiple times during your life, varies hugely in strength and thickness, and is actually stretchy enough to handle a small amount of pressure – so, of course, the amount of pain reported varies wildly, with 63 percent of girls in one study reporting no pain at all. Pain during the loss of your virginity might be because of a hymen tear, but it's more likely to be because you're poorly lubricated or you don't know what you're doing quite yet. Or because of the aforementioned vaginal bruising. Ouch.