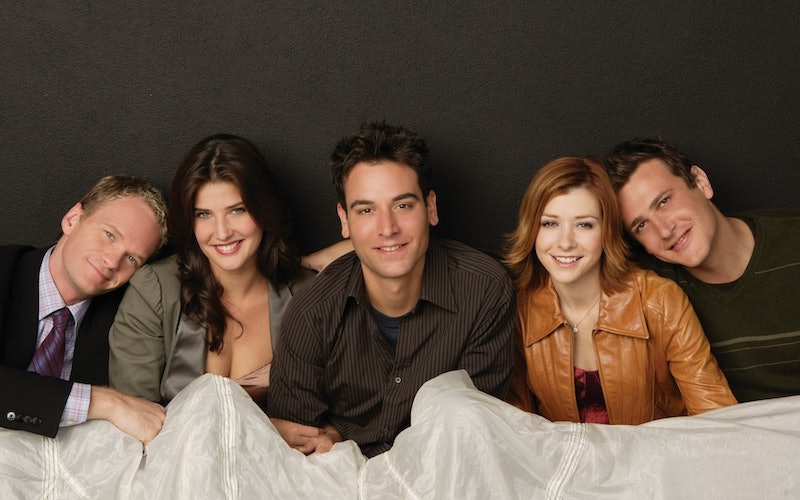 Let's face it — for the past few years, you've stuck with How I Met Your Mother not because you loved the show it had become, but for one of a few other reasons. Devotion to a show that, at its peak, you relished with an enthusiasm once reserved for Friends. Anticipation of the finish line just over there now, another season or... couple of seasons. It's close! Hope that, like you've seen in other comedies and shows that recovered creatively in their final season (see: Scrubs), HIMYM would rediscover its old mojo and deliver a rousing, feelings-inducing last stretch of episodes.

Whatever your reason, you are definitely still clinging to them three weeks into Season 9!

Not that "The Broken Code" was bad in the vein of, say, some episodes in the middle stretch of Season 8. But when your A-story amounts to Barney being mad at Ted until he's not mad at him anymore and Marshall weighing in on the conflict via Skype... it's not unfair to claim you may just possibly be spinning wheels.

Anyone else feel trapped by the Farhampton narrative constraint? There are at least 18 episodes to go until Ted presumably meets the Mother (DON'T YOU DARE, SEASON 10); that I'm already sick of this wedding frame doesn't inspire confidence in what's to come. More wedding squabbles! Jokes about the elderly! Marshall stuck on an entirely different show with Sherri Shepherd! Carter Bays and Craig Thomas spoke at Comic-Con of how they would turn the hyper-slowed timeline of this season into unique storytelling fuel, but so far the Farhampton Inn feels like exactly the burden we could have predicted. Are you loving it? You may be drinking as much as Lily.

"For the sake of recapping, what happened?" you ask. Well:

Lily's concerned that when she moves to Italy, Robin won't have any female friends. At all. So in an effort to prepare her friend for that future, she encourages Robin to try and make nice with various women around the hotel bar. After several foot-in-mouth interactions, Robin finally meets a hockey-obsessed woman who seems just as crazy as she is. Will we ever see her again? Doubtful!

Marshall spends the episode peering out of an iPad that's been affixed to a giant body pillow of Lily's creation. Lily calls the thing "Marshpillow 2.0," which of course implies a Marshpillow 1.0. The whole thing's bizarre. Is Jason Segel off filming a movie?

Turns out Barney saw Ted and Robin weirdly holding hands that one day in the park, and it's not not a point of contention. In fact, it may even be a violation of the — wait for it — BRO CODE. Ted reminding Barney of the many, many times he's broken his own code doesn't get him off the hook. Nor does admitting he still has feelings for Robin, which — UH OH. But don't worry! Following a quick and breezy confab on the beach, everything is cool once more.

Promos suggested that next week Frances Conroy will take off her shirt and Billy Zabka may return for some reason. Keep your eyes peeled for wild Mother sightings!