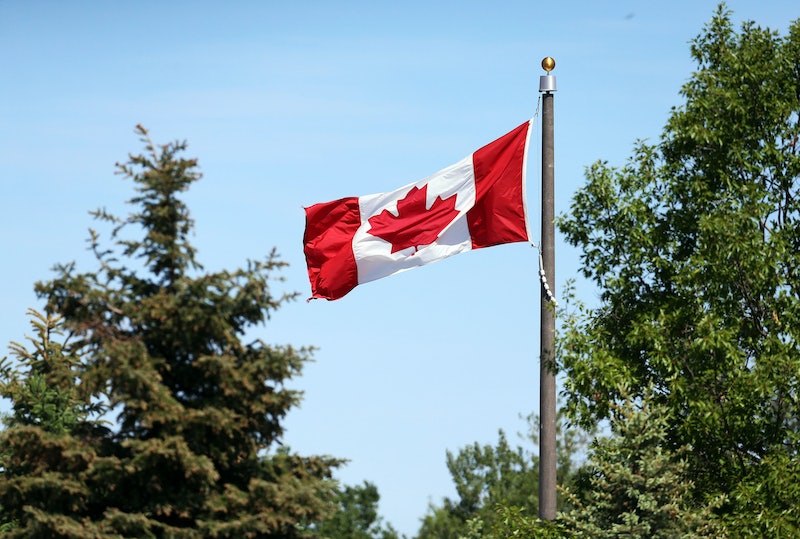 My Canadian childhood featured zero igloos and only three polar bears (all of whom lived in a zoo). Most of my early years were occupied not with snowshoeing or ice fishing but with reading. Most of my favorite novels were the ones from my homeland — books that sometimes get a bad rap when I try to force them on my American friends. For instance, nobody ever believes me when I discuss my childhood obsession with a book series about badass adolescent bats. A friend once interrupted me to clarify: “You said cats, right? Not bats?” Because cats are much more normal subjects of action-packed adventure series, apparently.

Typically my friends’ disbelief dissolves into good-natured cracks at Canadian literature. “Well,” they’ll say, “that’s Canada for you.” Which isn’t fair! The Canadian book scene is a dazzling wonderland of boys trapped in boats with tigers, steampunk sci-fi, and the abused concubines of the near future. Guest stars include forests, oceans, prairies, mountains, lakes, and loneliness.

Real talk: Canadian history certainly has its share of conflict and inequality, but Canada, fundamentally, is a nation that accepts and honors diverse cultural identities. These same values have spilled over into and defined our literature. Canadian fiction is rife with genre bending, riddled with urban fantasy and magical realism, and ripe with universal themes discussed in jarringly strange contexts.

What I'm saying here is that Canadian literature is often super-weird — but it's also super-great, and it says a lot of important things in a lot of interesting ways. Margaret Atwood isn't the only groundbreaking Canadian author with big ideas, and it's high time for the rest of the world to celebrate these gems in Canada's literary scene.

Brown Girl in the Ring by Nalo Hopkinson

Bizarre because: In a post-apocalyptic near-future, Toronto has been reduced to a drug-ravaged slum ruled by criminal masterminds. Part horror, part magical realism, part urban fantasy, the novel revolves around a search for a new heart for the Premier of Ontario. This quest eventually involves a series of possessions, spirits, and grisly murders.

Do Canadians seriously read this? Yes. Brown Girl in the Ring was critically acclaimed, particularly for its feminist interpretations of Afro-Caribbean culture. It won multiple awards.

Bizarre because: A pair of poorly-supervised brothers discover Canada’s ultra top secret spy-training camp (“Camp X,” obviously) during World War II. The young boys are subsequently captured, interrogated, threatened, tortured, and generally ill-treated by a variety of adults, none of whom seem interested in conforming to the Canadian stereotypes of friendliness and kindness.

Do Canadians seriously read this? Yes. Camp X won the 2003 Silver Birch Award, meaning thousands of Ontario schoolchildren decided that this was the best Canadian YA book of that year.

Bizarre because: This is the first entry in a series — four entire books! — about the aforementioned bats. Bats. Shenanigans that our bat protagonists get up to include: discovering the evolutionary origins of bats; learning how to control fire; accidentally killing a best friend; frolicking around the bat underworld; befriending cannibal bats; casually haunting beloved family members after death.

Do Canadians seriously read this? Yes. This book is assigned reading in many elementary schools.

The Book of Dreams by O. R. Melling

Bizarre because: A half-human girl with weird magical powers “quests” around Canada, talking to trees, ancient spirits, giant turtles, and other assorted magical creatures both benign and evil. Subplots include falling in love with a French-Canadian werewolf and making lots of symbolically important fashion choices. Actually, if this had been published a decade later in the era of Once Upon A Time and Maleficent, it could’ve been an international hit.

Do Canadians seriously read this? Yes. Well, probably. I recall this frequently being absent from the library whenever I wanted to check it out, which was all the time between ages 12 and 14.

Bizarre because: Teenagers gallivant around the world in zeppelins, in an alternate world where airships were never blacklisted because of silly things like the Hindenberg disaster. Features a classic rich-girl-poor-boy romance, pirates, flying cats (sorry, “cloud cats”), and barnacles from space. Sidenote: Kenneth Oppel is the superstar of Canadian YA lit.

Do Canadians seriously read these? Yes. Airborn won a Governor General's Award for children's literature — Canada’s most prestigious award for YA fiction.

Fruit: A Novel About a Boy and His Nipples by Brian Francis

Bizarre because: Peter is 13, overweight, and has talking nipples.Talking nipples! Peter regularly escapes to “The Bedtime Movies,” a fantasy world where the chatterboxes — sorry, chatternips — dole out harsh advice and threaten to expose Peter’s secret sexual desires. At least in his fantasy world he’s also thin and beloved — or, more specifically, Mel Brooks in a pink dress.

Do Canadians seriously read this? Yes. Fruit received critical acclaim. Nearly a decade after its publication, it was smugly included in Amazon’s list of “100 Canadian Books To Read In A Lifetime.”

Bizarre because: Within the space of 300 pages, the preteen protagonist is by turns (and sometimes simultaneously) homeless, addicted to heroin, prostituted, physically and verbally abused, and incarcerated. Not for the faint of heart.

Do Canadians seriously read this? Yes. This won a heap of prestigious awards, including the 2007 edition of Canada Reads (sort of a literary version of Battle of the Bands).

Who Is Frances Rain? by Margaret Buffie

Bizarre because: Antique spectacles allow a young girl to see ghosts. A typical YA plot line — new step-parent, forced to spend summer with grandmother, tasty boy next door — is buoyed by abandoned cabins, mystery, dead companions, eerie forests, and those creepy glasses. And the Manitoba prairie.

Do Canadians seriously read this? Yes. This won a slew of awards, and is considered a classic of Canadian YA literature. Who Is Frances Rain? was also a primary factor in my childhood desire for glasses, which I fervidly hoped would be magical.

Come, Thou Tortoise by Jessica Grant

Bizarre because: Several chapters are narrated by Winnifred, a centuries-old tortoise with a soft spot for Shakespeare. When the story isn’t relaying Winnifred’s peculiar internal monologue, we’re with Aubrey, Winnifred’s owner, who travels home to visit her father after he’s hospitalized by a Christmas tree. The book is “a novel of love and lettuce,” according to its own synopsis.

Do Canadians seriously read this? Yes. Come, Thou Tortoise is a popular book club pick, especially in Newfoundland, where it won a best book of the year award.

Bizarre because: Think Flowers in the Attic, but more cerebral and infinitely creepier. The novel follows a brother and sister who are raised in total isolation by their authoritarian father — until he commits suicide, leaving them to fend for themselves. They’re cripplingly unprepared for navigating society: the siblings speak a hodgepodge language gleaned from various ancient texts, and their limited worldview is dictated by superstition. As for the exact nature of their relationship....

Do Canadians seriously read this? Yes — it was a bestseller and critical darling in Quebec, and immediately translated into 10 languages, including English.