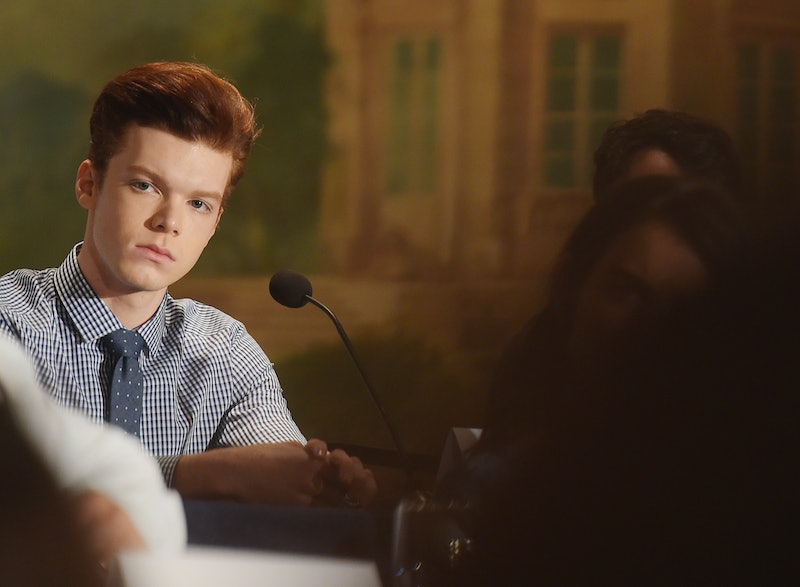 Gotham has never been an especially clever show, it just thinks it is. This is never more apparent than in how the show treats the iconic villains it's adapting from Batman's long and varied comic book history. You'd think that Gotham would be done introducing anymore major villains and finally develop the ones they already have. Instead, it's introducing the most iconic Batman villain of all. That's right, the Joker has been teased as coming to Gotham in the Feb. 16 episode, "The Blind Fortune Teller," but for the time being we'll know him as the troubled teenager Jerome, played by Shameless' Cameron Monaghan. If you're surprised by this possible appearance of the Joker so early, you're not the only one. It wasn't too long ago that the showrunners said Joker wouldn't be in Season 1 of Gotham, then changed their tune in an interview with TV Guide to say we'd see him by the end of the season, but just a small peek. Now it looks like we're getting even more than that. But could this just be a misdirect or are we really meeting the Joker on Gotham?

When asked by TV Guide if Monaghan is really playing the Joker as it is heavily hinted in the promo for the upcoming episode, Gotham showrunner Bruno Heller said, "We're not playing with the audience. I won't tell you that's the Joker, but I will tell you this is not a trick. This is not a game. This is the beginning of the Joker saga." Also telling is the fact that the Feb. 23 episode of Gotham is titled "Red Hood." Comic fans know that the Red Hood figures into the Joker origin penned by Alan Moore in the 1980s, The Killing Joke.

Coupled with the iconic laugh, framing of the promo, and other easter eggs that even casual Batman fans can pick up on, it seems pretty clear cut that we'll be introduced to the Joker on Gotham, in teenage form. But, the quote from Heller says otherwise. While everything seems to pointing to Jerome being the young Joker, I believe this is a fake-out and we'll find out someone close to Jerome is really the person we'll come to know as the psychotic criminal. Keep in mind, this isn't the first time Gotham has hinted at the Joker.

It seems like Gotham is trying to gain all the weight and importance of introducing the Joker without having the writing to back it up. How can the show introduce the Joker when it has trouble developing the parade of important villains it has already stuffed into its first season? When asked if he had any concern about overcrowding Gotham's already lengthy cast roster, showrunner Bruno Heller told TV Guidem "As much as the audience demands more and more, sometimes we've given them too much. I wouldn't deny that. But I would rather give people too much than too little."

If anything, Gotham gives us both too much and too little. Yes, Gotham is full of easter eggs, a bevy of villains, and multiple major plot threads. It feels like Gotham crammed five seasons worth of storylines into one. However at the same time, everything tends to fizzle out and lacks any sort of depth. Which is upsetting, because Gotham has the budget and the comic book history to really create something, at the very least, engaging. Will the Joker get to slowly develop like Oswald Cobblepot or will he be miswritten like every other character on the show?

One of the most powerful things about the Joker is the mystery behind the character, which is probably why no definitive history has ever been established. Unfortunately, Gotham is prone to overplaying and overexplaining even the very few storylines it handles well. So, if Monaghan does play this teenaged, proto-version of the Joker, I won't necessarily be looking forward to it.