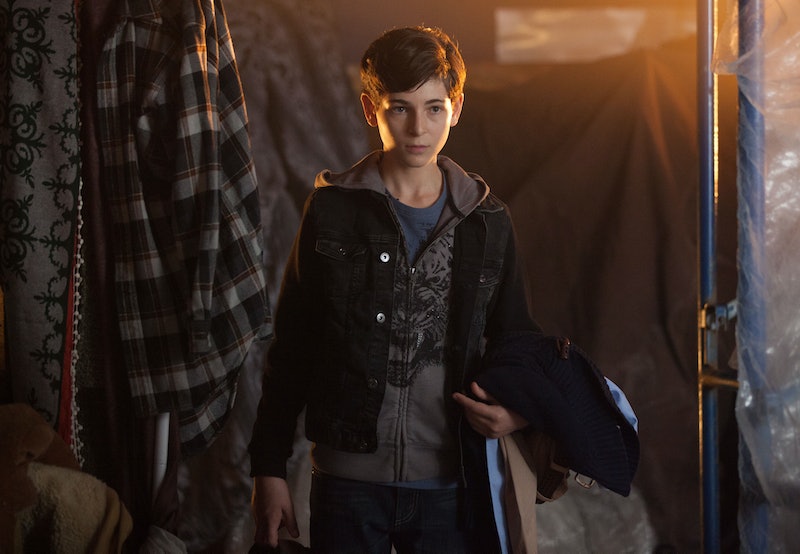 If you were expecting some impressive twists and turns from Monday's winter finale episode of Gotham, then you were probably as disappointed as I was. However, one particular portion of the episode stood out among the rest, if only because I've been obsessively looking for it since the Pilot. What am I talking about? The eternal question of who is going to become the Joker on Gotham, of course. It has been plaguing my mind since Gotham first started and the creators revealed that this was a mystery they were in no hurry to solve. At this point, anyone could be the Joker. Maybe Alfred Pennyworth is the Joker. We don't know! However, "LoveCraft" introduced us to a criminal fence named Clyde and I'm starting to think that maybe Clyde will become the Joker.

While enjoying their super fun alleyway adventures, trying to evade the professional killers chasing them down, Bruce Wayne and Selina Kyle visit a fence named Clyde in order to pawn some of Bruce's expensive items for a bit of cash. Clyde sells them out to the assassins, locking them upstairs until Ponytail Game (as I'm calling her) showed up with her crew to pick them up. Of course, Alfred, Harvey Bullock, and Jim Gordon all showed up as well for a semi-exciting shoot out, but that has nothing to do with why I think Clyde could be the Joker.

In the first place, there's no comic book information about Clyde. The only Clyde of any note in the DC universe is Clyde Mardon, a weather-controlling criminal who appeared on The Flash with a more fleshed-out (and evil) characterization than he received in the comics. That means Clyde the fence is a wholly original creation for the Gotham universe. In addition, when he saw Selina "Cat" Kyle and Bruce, one of the first things he did was start laughing as though their presence, and their items, were a funny joke that only he was getting. Finally, he immediately tries to get them both killed. All of those things scream the Joker to me. Especially that last part.

We don't know at this point if Clyde was a one-off character or if he'll be returning when Gotham comes back in January, but I think that the show has a lot of potential in this new criminal. He's a blank slate for them to play with, just like the Joker's backstory is a complete mystery even in the comics. The criminal clown tells a different story of how he got this way every time, so it will be interesting to see how Gotham could take Clyde from a fence to Batman's greatest, clownish foe. I mean, the Joker doesn't even have a real name in the comic book. How funny would it be if it turned out to be something like Clyde? I think he'd appreciate the humor.

Ultimately, Clyde has about as much chance as anyone else does of becoming the Joker. The entire point that Gotham is trying to make with this mystery is to point out that anyone, given the right circumstances, opportunities, and tragedies, could become the most dangerous man who ever lived. The winter finale might have been a bit of a letdown, but hopefully Gotham will use the rest of Season 1's run to raise the stakes and show exactly what went down in Gotham City to birth all of these costumed criminals and provide the need for someone like the Batman.