Mr. and Mrs. Alec Baldwin (Tina Fey and Baldwin) hit the stage of the SNL 40th Anniversary Special on Feb. 15 to deliver a hilarious and touching tribute to Tracy Morgan. Not only was Morgan a costar of 30 Rock with those two, he was also a cast member of Saturday Night Live, but unfortunately, Morgan could not make it to SNL 40. He is still recovering from a terrible car accident that occurred in June 2014. Fey and Chris Rock had been giving encouraging updates about the comedian, but it turned out that he wasn't up to appearing on the live anniversary show (understandably).

He might have been known on SNL for some time as "the other black guy," an annoying label he memorably mocked in a sketch, but he was a cast member for seven years — from 1996 to 2003. And over 10 years after he left the show, his fame has far surpassed that. Fey and Baldwin were the two most perfect people to honor the fact that Morgan couldn't make it to the show since Fey was on SNL and 30 Rock with him, and Baldwin has hosted SNL 16 times (16!). They were funny, but heartfelt and you could tell how much they really care for their friend (even with Baldwin's ridiculous — yet somewhat accurate — Morgan impression).

I had almost forgotten about "Brian Fellow's Safari Planet" (I know, I know — what is wrong with me?) and was so, so happy that SNL 40 showed a clip so I couldn't forget. 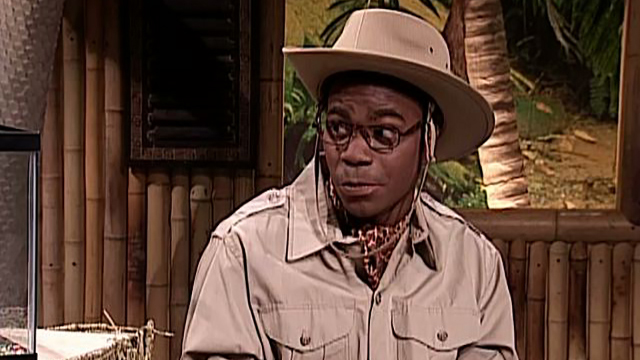 It was disappointing that Morgan couldn't make it to SNL 40, but his health comes first. And I'm just glad the show gave him a tribute.