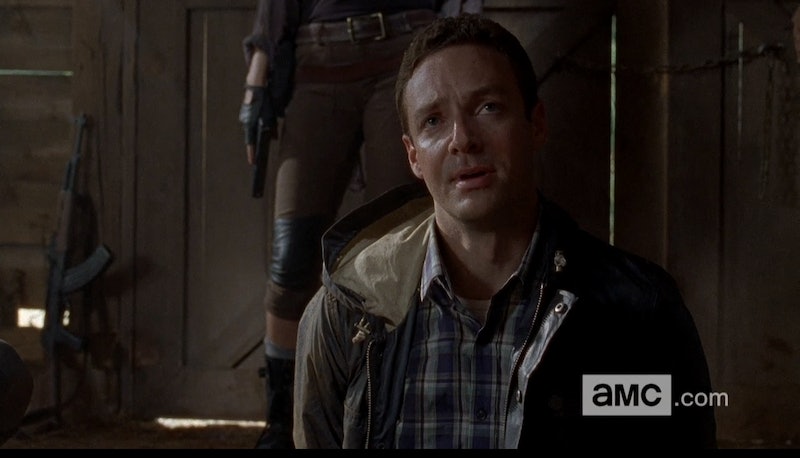 In the world of the The Walking Dead you can't trust anyone, but at the same time, you have to trust people if you want any hope of surviving. It's a lesson that the characters on TWD have been forced to grapple with over and over again, and now that newbie Aaron has been introduced they're all (rightly) a little skeptical. The Governor seemed pretty cool at first too, right? I mean, before we discovered he had his undead, flesh-eating daughter locked up, but WHATEVER. We all have flaws, guys. Still, it seems like Aaron (who is apparently a J.Crew model in his off-time? Peep that crisp plaid shirt tho) isn't a threat.

In a sneak preview of next week's episode "The Distance" on Talking Dead, we got to see what presumably picks up directly after Aaron crashed Maggie and Sasha's peaceful moment with a creepy music box at the end of "Them." They've invited him into their barn for tea and danishes and LOL JK they've tied him up. Rick is waving around the flare gun he found in Aaron's stuff and demanding to know exactly how deep of a squad he's rolling with, as one does. After Terminus, he clearly isn't taking any chances.

Despite the semi-harsh welcome, Aaron keeps himself calm, cool, and collected (exactly as I'd expect anyone wearing such a beautiful, clean shirt in the middle of a zombie apocalypse to do) during an interrogation with Rick, asking him "Does it matter?" when he's repeatedly questioned about the number of people he's with.

All signs seem to be pointing in the direction of "good guy" when it comes to Aaron, so hopefully he's the end of what's been an extremely long parade of Walking Dead villains. With group morale at an all-time low thanks to the deaths of Tyreese and Beth and their food and water supplies dwindling, the group doesn't really have any other choice but to trust Aaron. Fingers crossed their decision pays off.