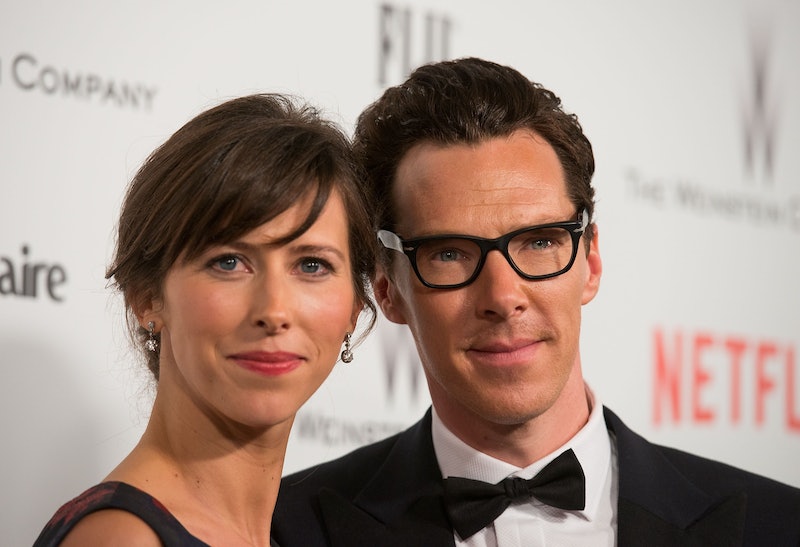 I'm sure you already know this and have spent the last 36 hours or so crying about it, but Benedict Cumberbatch got married this weekend, and on Valentine's Day, no less. And not to any of us, I'm sorry to say — to his fiancée and the future mother of his child, the theater director Sophie Hunter, whom he's been openly dating for a little under six months. I guess we could have seen that coming, but it still smarts. A fact that no one is more aware of than Cumberbatch's fans. They're traditionally a pretty logical and supportive lot, to their credit, but this has been quite the blow, and we're all staggering. Many members of the Cumber Collective took to Twitter to congratulate the couple and voice their support, but a few weren't so thrilled.

Most of the more negative tweets were about the fact that the two haven't been together that long, speculation that that Hunter had "trapped" Cumberbatch, and other neat little tidbits like that, but one fan spectacularly overreacted via Tumblr. I'll take you through some of the average complaints via Twitter, so you can see just how far this particular fan is out in left field. Come along with me!

This is from when the engagement was first announced, but it still holds true, and you can't go wrong with a Game of Thrones reference.

That's not the face of a happy person.

Just a reminder that Cumberbatch wasn't the only one worth obsessing over at his wedding — Tom Hiddleston was there too. *Swoon*

Congratulations, this was almost sweet, and then right at the last minute it got terrifying.

Even the fans who thought they look like siblings couldn't stay mad for long.

I think we're all right there with you.

Some took issue with his choice of best man. Because honestly, where was Martin Freeman?

I'm not kidding, you guys, this is about as negative as they get.

We're all entitled to our own opinions.

...unless your opinion is the one voiced by Tumblr user ivegonemanvegan, who posted the following horrifying message:

Benedict Cumberbatch married his "Oops! I got her pregnant…Or did I?" ex-escort fiance today. Or was that yesterday? Seeing as how there is a five hour time gap between the United States and the UK I'm not certain of what time of day it actually occurred. All I'm sure of is the date. February 14. Valentine's Day. What a disaster. This whole thing is a nightmare.

Oh good, I was worried you wouldn't get around to calling her a prostitute, but you managed it in the first sentence!

Guess what I did this morning? Very first thing upon getting out of bed, after reading the news that you had tied the knot with the succubus, I threw away all of your movies. and tomorrow I'm selling my magazine that has your pathetic face on the front of it. Then I'm selling all of the picture pendants I made with your face on them when I was head over heels in love with you last summer and this past fall. Am I in love with you anymore? No. Do I love you at all now? NOPE! I hate your guts and I'm celebrating your funeral.

The post has since been pulled, but WOW did that escalate quickly. Way to give the rest of the very rational fan base a very bad name.