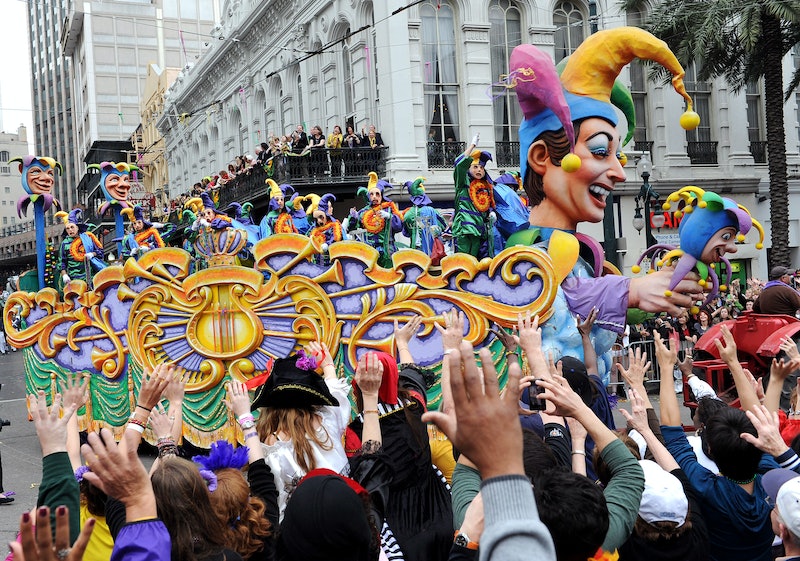 Mardi Gras season is officially in gear, and though we all know that New Orleans is the quintessential backdrop for all related Fat Tuesday festivities, not all of us will be able to find our way to the Big Easy in time for the celebration to begin. So where else can you go to celebrate Mardi Gras? To be honest — pretty much anywhere. Luckily, NOLA isn't your only option when it comes to celebrating this most debaucherous of holidays right. There are actually plenty of cities all over the United States that also participate in the Mardi Gras madness. From Mobile, Alabama to New York City, these cities offer the same amazing parties, traditional food, and fun parades you might find in New Orleans, giving you all the revelry of Bourbon Street — or as close to it as possible — without you having to be anywhere near it.

So what are you waiting for? Check out these eight cities outside of New Orleans that also kick it into party gear for Mardi Gras. Before you know it, you’ll be drinking, donning beads, and consuming more King Cake and moon pies than you can handle. And really, isn't that what this holiday is all about?

The first ever Mardi Gras celebration was held in 1703 in this city, where Fat Tuesday marks an official state holiday. Mobile's celebrations have historically revolved largely around mystic societies and private social organizations, with traditional parties like masquerade balls. Festivities begin early on in the month of February, with parades held in the days leading up to the 17th. On the day of, people from all over the country join in the party. According to the Alabama Tourism Department, Mobile Mardi Gras is the most-attended annual event in the state.

Mardi Gras also starts early in this city, with several big parades boasting nearly 200 elaborately decorated floats happening in the weeks leading up to the big event. On Fat Tuesday itself, revelers can find one final party at the Priscus Celebration, a Mardi Gras bash that has some of the best floats and live entertainment around.

Parties are held in locations all over the city, including some of NYC's most iconic venues. In the mood for some music? Head to the B.B. King Blues Club & Grill, where George Clinton will host a Mardi Gras celebration with his band. In Brooklyn, NYC Mardi Gras at the Irondale Center will be a celebration featuring gumbo, drink specials, and live entertainment.

One of the most popular Mardi Gras celebrations in the state of California, the San Diego Mardi Gras in the Gaslamp Quarter offers two parades, lots of wild costumes, and plenty of festive dance parties.

Dallas isn’t the only city in Texas that knows how to celebrate, though. In Galveston, partygoers celebrate with Island Mardi Gras, which begins February 6 and runs through the 17th. It features 22 parades, 30 concerts, and dozens of balcony parties.

Biloxi’s celebrations start in mid-January. On Fat Tuesday, residents continue a tradition begun more than 100 years ago with a morning parade by the Gulf Coast Carnival Association (GCCA), a procession that features more than 100 floats. There’s also an afternoon parade by the Krewe of Neptune for late night partygoers.

Mardi Gras Columbia, now in its fourth year, includes a parade, the all-day Animal Mission Party Animals Mardi Gras Festival, and the newly added Lagniappe 5K run earlier in the day. In addition to being festive, it’s also charitable. The festival is a family-friendly fundraiser for the Animal Mission of the Midlands, as is the race.

Soulard, St. Louis is home to one of the largest Mardi Gras celebrations outside of New Orleans. The festivities last for weeks, beginning with Twelfth Night in January and ending with Fat Tuesday on February 17. On the day of, the Light Up the Night Parade in downtown St. Louis includes processions featuring some of the top floats from the Grand Parade held earlier, and more parties with plenty of music, food, and of course, beads. Other Mardi Gras events throughout St. Louis include a wine tasting, Cajun cook-off, pet parade, and more.