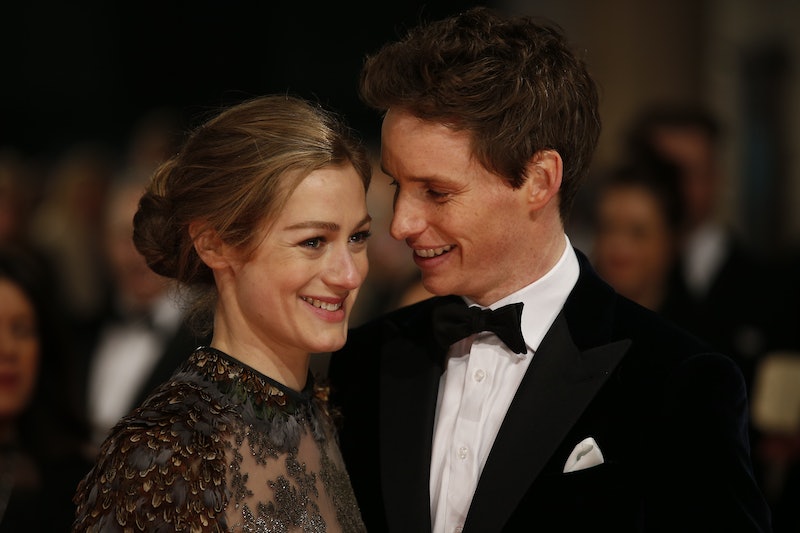 It would be hard to argue that Eddie Redmayne and Hannah Bagshawe aren't one of the cutest Hollywood couples ever — and their love story is just beginning. After dating for two years, Redmayne and Bagshawe tied the knot in December 2014, and they've been making me super jealous of their relationship ever since. They've had a lot of cute moments over the years, but nothing tops hearing Redmayne talk about Bagshawe. It's basically how anyone would want their significant other to speak about them when they aren't around, and it's really adorable to witness. Every time she comes up in conversation, an interview, or even when Redmayne won the Golden Globe for The Theory of Everything, it's crazy obvious how much he loves her. It was hard to narrow them down, but a roundup of Redmayne's cutest quotes about Bagshawe was absolutely necessary.

They may have started off as publicist and client, but it's clear that they work together much better in a romantic capacity. And after all, if they hadn't gotten together, I totally wouldn't have their relationship to freak out over. And if Redmayne wins at the Oscars this Sunday? Be prepared for even more quotes like these straight from his acceptance speech.

And Hannah, my wife of about a couple of weeks ago, we had to cut our honeymoon short to come to Los Angeles. I promise the sunshine wasn't so great today.

Talking about how she was late to their wedding

My wife — it sounds so amazing after you get married, even the term sounds new — she has never been on time for anything in her life. So one of my jobs was to find the venue. I made sure I found the place that we were having the reception was next to the chapel so that when she didn't turn up on time I could go and go 'Wait, are you coming?' No, she was a good half hour late ... everyone else was really stressed by it. I was really relaxed by it, knowing she'd never been on time a day in her life.

Is this the most understanding guy ever or what? That's love.

On planning the proposal

It's the most wonderful thing. I'm desperate. I'm chomping at the bit. I can't wait to be married!

How precious is that, though?

I don't know if any words were actually said. There was just a lot of sort of screaming across the phone. She was so happy. She does a proper job, and she was at home. And she was like, "How am I to go back and do the accounts when I'm so excited?!"

The person you marry should totally be the person you freak out about the great things in life with — even if she is your publicist.

How much he loves their married life

I suspect it will be even more wonderful if he wins the Oscar on Sunday.

My wife and I love Friends. We saw Jennifer Aniston at a party and we were just incredibly inappropriate. We so wanted to meet her that we sort of literally stalked about four meters behind her for an entire evening. Eventually I think she was like, "Okay!" So we got to meet her and she was as beautiful and wonderful as you'd expect her to be... She could've turned around and slapped us for being stalkers.

You know what they say: The couple who stalks Friends stars together stays together. Redmayne and Bagshawe are so obviously best friends, and it's the cutest.