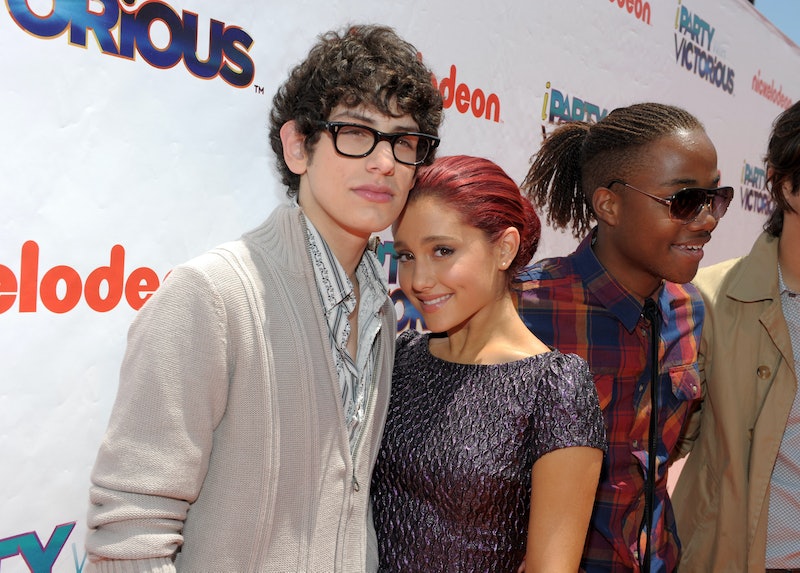 Ariana Grande's music video for "One Last Time" has finally dropped, and there's a lot going on. Essentially, the apocalypse is happening — some sort of astronomical disaster is hitting the earth, turning the sky gorgeous shades of pink and purple, and something about it inspires the video-version of Grande to get out of her boyfriend's car and find a place where she can enjoy the last few seconds of humankind. Despite the fact that random emergency workers are trying to get her to head for a safe place, Grande keeps moving until she reaches the top of a building, where her boyfriend meets her to embrace as (I'm guessing) the sky swallows them whole. We don't see her video boyfriend's face until the end, but when you do? He's probably somebody you recognize. That's because the guy in Grande's "One Last Time" video is Matt Bennett, another Nickelodeon alum — also known as Robbie in Victorious (and occasionally Sam & Cat).

Yep, Grande has enlisted her show's former bespectacled guest star to play her love interest in her latest sci-fi themed music video, and judging by the YouTube comments, it was a solid idea. Her fans are super excited to see his appearance, and for those of us who aren't quite as familiar with Bennett? My research tells me he's a pretty interesting dude.

He regularly does comedy shows

One of his more recent shows involved a skit about Tinder, which can't not be funny, right?

He was Helen's stepson in Bridesmaids

It was a tiny cameo role, but we can't deny it was one of the most subtly funny parts of the movie. This is not the best quality video, but let's not pretend you haven't already watched this movie 900 times and know exactly who I'm talking about.

He was also in the viral YouTube video, "The Slap"

You know, the one that mocked "The Kiss," where people were supposed to slap strangers they've never met? Keep an eye out for Bennett at 43 seconds. Priceless.

He Instagrams pictures of cats

Which automatically means he's my kind of guy. Instagram and cats? The perfect combination.

And he had a hand in writing songs from Victorious

Bennett isn't just talented in comedy (and slapping), he's also a songwriter. This is his handwritten copy of "I Think You're Swell." The more I find out about this guy, the more I like him.