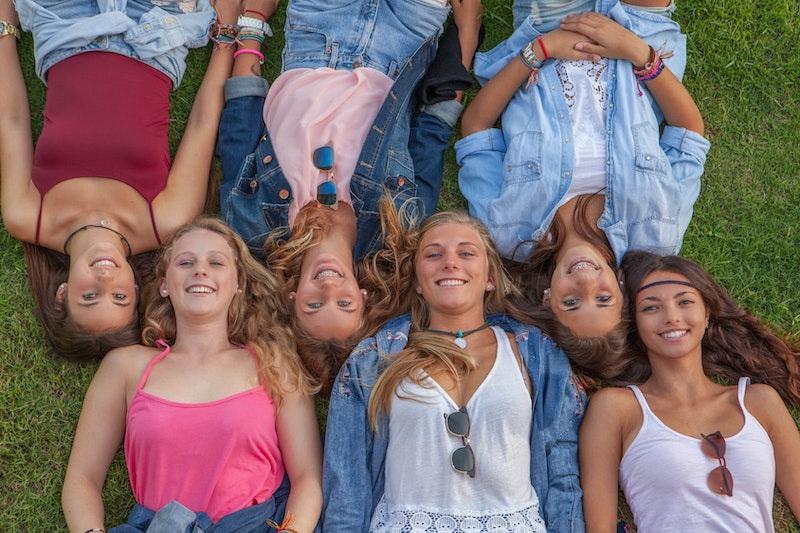 The next time you complain about how you’re not getting enough sleep, stop and think about how much sleep you didn’t get as a teenager. With all those 8 a.m. classes, it’s amazing anyone was able to make it through fifth period without smashing their head on the desk in utter exhaustion. And kids today are getting even less sleep than you did when you did: A new study has found that teenagers are sleeping two hours less than they should.

The recommended amount of time that teens should sleep is nine to 10 hours a night, but the study found that more than half the kids between 15 and 19 weren’t even getting seven hours a sleep. That percentage has decreased from 1991, when a little bit more than half of teenagers were getting the adequate amount of sleep every night.

The reason why teenagers are getting less sleep these days than generations before them? Technology, of course. Teens today have even more technology and technological gadgets in their grasp than kids did in high school even 10 years ago. (Think about it this way: Facebook is only 11 years old.) Who has time to sleep when you have Facebook stalking and homework to finish?

But sleep isn’t the only thing different for teenagers today. Here are nine other changes between this generation of teens and the ones before them. Some things will give you hope for kids these days, while others... not so much.

1. They Are Less Likely To Be Sexually Assaulted

Let's start with some surprising good news: sexual assault against 12 to 17-year-olds has decreased by more than half since the mid-1990s. A 2013 report on sexual violence against women over the age of 12 found that although the number of attempts of rape and sexual assault remain unchanged, between 1995 and 2010, the number of victims dropped from 556,000 to 270,000.

2. They Are More Likely To Be Bullied

A 2009 national survey found that in 2001, 14 percent of high school and middle school kids reported some form of bullying, but in 2009, that percentage went up to 32. The reasons for the increase in bullying cases is due, in part, to the rise of cyberbullying of course — 42 percent of teens have been threatened online.

3. They Are Less Likely To Commit Suicide

While that may seem surprising because of campaigns like It Gets Better, the fact remains that suicide is still the second leading cause of death amongst teens. (The first cause is unintentional injuries.)

4. They Are Waiting Longer To Have Sex

5. Teen Pregnancy Is At A Record Low

A 2013 study by Office of Adolescent Health found that teen pregnancy rates are at an all time low. Between 1990 and 2010, the teen pregnancy rate in the U.S. dropped by 51 percent. Not only because teens are waiting longer to do the deed, but when they do finally are doing it, more of them are using contraception.

6. They Are Just As Likely To Use Drugs

7. They Are In Worse Shape

Cardiorespiratory fitness is measured by how well the respiratory and circulatory systems work together during physical activity to provide the necessary support for the body. From 1999 to 2012, the number of teens with that adequate level has dropped from 52.4 percent to 42.2 percent.

8. They Are Actually Less Likely To Binge Drink

You surprised? According to Monitoring the Future, a national survey of teens and alcohol use, binge drinking amongst 12th graders is actually lower than it’s been since 1976, and the amount of teenagers who have been drunk in the past year is also as low as it has ever been.

While binge drinking still remains a trend among teenagers, a 2013 study by JAMA Pediatrics found that binge drinking (five or more drinks in one sitting) peaked in the 1970s and early 80s, and has been on decline since 2005.

9. They Consume More Media Than Anyone

According to The Washington Post, teenagers spend 7.5 hours a day consuming some sort of media, and the amount of time kids are on their phones went from 20 minutes in 1999 to an hour in 2013. Studies by the Pew Research Center found that more than three-quarters of teens have cellphones, and that’s up from the 45 percent who had them in 2004. In just the past five years, the average amount of texts a teenager sends has jumped from 50 to 60 a day. (The average adult sends 40.)