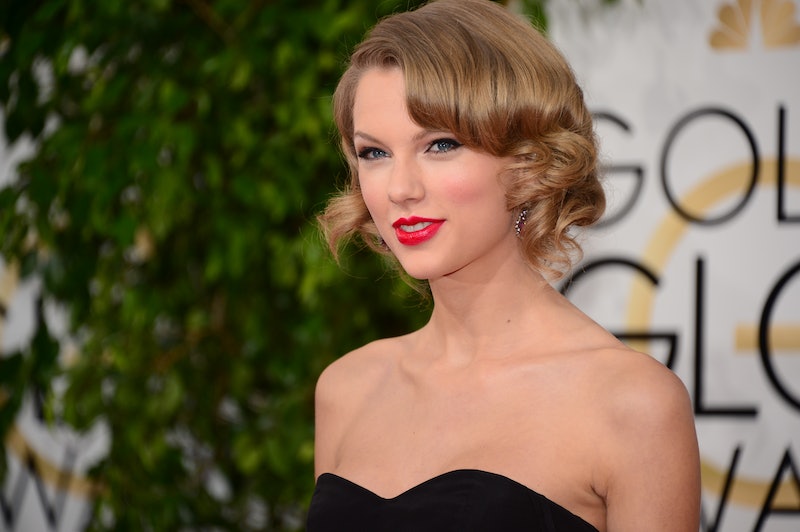 If you were busy this past weekend weeping about the fact that Benedict Cumberbatch is officially off the market forever and ever, you may have missed another crucial piece of celebrity marital news — Taylor Swift was asked to be the maid of honor at her friend's wedding. Gasp! That's right everyone, in the very near future, we will all live in a world in which Taylor Swift is in charge of a wedding, if you can imagine.

And yes, I'm fully aware that that's not traditionally one of the MOH duties, being in charge of the entire ceremony, but we're gonna have to change customs around a little bit, because this is the role Swift was born to play. Cancel the wedding planner, cancel the DJ, cancel the photographer, cancel the whole wedding party, because we don't need them. Swift can handle this one hundo percent on her own, possibly even down to baking the cake and creating the party favors. Maybe not the dress, but who knows, she's a medical marvel.

The bride at said wedding will be Swift's best friend from childhood, Brittany Maack, who asked Swift to be her Maid Of Honor with a monogrammed piece of stationery.

Swift then posted that image to Instagram with the caption YEAH I WILL, and the rest is history. The rest of us are left to ponder just exactly how awesome it would be to get married with her as your maid of honor. Because think about it!

You'd Get All The Presents

For proof, look no further than that time she went to her fan's bridal shower and brought pretty much the entire contents of a Williams-Sonoma along with her.

When she hasn't had a recent relationship of her own to write about, Swift has been known to take inspiration from the couplings of her friends, like when she wrote 'You Are In Love' about her friends Lena Dunham and Jack Antonoff. You could be next, bride-to-be!

She Can Get You A Designer Wedding Dress

You're Gonna Have A Heckuva Hashtag

With the entire force of the Swifties all tweeting and Instagramming congratulations at you, your wedding hashtag just might break the internet.

What A Kick-Ass Bachelorette Party

With the women Swift hangs out with on a regular basis, your last night out as a single woman would be all but an A-List event. Oh, and your friends could come too.

WHAT COULD BE BETTER.