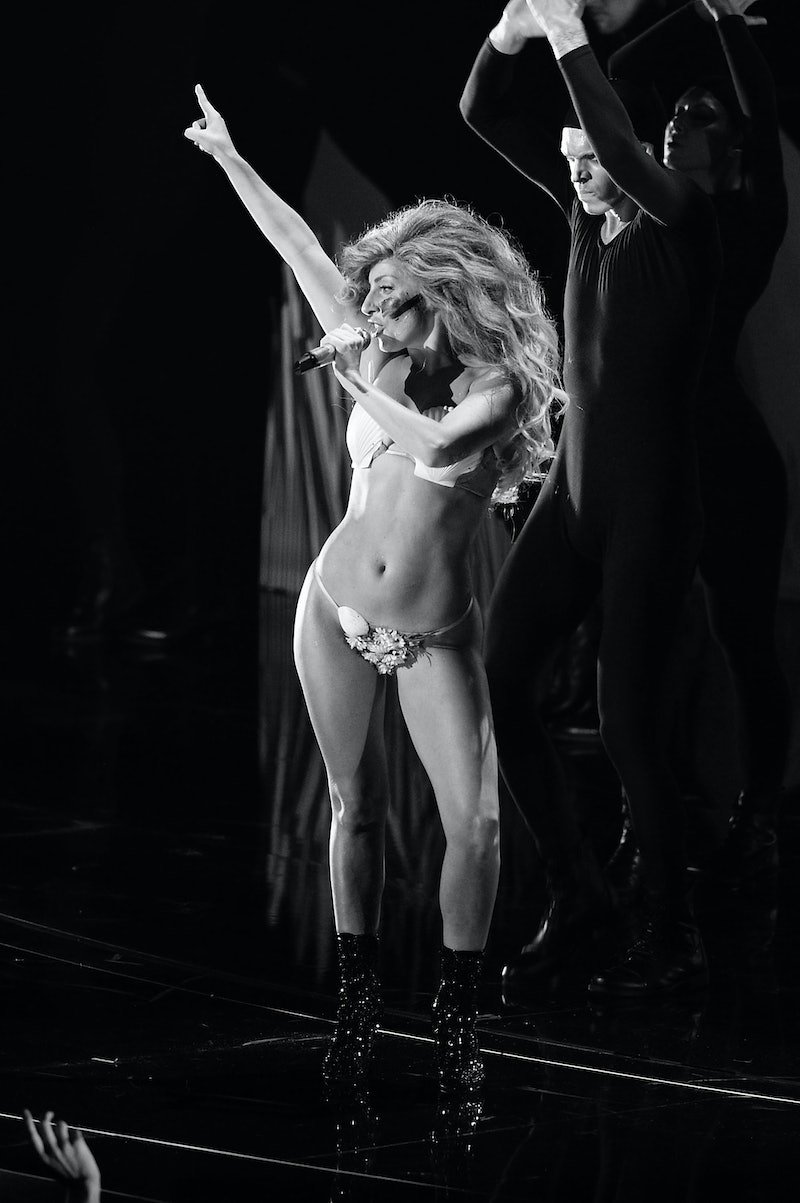 These days, it's hard to shocked by scantily clad or entirely nude female pop stars. Miley, Rihanna, Katy: We've probably seen more of of their flesh than we have our own, and we're now almost entirely desensitized to nudity, for better or for worse.

But lately, Lady Gaga has also hitched her wagon to a naked star. From her VMA performance, to her tweet last night that shared the cover for her upcoming album Art Pop, everything Gaga has done lately has involved Botticelli and herself in the nude. And given her past, at first glance, this choice feels different and disappointing.

Gaga has always been famous for pushing sartorial boundaries, for doing things no one else is doing. She has always claimed to live and breathe pop culture and has asserted she will change the world with her individuality "one sequin at a time." For Gaga, nudity seems a tired, boring, and confusing choice. Given her past, though, it's safe to assume that by shedding her wild appearance and improbable outfits, Gaga is making some kind of statement. So what is it?

In the past, Lady Gaga has repeatedly preached a belief in the connection between fashion and music.

"I think that fashion and music go hand-in-hand, and they always should. It's the artist's job to create imagery that matches the music... I think they're very intertwined."

This quote from 2009 gives a hint as to why Gaga has been so naked lately: though it's not fashion, what Gaga has been up to is certainly "imagery." And it's clearly connected to her upcoming album.

Perhaps this seems obvious. In her most recent song, "Applause," she portrays herself as a slave to fame. She would do anything to stay famous, to keep her fans (she'd even make the song sound like all her other songs!). By doing this she exposes her vulnerability to her fans, by admitting her need for their love and by, well, exposing her body.

Yet, it's also fathomable that the song isn't meant to be merely personal. Given how exposed stars are today, (#socialmedia) and how sexual most young pop stars make themselves, perhaps Gaga's song somehow speaks for all modern musicians. And perhaps her naked public image isn't a fashion cop out, but a statement that "I will be just as naked as all the other pop stars, but I am going to do it like a goddess." Hence the constant Birth of Venus imagery on her album cover and in her hair accessories. By making this statement, she is making it clear that unlike Miley, whose sexuality is awkward and seemingly inauthentic, Gaga is in charge of her body, her sexuality, and her career.