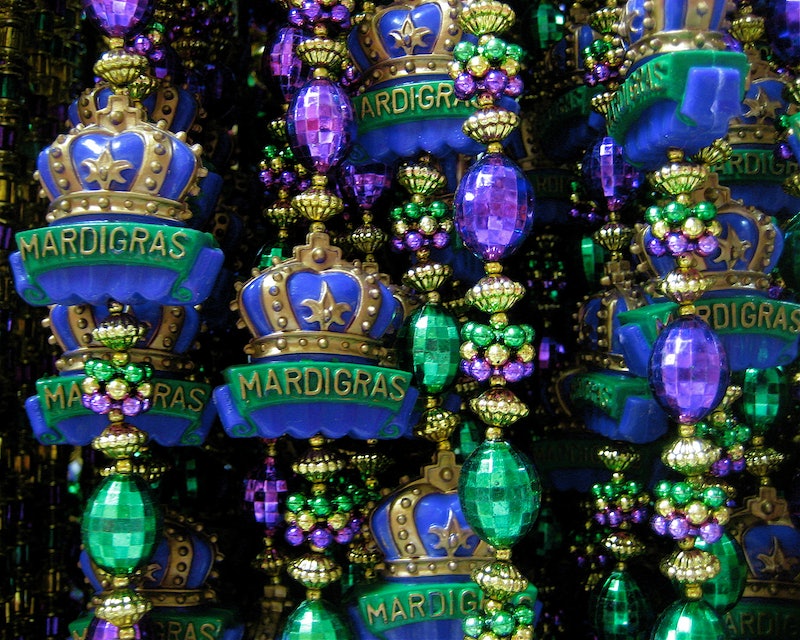 Now that the Valentine's Day candy and cards have been cleared from the stores, it’s time to celebrate another over-the-top holiday — Mardi Gras. Yes, while Northerners will be awaiting another snowstorm on February 17, citizens of New Orleans will be dancing through the city's cobblestone streets. Jealous? We bet!

Over the years, the celebration has become synonymous with booze, beads, and boobs, but there is much more to the holiday than what meets the eye. Mardi Gras, also knows as "Fat Tuesday," began in 1875 as a kick-off to the Lent season. On this day, Christians would eat, drink, and be merry before embarking on 40 days of penance. Though this still holds true in most parts of the world, those without any religious obligations see it as a day to indulge in some sinful behaviors, from drinking all day to eating one too many slices of King's Cake.

But with Mardi Gras being on a Tuesday, many of us are stuck in an office and unable to partake in any debaucherous activities. Or are we? Just because you can't go to work wasted or with a marching band in tow doesn't mean you should miss out on the Mardi Gras festivities. From food to fun activities, here are some PG ways to celebrate Mardi Gras from your cubicle.

1. Start the morning with a slice of King Cake

It's not the most nutritious breakfast, but calories don't count on holidays, right? What started as a simple European dessert has turned into a traditional treat. Depending on where you live, finding King Cake at the last minute may prove to be a difficult task, so you're better off baking one yourself. And though it's tempting to shove the sweet pastry into your mouth, make sure to check for a plastic baby. If you find the little one lying in your slice, then you are the King or Queen of Mardi Gras (at least, among your group of friends).

2. Incorporate the holiday's hues into your outfit

The Mardi Gras palette is sure to brighten up your usual office uniform. Not only do the colors compliment each other nicely, but they are symbolic. Purple represents justice, green represents faith, and gold represents power. Those are some pretty good traits to bring to work, don’t you think?

3. Hang a mask by your desk

Bring a festive touch to your work space by hanging a Mardi Gras mask. Though its original purpose was to hide Krewe members' identities, the detailed accessory has become a holiday staple for everyone involved. Not to mention it's a great way to cover any dark circles or unwelcome zits.

4. Pass out some beads

Believe it or not, these beads were never meant for bare-breasted women. When the ritual first began, the necklaces were supposed to be tossed to those who exhibited the meaning of the Mardi Gras colors. Bring the tradition back by handing beads to your co-workers who exemplify justice, faith, and power. Just make sure to explain the back story when gifting them with their jewelry, or you may be called down to HR.

5. Enjoy some gumbo for lunch

Nothing says welcome to New Orleans like a big bowl of gumbo. Made using meats and seafoods, this dish is said to symbolize the mix of cultures that exist in southern Louisiana; mainly French, Spanish, and African. It may be hard to find the stew in stores, but the Kitchn has an easy-to-make recipe that will feed you beyond the festival.

6. Listen to some smooth jazz

New Orleans is known for two things: Mardi Gras and jazz. Much like its food, the city's music is a culmination of its many cultures. This specific genre incorporates brass band marches, ragtime, and blues. Free from distracting lyrics, these tunes will keep you productive during a distracting day.

7. End the day with some bourbon

OK, we’ll be honest, there is no real connection between this beverage and Mardi Gras. But since Bourbon Street hosts the festivities every year, why not honor it by taking a shot?

More like this
The 8 Best Chew Bones For Puppies, According To A Vet
By Andrea Hannah
I Tried The $20 TikTok Viral Oishii Strawberries — Here's What I Thought
By Sophie Hanson
Trust Me, Pickle Martinis Are The New It Drink Of The Season
By Emma Carey
The 4 Best Blenders For Acai Bowls
By Ileana Morales Valentine
Get Even More From Bustle — Sign Up For The Newsletter