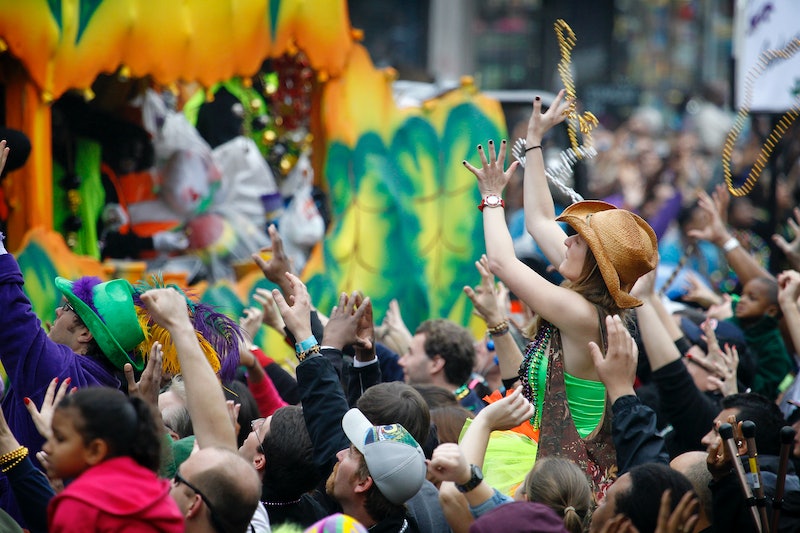 French for the holiday known as Fat Tuesday, Mardi Gras is that special day for Christians to get all that "naughty" behavior out of their system before they head to church the very next day — likely hungover as hell — to mark Lent with Ash Wednesday. For those who observe Lent, Mardi Gras is a healthy way to exorcise to the devil inside. And one of the most infamous devilish traditions? Flashing for beads on Bourbon Street. But when — and how exactly — did that supposed tradition begin?

Although the celebration of Mardi Gras dates back to ancient Rome — and we all know how those people partied — it’s still relatively new to the United States. It wasn’t until 1875 that Mardi Gras became a legal holiday in Louisiana, though there is evidence of it being celebrated as far back as 1699, when French explorers named a bank on a river where New Orleans is today Point du Mardi Gras. (If they only knew what was to come.)

Even if your knowledge of Mardi Gras is limited, there are probably some key traditions of which you’re aware. Of course, there are the floats, masks, and the Zulu coconuts which, if you score one at Mardi Gras, is pretty much like being handed a pound of hydrating gold.

Probably the most well-known of the traditions is the throwing of beads from floats. As the International Business Times explains:

The tradition of bead throwing starts with their original colors. The color of the beads was determined by the king of the first daytime Carnival in 1872. He wanted the colors to be royal colors – purple for justice, gold for power and green for faith. The idea was to toss the color to the person who exhibited the color’s meaning.

Beads are a good time and can really spruce up an outfit. Sadly, the beads that are thrown these days aren’t the glamorous glass strands that were thrown until the 1960s.

Apparently, what with the massive amount of alcohol being consumed at Mardi Gras, glass was a dangerous material to have thrown by inebriated folks at inebriated crowds.

So how does one get their hands on today's cheap green, gold, and purple beads?

You 'earn' them with you BOOBS, duh. That’s right; show 'em your knockers, ladies, and voila! Just like real life, your breasts solve every problem you might have.

If you think women flashing their breasts during Mardi Gras is a relatively new phenomenon, then you are mistaken. The act — and I use the word "act" here because any longtime NOLA resident will tell you, this is NOT a long-held tradition — may actually date back to 1889.

At least, it was in that year when local paper the Times-Democrat observed and documented the "degree of immodesty exhibited by nearly all female masqueraders seen on the streets." Perhaps they were just getting smashed.

What we know for sure is that the practice of flashing for beads didn’t really become a staple until the 1970's (Women’s Lib, y’all!). The practice also saw a major increase in the '80s and '90s (backlash to Women's Lib, y'all!). By 1999, the practice was so enshrined that we saw classic films like Girls Gone Wild: Mardi Gras Madness.

While there's nothing inherently wrong with flashing your boobs if that's your jam, there have been some consequences to the tradition: Women trying to enjoy Mardi Gras sans-flashing have to deal with the creepy drunk guys who now have a "legit" reason to say "Show us your tits." As my friend Melanie who's lived in New Orleans for almost 10 years told me, "Mardi Gras in New Orleans after dark can be a scary place for a woman — especially if she's alone."

The thing to remember when it comes to celebrating Mardi Gras is that flashing for beads isn’t considered a tradition by the locals, so, obviously, you don’t have to feel pressured to do it. We feel sad to need to clarify that, but...

And what about guys who want to score some beads? Well, as one Yahoo commentator points out, they may find their inner diva SOL:

You can try to earn beads by dropping your pants down on Bourbon Street, but you will get arrested by the cops. They don't tolerate that type of behavior from men and unless you enjoy being locked up until Ash Wednesday, I'd advise against it. You can catch plenty of beads from the balconies just by asking (and it helps to not be wearing a ton of beads) or of course get them at the parades.

Right, then. All guys have to do is ask.