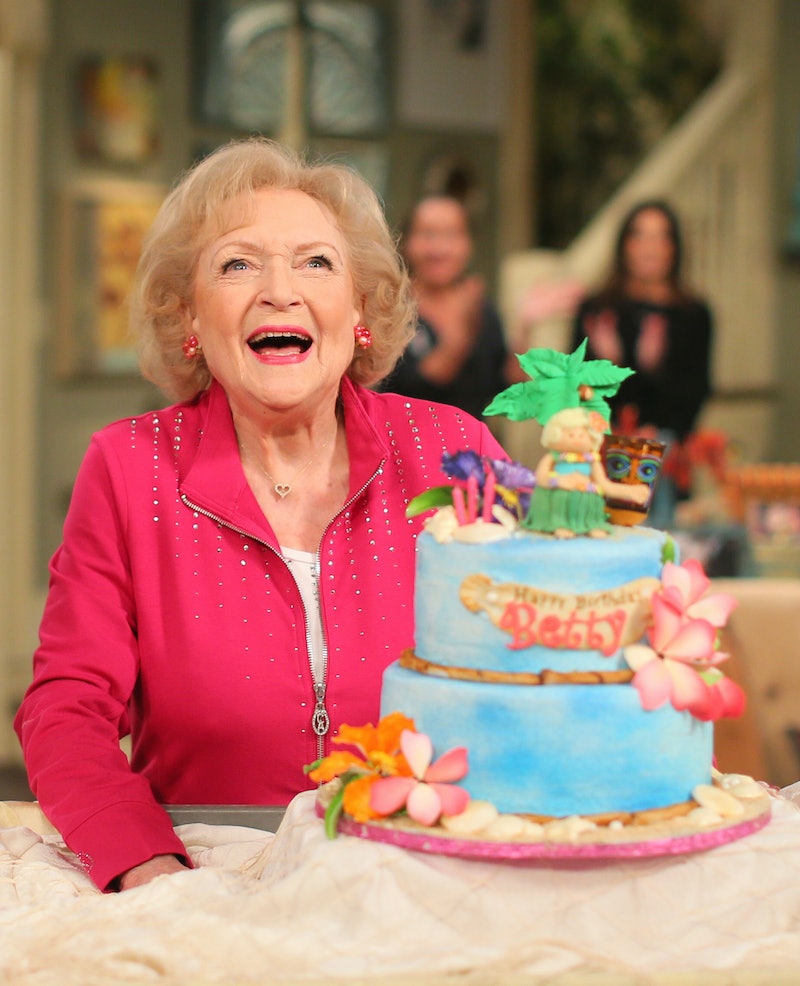 We can all agree that Betty White is a national treasure. The 93-year-old actress has had a long, incredible career from Golden Girls to Hot in Cleveland, and she constantly makes everyone around her laugh. Her most recent feat was making out with Bradley Cooper on SNL 40 , but that's not the first time we were jealous of her and wanted to be her all at once. She's down right delightful, whether she's singing and dancing for her friend Morgan Freeman, making hilarious Funny or Die videos where she rags on Ryan Reynolds, or delivering amazing zingers in bloopers from her many shows and movies. Basically, we should all aspire to be Betty White at this point, and I have eight reasons why that should be your new life goal.

To narrow it down, I had to cut out any acting from White. It was difficult to not include all of her one-liners as Sue Ann on The Mary Tyler Moore Show and Golden Girls' Rose, her rapping on Community, and her dancing around the fire scene from The Proposal, but there were plenty of real-life moments to make up for it. Start preparing now, because it's going to take a lot to make your life like White's by the time you're 93.

When she got a surprise flash mob for her 93rd birthday, she couldn't stop clapping and laughing with glee.

She Doesn't Hold Back With Sexual Comments

Game of Thrones' Jason Momoa understands this better than anyone.

She Hangs Out With Strippers

Thanks to Anderson Cooper.

She Makes Out With Hot Guys

I'd 'ship her and Bradley Cooper.

But She Also Makes Fun Of Them

It was for Funny or Die, but it's still amazing to see her rip Ryan Reynolds a new one.

She Always Has A Great Zinger Or One-Liner

"I'm allergic to sex," she told Craig Ferguson after sneezing on set.

But She Also Gives Great Advice

In this interview with Larry King, she defends the gay community and gives fantastic advice for young actors.

She Sings & Dances Better Than Any Of Us