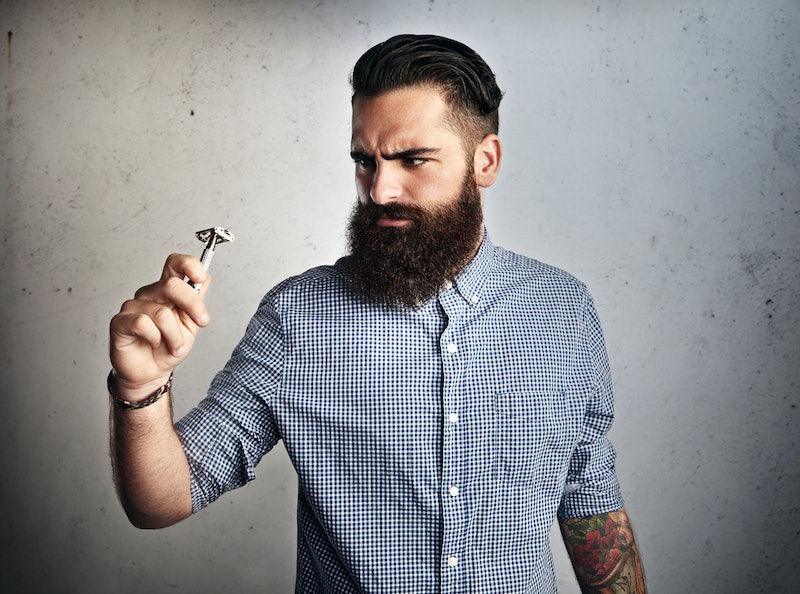 I've been plagued/blessed with having mostly guy friends, which may be attributed to the male-dominated hardcore scene I was a part of in my formative years. Sometime in college, I stopped relying on my guy friends for fashion advice — I traded in my uniform of denim jackets and band hoodies for cute rompers and hundreds of black dresses. Around the same time it became imperative that I also get my own grooming tips from elsewhere as well, because my guy friends were seriously lacking in that department. As time grew on, I was impressed to say that most of my guy pals seemed to slowly crawl out of the punk-rock hell-hole they called an apartment and began doing simple chores like cleaning their bathroom and doing their laundry. Of course, these are all things that every adult should know how to do. In my opinion, keeping a clean house is a staple of adulthood, but what is equally important is often ignored is keeping a clean bod. Seriously, there are some grooming habits that every adult male should have.

Don't get me wrong, there is something I find incredibly sexy about a rugged dude. I once dated a welder that smelled like metal all the time and constantly had grime on his hands after work — it was, like, super hot. The fact that he took the time to remove the grime, however, was just as sexy.

So, maybe those rough hands give you a slight flutter of the heart and maybe that scent of musk from a man that has been working with his hands all day makes you tingly all over, but let's be honest here: There are some things that a grown-ass man should be keeping up with.

Fellas! Now that you are an adult, it's time to take off those beanies and baseball hats and start conditioning your hair... unless you're into flaky scalps and premature balding. If you're fine with those two things, then please keep your hair soft so we can run our fingers through it. Numerous hair experts and sources at Livestrong state that how you treat your hair and scalp can directly attribute to baldness. Not that there aren't some seriously sexy bald guys out there...

Hey! Guess what? Just because you can't see inside your ears doesn't mean no one else can. If you have any reservations about sticking a tiny Q-tip in your ear, I'm right with you — I've definitely felt I was close to puncturing my ear drum while hastily swabbing my ears. Here's the good news: A wet washcloth with a little bit of tea tree oil or mild soap can do those waxy ears some justice, and keep everyone else from recoiling in horror when they catch a glimpse inside your ear.

Maybe I'm just saying this because systematic stereotypes tell ME that I have to keep a neatly, trimmed pubic area. Maybe I'm saying it because I've been down in the trenches too many times only to come up with hair in my mouth. Either way, trimming your pubic hair is much appreciated. In fact, I would go as far to say that it's an oral sex safety hazard if you don't. There are some important factors to trimming your male region though. For one thing, don't use the same trimmers for your genitals as you do for your face for like, pretty obvious sanitary reasons. However, unless your partner has requested it and you are completely on board, there is no need to completely shave your pubic hair off. It doesn't make your penis look bigger, I promise.

They are pretty far away from your hands, I know, and chances are, especially in the winter months, they aren't getting a lot of visibility. That's no excuse to completely ignore them! Regardless of the season, dry, cracked feet do not feel nice rubbing up against a person in bed. In fact, sources at Healing Feet claim that dry, cracked heels can lead to dangerous infections.

I'll be honest: I once passed on a date with a nice, successful man because his eyebrows were clearly waxed, weekly. I just wasn't comfortable dating someone that had the time and money to shape their eyebrows like that. On the flipside, tweezing the area between your brows can eliminate the dreaded unibrow. Just like most things in life, it's all about balance. You don't have to book weekly waxing appointments — unless that's how you treat yourself — but I'm down with giving the area over your nose a little TLC.

There is a fine line between rough, sexy hands and cracked, dry hands that are in desperate need of moisture. I give my utmost respect to any guy that can successfully walk this line. Unfortunately, being a chef or working with your hands can easily lead to splitting skin that is painful and unsexy. Even though it may seem sexy, the cruel reality is that no one wants jagged, sharp hands inside them (sorry...), so it's best to shape up and apply moisturizer to your hands on the regular. Keeping your nails a modest length and trimmed is also a good idea to avoid turning foreplay into a nightmare — that goes for you too, ladies!

I've had men at the bar that have smelled like they were literally dipped in Axe body spray for several hours. It's super hard to serve someone their drinks when your eyes are watering and you're gasping for a breath of non-cologned air. This goes for all genders, really: Don't go overboard on the colognes and perfumes. Simply washing daily and applying deodorant will control body odor, plus maybe a gentle dab of aroma on your pressure points to promote your natural sexy scent.