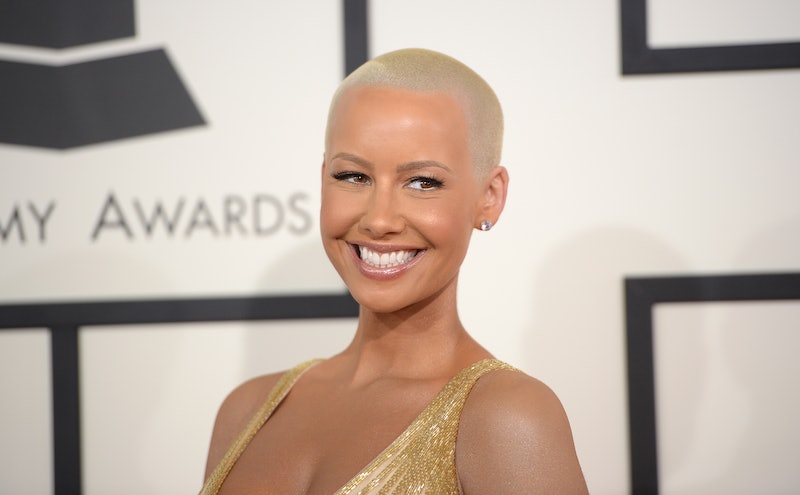 And the feud between Amber Rose and the entire Kardashian-Jenner clan rages on. If you haven't been keeping up with all of the kontroversy, here's what you missed: On Sunday, a radio interview was released in which Amber Rose disses her best friend Blac Chyna's ex Tyga for (allegedly) dating Kylie Jenner, calling the youngest Jenner a "baby" who needs to "relax." Kylie's big sister Khloe Kardashian immediately came to her defense on Twitter, citing an interview in which Rose said that she worked as a stripper at 15 and criticizing Rose — who also happens to be Khloe's brother-in-law Kanye West's ex — for calling out Kylie who actually has a reputable career at just 17. And things just got a whole lot worse, with Amber Rose calling Kim Kardashian a "whore."

In her latest Kardashian-bashing tweet, which is a response to Khloe's stripper tweet, Rose says that she'll be a "whore" to support her family, just like Khloe's "older sister" will be a whore to support hers. It's pretty obvious that she's speaking about Kim, who infamously made a (private) sex tape with Ray J, something that people often joke launched the reality star's career. Here are Rose's tweets:

She then posted this meme, featuring her ex West:

I don't think that either Rose or Khloe Kardashian are the victims in this scenario, and it's not just the fact that they insulted each other but how they chose to do it. Both women used sexualized insults to diss one another, and that's pretty freaking disappointing. Have we learned nothing at all from Mean Girls?

We live in a world that sexualizes women and then demeans them for actually being sexual. We have it hard enough out here and yet some women are still inclined to use that this kind of language to insult one another? Ugh, no thanks. This might be a petty feud between celebrities, but it's just another sad reminder that we are far from doing away with slut-shaming even amongst women.

Be better, people. That's just like, the rules of feminism.