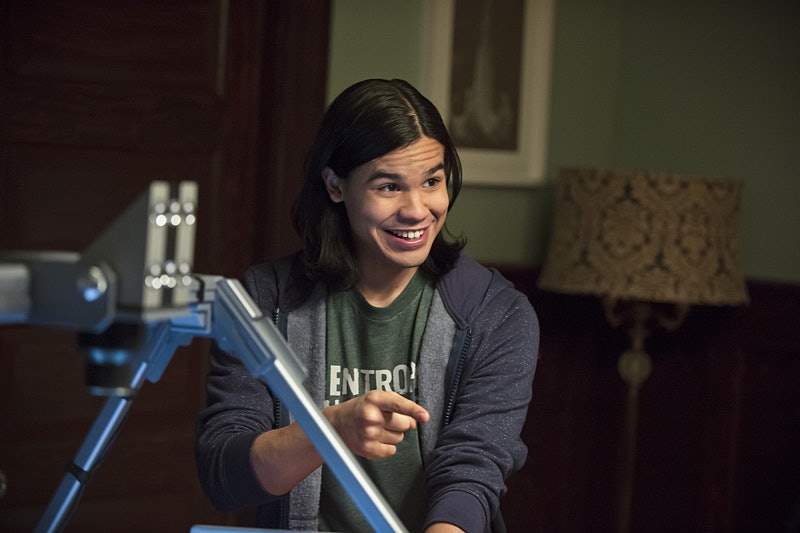 I knew I saw a red streak mixed in there with the yellow on the night that Nora Allen died. Last week on The Flash, Cisco confirmed that adult Barry Allen witnessed his mother's murder. But could The Flash have killed his own mother? That seems dark — even for The CW. At the very least, this reveal was a cool science lesson. When else in a crime scene would you need to know the age of a blood splatter sample?

We still don't know exactly what happened the night Nora Allen died. The flashbacks have only showed us the two blurs swarming her. She was screaming and the next thing you know, Barry's father is being handcuffed and dragged out of his own home. I am thankful that Barry was there and we can eventually "slow down" that night and get the details we so desperately need in a The Flash-back.

We need to get some answers about the logical enigma that is Harrison Wells soon. There's something about the way that guy smiles and makes a joke. I haven't been able to throw out the theory that Harrison Wells and Barry Allen are one and the same. That could explain why Wells' blood went unidentified.

Does that give us a motive? No. Does that explain why there were two speedsters? No, but we already know that it's possible for two Reverse-Flashes to be in the same place after one Man In Yellow dashed around both Harrison and Eddie.

Barry Has A Twin

I'm not getting soap opera-y on you for no reason. In DC Comics, Barry Allen and Malcolm Thawne are twin siblings. Thawne, of course, becomes Professor Zoom or the Reverse-Flash. Could Eddie Thawne be Barry's secret twin on The Flash, thus foreshadowing his villainous future? Could Eddie have killed Barry's (and his) mother instead? His blood would, therefore, match Barry's in the test.

The only thing that doesn't match up here, or with the Barry as Wells theory, is the visual presence of both a red and yellow streak at the scene of the crime. I'll leave that to Cisco Ramon to design/engineer for us later.

This is where time travel comes into play. What if Barry Allen went back in time to stop his mother's murder, but the very act of him going back in time and being on the scene is what caused the murder to happen in the first place? Granted, I can't think of many other reasons why Reverse-Flash would be zooming around Nora Allen. It's still a common time travel story that would make Barry's loss all the more tragic.

Barry Did Stop It & Had To Go Back

Let me take this one step further into darker territory. Imagine, if you will, that Barry uses time travel to create a world in which his mother is still alive, but something else goes horribly, horribly wrong. It's the classic butterfly effect, another common time travel tale. The space-time continuum is no joke. That would mean that Barry has to go back again and ensure that his mom is killed after all. How awful would that be?