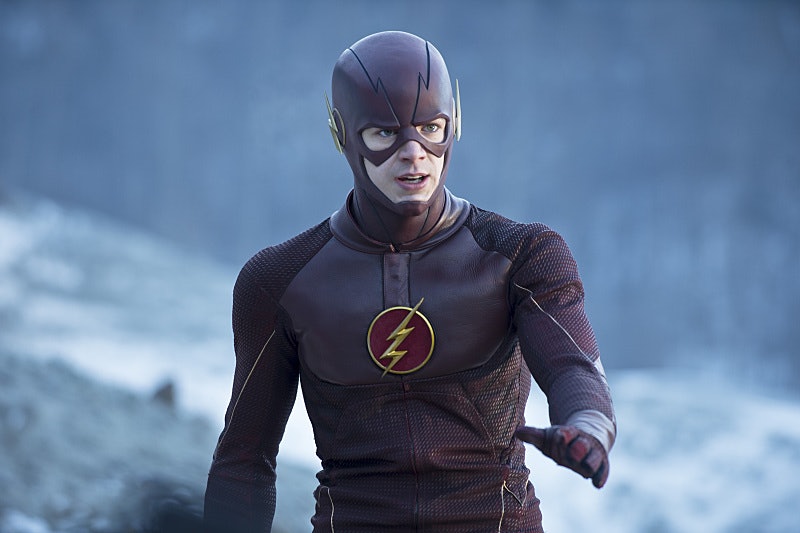 Are you guys ready for some time travel? Because it's coming our way fast — and that pun was totally intended. Tuesday's episode of The Flash finally had those two magical words uttered, "time travel." Looks like Barry was there the night his mom, Nora, died. Neither Joe, nor Cisco, can really wrap their heads around it, but Cisco's science never lies. Barry from the future was in the past.

Since day one its been clear that eventually time travel would play into the world of The Flash. Time travel is a huge part of the comics. The very early episodes of the show even hinted at the cosmic treadmill, even though it appears to be just a treadmill in S.T.A.R. Labs. Come on, we all know that if Barry just so happens to run fast enough on it, he's going to travel through time. We know Wells has that futuristic newspaper that is equal parts creepy and awesome. Time travel has been weaved into the show since the very beginning, and now it's actually going to be discussed on the show. Awesome.

Even though it appears to be a huge focus the next Flash episode, "Fallout," chances are we won't really get into the nitty-gritty aspects of what it means to travel through time. It looks like everyone actually highly doubts the idea of time travel, even though Cisco managed to prove that it was Barry's blood on the wall in his old house. Cisco then calls time travel "Twilight Zone-level stuff."

Roll your eyes at it now, Cisco, but you're the one who started this whole thing. By proving that it's adult Barry's blood on the wall, it completely opens up the flood gates for this discussion. How could adult Barry's blood get on the re-wallpapered wall if it weren't for time travel? Try explaining that then, huh? You can't, without tossing around the idea time travel. Better start accepting it, Cisco.

It is both exciting and fascinating to finally see how this great Flash mythology is going to start playing out on the show. While no one in Central City seems to excited, fans certainly are. Bring it on.