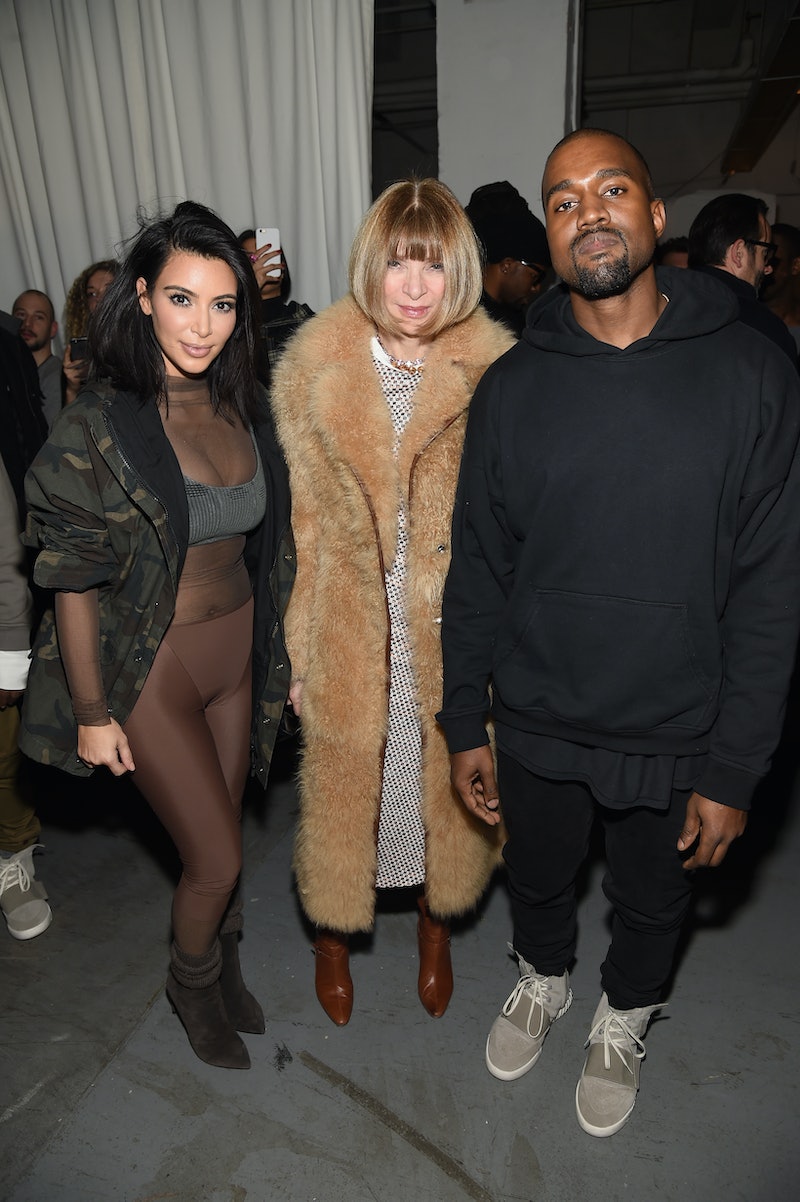 The 80s were alive and well as Kanye West debuted at NYFW, but not necessarily within his Kanye x Adidas Originals performance space. Two major attendees (I'll give you a quick guess as to the which of his acquaintances it could possibly be) were spotted dual-handedly leading the revival of spandex, push socks and grown out, gelled back hair. That's right, Kim Kardashian West and Justin Bieber went old school for the Yeezy Season 1 premier, channeling a young, fitness focused Jane Fonda and pop star of the decade Michael Jackson.

For the record, I highly dislike Kanye West — an admission that is usually met with either raucous applause of agreement or boos and insistent arguments of "he's the most influential artist of our generation," or worse yet, "He simply expresses himself through all available outlets." More often than not, there is a defensive lover and an agreeable hater in every group. Either way, Yeezy thinks enough of himself that he isn't losing any sleep over my feelings towards him and I can certainly put my pop culture opinions aside in the name of fashion. I am, after all, a professional if nothing else! Which is exactly why I will say that his show wasn't half bad. For the general population, a majority of the looks weren't wearable straight off the runway, but that isn't exactly the point of Fashion Week, so I definitely give him style points. I also wasn't crazy about the see-through bodysuit that resembled head to toe pantyhose, a look modeled by new sister Kylie Jenner in her runway debut. However, the outerwear put forth a modern take on urban street style that actually felt new, the sweatpant silhouettes were seemingly fresh, the Yeezy Boost sneaker already sold through its limited edition of 9000 pairs at $350 a pop and the show boasted the most diverse casting of models we are likely to see this season. All in all, I have to give it to him: Kanye West x Adidas Originals was outside the box in all the ways we hope fashion week presentations will be. Who would have thought that the crazy at the Kanye show would take place in his FROW and backstage where there was a serious 80s resurgence brewing.

Of course, the female half of Kimye was decked out in head to toe Yeezy, but somehow, I couldn't get past her resemblance to Jane Fonda long enough to decide if I remotely liked the updated urban styling off the runway.

Those high-waisted leotard like underwear. Those scrunch socks. Those tights with a slight iridescent sheen. Seriously, the only thing missing is a sweatband and a belt.

Now, I am not saying she doesn't look damn good. I mean, if I tried to pull this off I would look like a lanky, prepubescent teenage boy, while Kim K. looks like a pure Kardashian babe. Also, I need that camo jacket in my life. All I am saying is, somebody cue the REO Speewagon, because there is no denying Jane Fonda's fitness legacy lives on. Somewhere, she's smiling to the oldies because the resemblance is indisputable.

I know 'Ye debuted a new music collaboration with Sia, but were they also filming a "Beat It" revival backstage?

With that red leather jacket and his newly grown out, hastily slicked backed hair, you would have sworn Justin Bieber was a product of the 80s, even though he was actually born a decade later. At the very least, he's purposely paying homage to the king of pop.

As a child of the 80s and early 90s myself, I have never been hopeful that the popular trends of the time would return full force. However, there's no denying the resemblance on two of the most major attendees at Kanye's show. An interesting, what goes around comes around coincidence? I think so. Luckily, Jay and Bey showed up wearing "normal" FROW attire. Had they made their appearance in red leather and push socks, we may be forcing ourselves to sing a very different pop rock tune.