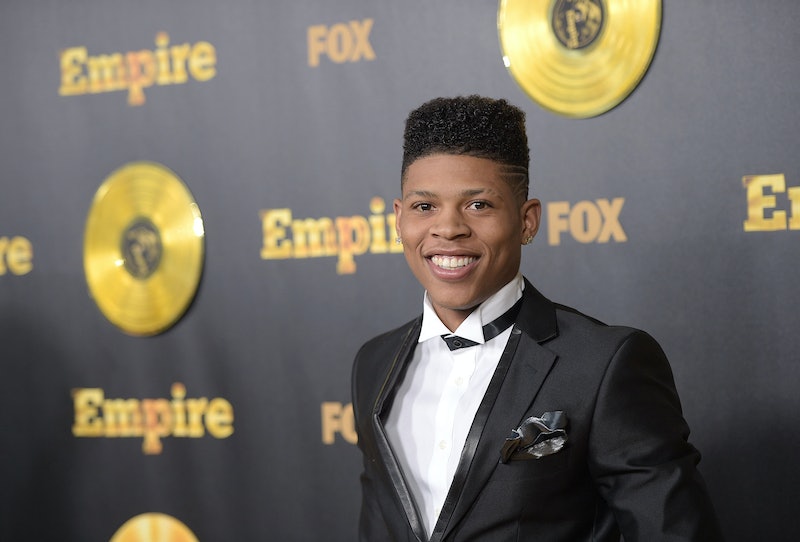 On Fox's Empire, the race is on for Lyon brothers Hakeem, an up-and-coming rapper, and Jamal, an R&B singer/songwriter. Not only are they trying to steal each other's first-single thunder, but the musical siblings are attempting to make hit albums that'll outshine the other's release. While we get to continue to follow that journey when the show airs Wednesday night, actor/rapper Bryshere Gray, who plays Hakeem on Empire , will be releasing his own EP with original songs soon. The 21-year-old raps under the name Yazz the Greatest and his debut album should be expected sometime in 2015.

"I plan on dropping some music in a couple of months in the middle of 2015. It’ll be available on iTunes," the Philadelphia native told AllHipHop recently. The buzz is building for the young rapper's album, since he's already had hit singles on iTunes as Hakeem. Even before Empire, Yazz was dropping tunes and music videos on YouTube and he's being mentored by another famous Philly face: Will Smith.

So what will it sound like? "The sound is very new, so many genres of music on there, you're going to be inspired," Gray told Philly.com. "You're going to make some babies off of it. Might go to the club with your friends off of it."

Here's what else you should know about this anticipated real-life release.

Before Gray even releases Yazz the Greatest's big debut, he'll need a record label — which is currently up in the air, last time I checked. Last month, he told XXL Magazine that a bunch of labels are interested, but he also doesn't want his release to overshadow the one put out by the Empire cast this year.

"Well, there’s a couple labels that are interested," Gray said. "There’s a bidding war going on, so I’m going let that war go and I’ll be at the end of the war with my flag in the air." Can't wait for the album itself? Get a preview by listening to Gray's single on Beatport, called "Respect." The tune was original released in 2013 by the label Raw Life. If Beatport isn't your thing, the track is also available for purchase on iTunes.