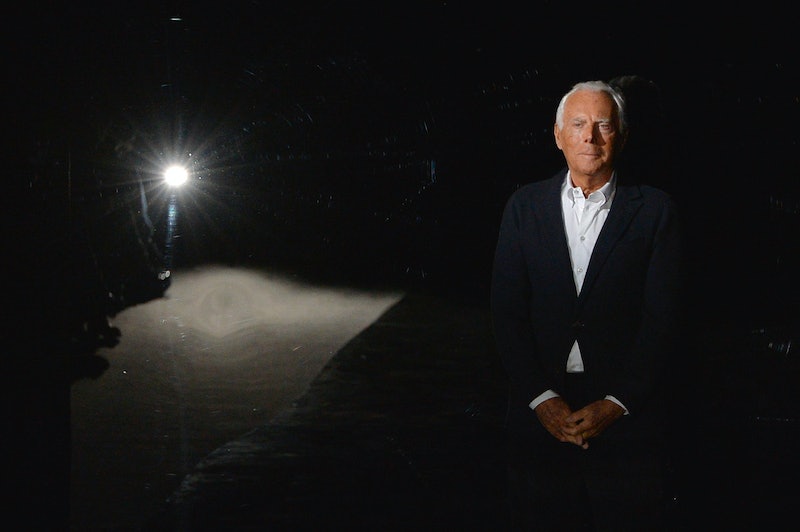 Giorgio Armani is celebrating an important brand anniversary this year, and doing so just as fashionably as you'd expect. Armani's 40th anniversary Le Sac 11 top handle bag is super exclusive. It's not even an "It" bag. It's more like an "Event" bag. Yeah, it feels that exclusive.

Here's the intel about the Le Sac 11. It will be available at two retailers during the Fashion Weeks in the two fashion capitals of Europe: at Antonia in Milan on March 1 and at L'Eclaireur in Paris on March 5. So unless you're headed abroad, the bags are not really within reach just yet.

The name has significance, too. "11" is the day of Armani's birth—he was born on July 11 and will turn 81 this year. It is also the number of the location of the company's Milan headquarters. So the layers of internal meaning are there.

According to WWD, the bag will come in limited editions for each store. There are three sizes—the usual small, medium, and large — and it's constructed of exotic leathers, like croc skin, tanned leather, and calfskin. There is a variety of colors and hardware, as well.

I haven't seen a picture or a price tag yet but that's of little consequence. I know it's going to be stunning. Judging from the materials with which it has been constructed, it isn't going to be anything close to affordable.

So why would this bag, as well as any "It" bag of any level or cost, be worth sacrificing the rent? Well, there are several reasons which may be ridic to anyone who doesn't "get" or care about fashion.

First, when a bag is super exclusive and limited edition, which means that it will increase in value as the years go by. Not many people will have it, leading to some degree of pricelessness.

Second, if you do splurge, consider it an investment piece, since the cost-per-wear, if you tote it around daily for years, will equal mere pennies. It could eventually be a vintage item, too.

Lastly, if you drop major loot on a bag, the rest of your outfit can be Old Navy or Urban Outfitters. You have will have the highest of highs to mix with your mass pieces and it's instantly enviable street style.

So whenever you're thinking of sacrificing the rent for an accessory, these are the things to consider. It will go a long, long, long way.