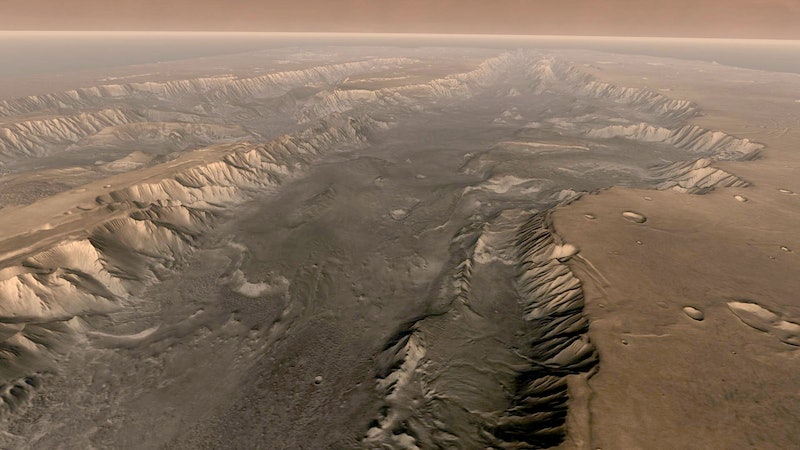 Astronaut Scott Kelly may be making the International Space Station his galactic bachelor's pad for the next year, but that's nothing compared to the adventure Mars One is offering up. The space exploration nonprofit currently has 24 one-way tickets to Mars and is narrowing down its application pool of the best possible civilian candidates to land on the mysterious red planet.

One way, you say? While even Scott Kelly has to come down to Earth sometimes, Mars One thinks round-trip journeys to previously uncharted planets are for boring astronauts. The Netherlands-based group is looking to establish a permanent human colony on Mars, with the first crew of four departing from Earth in 2024 (eventually, six crews of four will jet-set to the Red Planet).

When applications for the colony first went out in 2013, Mars One received more than 200,000 submissions. Now, the nonprofit has whittled that number down to just 100 eligible Martian candidates.

"The large cut in candidates is an important step towards finding out who has the right stuff to go to Mars," Mars One CEO Bas Lansdorp said in a statement. "These aspiring martians provide the world with a glimpse into who the modern day explorers will be."

Mars One selected their final 100 candidates from an applicant pool of nearly 660 candidates, the nonprofit said on its website this week. Now, just 50 men and 50 women remain. The final 100 applicants hail from every continent, with the most coming from the Americas and Europe. The age range, too, is quite large, with candidates as young as 19 years old.

So, what does it take to be part of the first human Mars settlement? According to Mars One, civilian astronauts need to show resiliency, curiosity, adaptability and creativity, and posses the ability to trust. "You trust in yourself and maintain trust in others," the company states. "Your reflection on previous experiences helps to inform the exchange of trust."

Civilian astronauts also need to be in good shape, obviously, and be proficient in English, which will be the official language of the Mars colony (not Martian, which admittedly was my first guess).

Mars One hopes to have its final four prospective Martians selected by the end of this year. Once chosen, the lucky four astronauts will begin training for that first mission nine years from now. However, it's still doubtful that humans will be able to survive on the Red Plant. According to a recent study done by researchers at the Massachusetts Institute of Technology, the first Mars One settlement will only be able to survive in the planet's atmosphere for 68 days.

But the very real threat of perishing on Mars isn't a turn off for most of the applicants. As London resident and Mars One finalist Alison Rigby told CNN this week:

It's something that has never been done before, it's a leap into the unknown. When people ask me why I am going to Mars to die, I say we are all going to die, but it's important what you do before you die.

More like this
6 Anti-Police Brutality Organizations You Can Support Right Now
By Syeda Khaula Saad and JR Thorpe
Watch Jacinda Arden’s Devastatingly Honest Resignation Speech
By Sam Ramsden
The 3 Best Heated Steering Wheel Covers
By Margeaux Baulch Klein
Marianna Hewitt’s Advice For Building A Personal Brand
By Taylor Jean Stephan
Get Even More From Bustle — Sign Up For The Newsletter
From hair trends to relationship advice, our daily newsletter has everything you need to sound like a person who’s on TikTok, even if you aren’t.