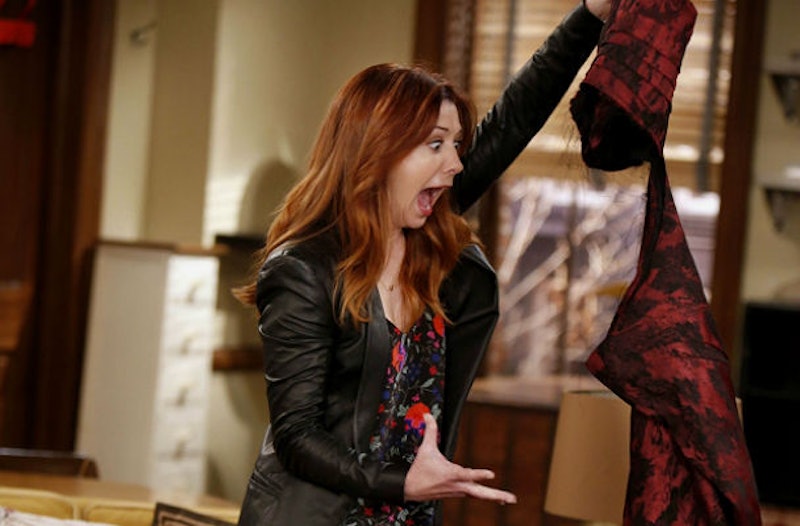 On How I Met Your Mother , we’re three episodes deep into the longest pre-wedding day ever, and this time we’re talking about the Bachelor and Bachelorette parties for Barney and Robin. Barney’s is all set, until a moment of distrust with Ted derails everything, but Robin’s is just sad — Robin-and-Lily-alone-in-a-bar sad. And why, pray tell, does Robin have a significant lack of ladies to send her off to marriage in style? Not because Lily messed up the invitations. Not because everyone happened to be busy. And not because Robin is too career-focused to spend time without people outside of her friends and family. Nope. It’s all because she actually admits to disliking women. LOL, right?

Yes, we always knew Robin was more inclined to hang out with her bros and watch hockey than she was to go for a ladies brunch, but does that mean she has to hate women – a species she just happens to be a part of? Does getting along with dudes mean she automatically has to loathe hanging out with women other than Lily? It’s an age-old “cool girl” stereotype: a girl who refuses to get along with other women because she only gets along with men. The problem is, we thought Robin was actually a cool girl, and a real cool girl doesn’t need to claim all other women are “weepy” and “annoying” in order to make herself feel like a full human. Yet, suddenly, here she is days before her wedding throwing out the rom-com definition of a girly-girl as a deplorable thing while Lily reenacts the definition for our comedic delight. Only I’m not laughing.

There is such a thing as a woman who is mostly friends with men. There is also such a thing as a Bachelorette party that includes men and women – this is 2013, after all. But instead of exploring that option – which believe me, could yield hilarious results of its own – we’re left with the He-Man Woman-Haters Club, led by one Robin Scherbatsky. Lily does her best to force Robin into making friends with other women staying at the Farhampton Inn, but Robin immediately fails because she’s extremely catty – the very thing she supposedly hates other women for.

As Lily watches in horror, Robin waltzes up to a few ladies, trying to bond with the first by calling another woman in the bar a “slut” (degrading and offensive to women off the bat, eh?) and second by giving up completely and simply making fun of another woman’s bangs. Her excuse for this behavior is that she was raised “as a boy,” but the only way a boy would grow up to behave like this is if he became a 10-year-old playground bully and never grew out of it. Even then, I doubt any young boy would make fun of a woman or girl because she had bangs. In fact, everything Robin does in the bar to try to bond with women is a stereotypical picture of female cattiness – an image that needs to stop being promoted to garner cheap laughs on a sitcom. It promotes bland, unforgiving female characterization in a world that’s finally showing some progress in the creation and representation of fully formed women characters.

This high school cafeteria-grade reaction to the women in the Farhampton bar isn’t just problematic in an overall womenkind-on-television sort of way. It’s bad for Robin, a character we’ve come to love, too. Either Robin thinks that’s the only way to communicate with other women, which is hugely problematic, or Robin is not actually a Lost Boy, but a terrible woman in Lost Boy clothing. Whichever is the case, it’s still a rude awakening for a character we’ve fallen in love with over eight seasons. Preferring a Saturday morning sports session with cornflakes and beer is lovable and true for some women, because believe it or not, we don’t all feel the need to put on a fancy dress and sip tea and mimosas for Saturday brunch. We are a diverse people with a wide range of preferences, which is apparently something we need to teach the HIMYM writers.

However, hating other women because they’ve got bangs, sometimes they cry, and you understand nothing else about them is just plain awful, especially because Robin is not exactly a chest-beating, manly ape. She’s a woman, through and through – even by her own narrow definition. We’ve seen Robin cry and we’ve seen her be girly over eight seasons. In fact, before she broke up with Ted because she didn’t want to commit to anyone before she figured her career out, she wasn’t all that “manly.” Her “dude” traits came out after she defied the stereotypical TV woman and wanted to focus on her career instead of her boyfriend. And now that she’s found her surprisingly appropriate match in Barney and we’re supposed to be over the moon, the writers are taking Robin’s sportier proclivities and turning them into a nasty, deep-rooted hatred of all women other that Lily.

It’s not cute and it’s not cool. The idea that there are women who stand outside of mainstream womankind and are therefore superior or more interesting is, for lack of a better word, bullshit. It suggests that a woman who loves getting mani-pedis is somehow lesser than, or hell, separate from a woman who watches Monday Night Football. It separates us into boxes: lame girly girls and women who act like men. Neither side promises to produce complete humans, because even the “cool” women who do stuff like men are deriving their quirks from men and not from their own interests and desires.

It’s fun to make fun of Robin on this show. That’s her character’s cross to bear. But moving forward, would it hurt to avoid making her a downright awful example of womankind? It’s certainly not a good mark to leave on the final season of an otherwise pretty fantastic sitcom.

More like this
Sandra Bullock, Girlboss Extraordinaire
By Matt Harkins & Viviana Olen
Spice Girls’ Net Worth: The Richest Member Is Wealthier Than The Rest Combined
By Hugh McIntyre
'Who Killed Sara?' Won’t Return For Season 4
By Brad Witter
Everything To Know About A Million Little Things' Reported Final Season
By Brad Witter
Get Even More From Bustle — Sign Up For The Newsletter