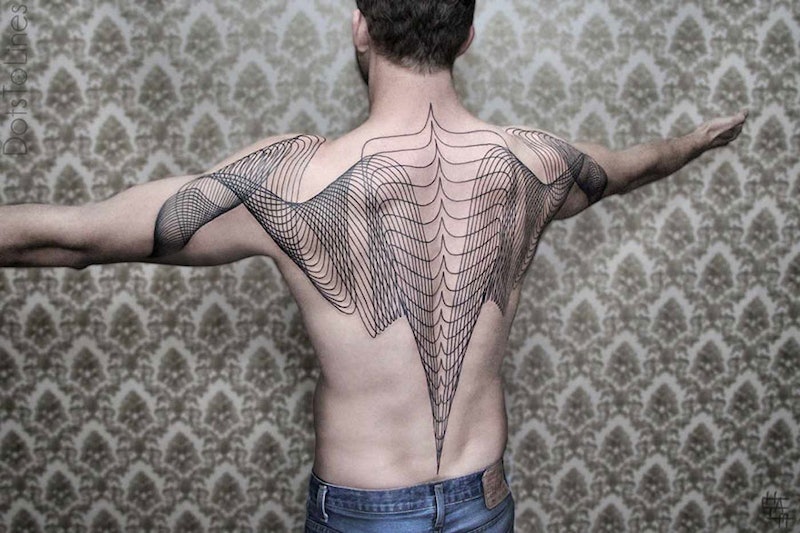 It will surprise absolutely no one when I say that body art has come a long way from the anchors, pin-ups, and “Mom” tats that sailors used to wear. These designs by Berlin-based tattoo artist Chaim Machlev are further proof that tattoos can be elegant and sophisticated. In his art, Machlev manages to find a beautiful balance between the geometric and the organic; bold, crisp lines trace up the body, influenced, it seems, by sound waves, contour maps, and mathematical patterns. Also, sooooo pretttttyyyyyyy.

Machlev has an unusual background for a tattoo artist. He has been tattooing for less than three years, since the spring of 2012, when his moved from his home country of Israel to Berlin. Prior to becoming involved in the tattoo industry, he served as a project manager at an IT company in Tel Aviv. In an interview for Idea Tattoo, Machlev admits that he had little interest in tattoos until he considered getting one himself, and describes his first tattoo experience as “one of the strongest impacts of my life, as I found the procedure super spiritual and life changing.” That first tattoo put him on the road to becoming an artist; he says:

I started to see it in my dreams, every person that I saw I thought about lines that go through their body and how interesting it could be to actually be a tattooist that decides which lines flow better for an individual body, and dedicate your life to the experience of changing people’s body as a routine.

Upon arriving in Berlin in 2012, Machlev struggled to find a studio that would allow him to practice tattooing, but eventually succeeded and has since become one of the trendiest tattoo artists of the moment, working out of a private studio where he tattoos one person a day. Although Machlev’s designs are distinctive for their geometric minimalism, he hesitates to label his style, saying:

It is hard for me to categorise my tattoo style as a certain style. […] I could say that I have that split into my designs, just like in my personality, I make those art minimalistic lines – the computer kid inside me, and very detailed mandalas – the spiritual man inside me.

Check out more of Machlev’s gorgeous work on his website.