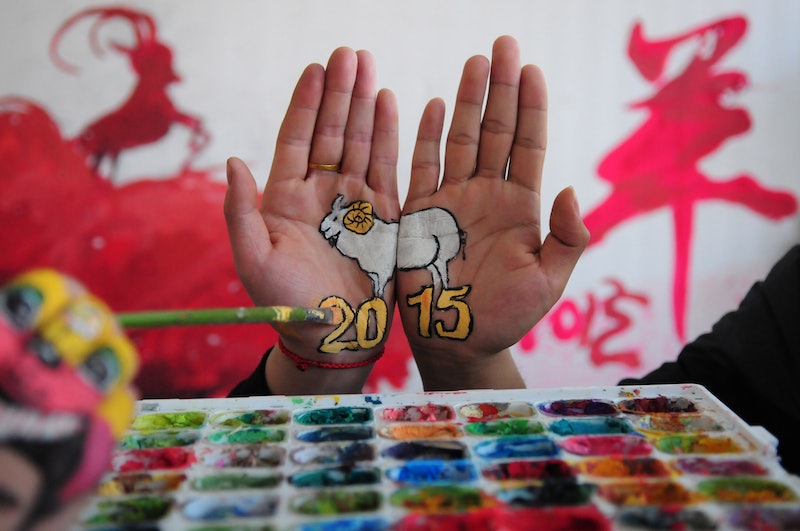 Gong Hey Fat Choy! (That means Happy New Year in Cantonese.) Thursday, February 19 is Chinese New Year, and 2015 is the year of the sheep (or goat, to the Han Chinese). According to the Chinese lunar calendar, it won’t be the sheep’s year again until 2027. Although the Chinese use the Gregorian calendar, like much of the rest of the world, their traditional Chinese calendar is used to note festivals, lucky days, best days for marriage proposals, weddings, pregnancy, traveling, important decisions, and of course, horoscopes. The Chinese have assigned each year a specific animal, and each of their New Year's is devoted to the celebration of that animal.

As with any zodiac sign, each person born in a specific year is said to have some particular traits that set them apart from the year before them and the year after them. The Chinese Zodiac, or Sheng Xiao, is based on a 12-year cycle and each year has an animal assigned to it.

Because keeping track of your astrological sign wasn't enough, in honor of Chinese New Year, here's what your Chinese zodiac sign says about you, too.

If You Were Born In The Year Of The Rat…

You are: Smart and wealthy! Well, at least usually, because you have the drive to succeed and people like you. You are clever, materialistic, but also sensible. Despite being driven to succeed, you’re not so great when it comes to concentration, and you’re not exactly a good leader. You also tend to be selfish.

If You Were Born In The Year Of The Ox…

You are: Gigantic! Not in size, per se, but in your presence. You are honest, have a knack for leading, loving, and put family and your career on a pedestal. Although you make for a great leader, your communication skills need some work and you could focus on being less prudish. But at least you’re persistent and are likely to be happy in your latter years.

If You Were Born In The Year Of The Tiger…

You are: Kind of a jerk! (Sorry not sorry.) Tigers tend to be cruel, straightforward, and honest to a fault — like, until it hurts. But you are respected for that honesty and are generally loyal. You’re also a show off, which no one really likes, and your short temper makes you someone with whom no one should trifle. Sometimes you execute something before giving it the thought you should.

If You Were Born In The Year Of The Rabbit…

You are: A love bunny! Seriously. You are gentile, compassionate, and loving. You’re funny, open, romantic, and always looking to enjoy life. You prefer to avoid confrontation, so sometimes, that can affect your job. You are reserved, and your greatest weakness is the fact that you’d rather escape reality instead of dealing with it.

If You Were Born In The Year Of The Dragon…

You are: To be worshipped! In the Chinese culture, you have one hell of a high reputation. You are an intellectual, full of energy, strive for perfection, and do not fear challenges. You are romantic and sensitive, but can sometimes come off a little arrogant. You can be moody and delusioned, and no one would ever associate the word “tact” with you.

If You Were Born In The Year Of The Snake…

You are: Mysterious! You’re secure in your finances, sympathetic, passionate, and have a great understanding of yourself. While you’re perceptive and aim to accomplish your goals, you’re also sometimes catty, jealous, and suspicious. You are headstrong, and have been known to lose a friend or two because of your wicked ways.

If You Were Born In The Year Of The Horse…

You are: Dynamic! You are naturally nice, kind, and generous. You have lots of friends and are independent, but are a bit out of control when it comes to spending. You drop money on social activities and fancy clothing, and persistence isn’t your thing, so success really isn’t in your future, apparently.

If You Were Born In The Year Of The Sheep…

You are: Clever and kind! You’re sensitive and prefer to keep things low key and quiet. You’re known for being wise and compassionate, and people know they can count on you. But despite the fact that you want to take care of people, you can often be pessimistic and vain.

If You Were Born In The Year Of The Monkey…

You are: An erratic genius! You’re quick, lively, and up for anything. You have a great memory, are social, love sports, and are more self-assured than the rest of the signs. But you can also be manipulative, selfish, and people tend to think you’re a bit arrogant. If you’d stop being so mouthy then you’d probably achieve more.

If You Were Born In The Year Of The Rooster…

You are: Hot! You’re faithful, usually on time, a deep thinker, and communication is your strong suit. You have a sense of self-respect that others don’t usually have, and you’re delicious. (Seriously. You are super attractive.) But with all these good looks come your eccentricity and your inability to relate to those around you. You’re sort of an emotional basket-case, narrow-minded, and all those good looks have made you a bit vain.

If You Were Born In The Year Of The Dog...

You are: Obedient! Like the dog you love to cuddle at night, you know how to obey your master, and are courageous, faithful, and smart. You know how to keep secrets safe and you love honestly. Sometimes, however, you lack stability and can be cold when it comes to your emotions. You’re also prone to anxiety that doesn’t really have a direct cause, though you like to flaunt your courage.

If You Were Born In The Year Of The Pig...

You are: Chivalrous! You believe in being gallant, and have a strong heart that keeps you appearing calm. You have a high tolerance for people, are loyal to your friends, and only lie when pushed. On the flip side, you’re also sort of lazy, a bit naïve, and can’t seem to communicate clearly.