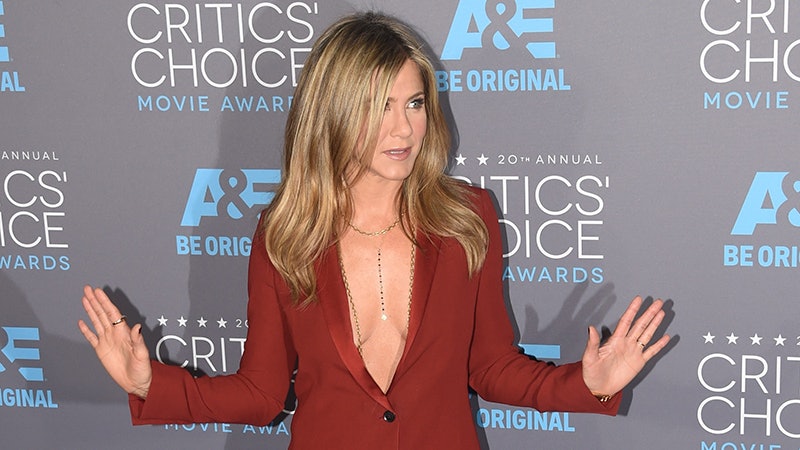 Since Friends hit Netflix on the first of the year, it's been easy to find debates about who the funniest Friend is, who the smartest Friend is, who the most fashionable Friend... and so on. I don't mean to add to that discussion, exactly, but guys, I have to say it: There were multiple times when Jennifer Aniston's IRL style was shadowed by her character, Rachel Green. Don't get me wrong, I would give just about anything to shop in Aniston's closet. But Aniston doesn't have anything on Ms. Green.

It's no mystery why Green's outfits were so on fleek: In the first episode, we learn that Rachel left a dentist at the alter and, as a result, was quickly cut on from daddy's trust fund — but apparently got to keep all those clothes she'd gathered in the meantime. Then, when she was forced to find a big-girl job, Rachel went from working at the beloved Central Perk to Fortunata Fashions, Bloomingdale's, and Ralph Lauren — all jobs that come with serious wardrobe perks, even if they don't mean piles of money.

Aniston, on the other hand, is famous for wearing black and her minimalist fashion choices (both reasons I absolutely love her, TBH), but she's had her fair share of style missteps. Here, 15 times Rachel Green's outfits out-shined her real life counterpart.

Aniston is known for her all black wardrobe proclivities, but Rachel was hardly seen without at least a pop of color. And even though Aniston should be a pro at this point, I prefer the way Green wore a classic black shirt over Aniston's look here. The statement necklace dresses it up a bit more, and the overall beauty look is soft.

Green was constantly casual on Friends. Well, except for the times she had a job interview or was trying to impress Mark. Red carpet royalty Aniston didn't quite have her off-duty look nailed down down yet in the early 2000s. I love the army green oversized scarf, those metal frames are a little rough.

As queen of the LBD on the red (or blue?) carpet, I much prefer Rachel's kimono dress to any casual dress Aniston has worn for award season. Sure, some of Aniston's dresses have been uh-maze-ing, but Rachel's has far more personality.

I know, I know, Aniston isn't quite wearing lingerie on the right, but let me explain. When Rachel accidentally met a boy's parents in her lingerie look, she played it off flawlessly. I just don't quite get the metal thing in Aniston's cleavage.

Nothing beats a pink, furry coat. Ever.

Aniston looks amazing in her two-piece dress on the right. I love the mix of patterns with sequins. But only Rachel could pull off a mini skirt and knee high boots in such a classy fashion.

After I watched "The One" where Rachel babysits Marcel, I could not get over her outfit. I prefer the mini and knee highs to Aniston's shift and coat ensemble.

Aniston pulled off wearing a T-shirt on the red carpet pretty well when she stepped out in an old band T-shirt to the premiere of Oceans 11. Still, there's nothing better than wearing an oversized sweatshirt all of the day.

After Ross called Emily "Rachel" on the alter, Rachel kind of rebelled against everyone by rocking a red hair wrap. And as soon as I watched that episode it made even me miss my old hair wrap (which, unfortunately, had to be cut from my hair leaving me with a strand of blonde hair sticking straight out for about a month.) It's a trend that definitely beats the fishtail braid of today.

Rachel Green singlehandedly made mom jeans cool in the '90s (I think).

While Aniston is known for black, Rachel might as well be known for wearing turtlenecks. She practically lived in them.

Aniston's dress is super pretty, but the way Rachel mixes prints is divine.

I love the elegance of pairing a tuxedo jacket or a blazer over a casual outfit to dress it up a little more. Rachel did just that over a pair of overall shorts. Who else could make that work?

We don't know what Aniston's wedding dress is going to look like yet, but I just want to warn her that she has some fierce competition with that veil and lace appliqué.

More like this
Most Comfortable Underwear For Big Butts
By Audrey Williams
Jennifer Aniston Just Gave Courteney Cox The Biggest Endorsement
By Darshita Goyal
Social Media’s Favorite Fashion Influencer is Meredith Blake from ‘The Parent Trap’
By Morgan Sullivan
Are Skater Shoes the Next Y2K Trend to be Revived by Gen Z?
By Lauren Alexis Fisher
Get Even More From Bustle — Sign Up For The Newsletter