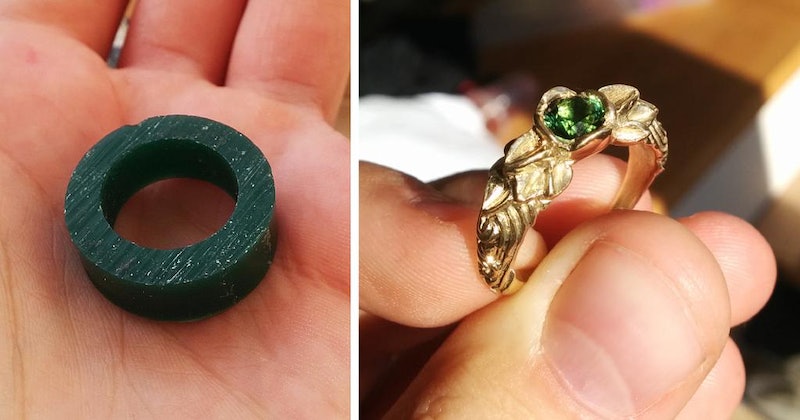 Elaborate proposals have their own spot of glory and admiration on the Internet. Remember that dude who took four years to piece together the ultimate, celebrity-filled proposal video? Or the couple who met at a Seattle Starbucks and later got engaged at the same spot? Thanks to omnipresent smart phones, every moment of our lives, from very dope breakfast sandwiches on a rainy Monday to life-changing moments like marriage proposals, we now have an almost constant ability to document our existence—and to compare our lives to those of other people. With all the comparing going on, and all the internet celebration of the Super Romantic Proposal, can you fathom what kind of pressure that adds to the huge decision to ask someone to hang out with you for the rest of your life? Welp. Looks like this guy just one-upped everyone by creating a completely unique ring for his future wife, developed in a most time-consuming, impressive way. And, as a bonus to all the sweetness and hard work, it's actually incredibly pretty too.

This Hero Of Love began the process by taking a ring of wax and perfectly sculpting it into a one-of-a-kind design. He says he and his lady love really dig nature, so that set the floral theme. A magnifying glass and a satchel of fine tools helped guide the carving process. Once he got each leaf carefully rounded out in the wax, he took the wax to a jeweler to cast it in gold. A jaw-dropping green tourmaline gemstone sits in the center, finishing it off. I mean...

Boom, y'all. Ain't that some magical forest jazz? Who could resist that? And of course, she said yes! Now the two are totally engaged and have a genuinely cool story behind it. Congrats, guys!