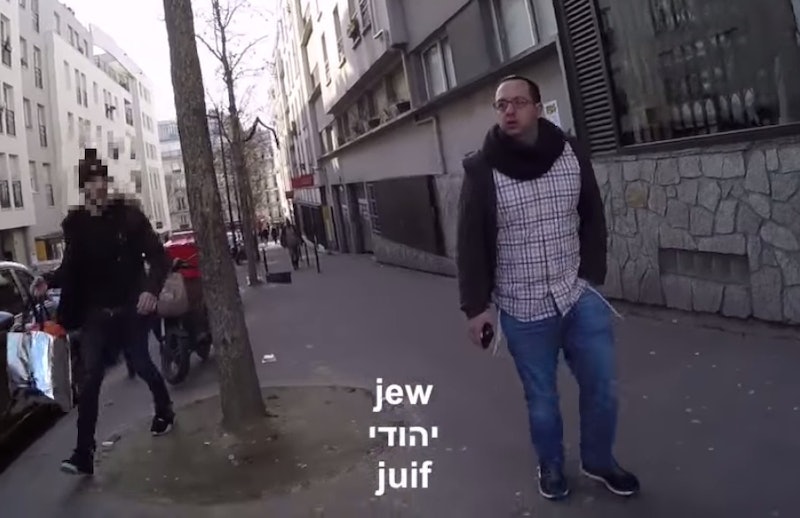 There's been a lot of discussion of late on the state of the Jewish community in France, and the everyday challenges and risks they face. This has been especially true after the high-profile kosher deli shooting that claimed four lives, a grisly crime committed in the immediate aftermath of the Charlie Hebdo shooting back in January. Amid reports of increasing anti-Semitism across some European countries, it's reasonable to wonder what exactly French Jews are facing right now, and one Orthodox journalist has an answer: a Jewish man, Zvika Klein, wandered Paris for 10 hours and filmed it, so we get to see what happened.

It's a move evocative of the New York City catcalling video that made the rounds not too long ago, albeit with a very different theme: rather than harassing a woman for her looks, Israeli journalist Zvika Klein is singled out for his faith, displayed openly by his wearing of a traditional Jewish yarmulke. The reactions range from casual barbs — a man simply blurting out "Jew" as he passes, for example — to more overt shows of disrespect, being called an anti-gay slur and spat upon.

It's a video that could fuel the notion that's been put on full-boil by Israeli Prime Minister Benjamin Netanyahu in recent weeks — that European Jews should abandon their real, lived homelands in favor of emigrating to Israel.

All in all, it's pretty terrible, and at the very least it lends credence to the idea that an open display of the Jewish faith isn't welcome in some parts of France's metropolitan capital. Some of the tension seems like naked and simple bigotry, while some of it is political — the woman who yells "Viva Palestine," for example, a presumptive and racist remark as it wholly assumes Klein's worldview.

But of course, we shouldn't feel too high and mighty sitting here in America, as racist abuse and vitriol isn't some monopoly by the Europeans. We've got our own fair share of bigotry and hatred over here, as is the case in countless countries and societies around the world. In some place, the beleaguered minority populations change — Klein surely wouldn't have suffered such verbal abuse if he were walking through the streets of Tel Aviv, for example — but it's hard to escape the specter of prejudice.

The state of Israel itself has suffered from some of these same issues. Obviously, tensions between the Israeli and Palestinian populations run red-hot, given decades of armed conflict. Perhaps the more relevant parallel to the situation in France is Israel's problems with the treatment of African immigrants, who've suffered a glut of racist epithets, riots, assaults and dehumanizing rhetoric in recent years.

All in all, the world is kind of depressing, isn't it? It'll be a relief if we ever get to live in a world free from racism and suspicion, but clearly we've still got light years further to go.