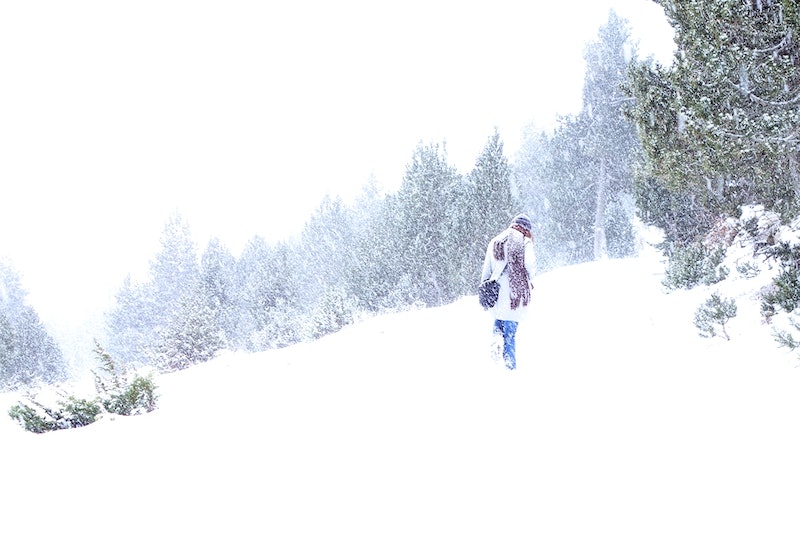 Welcome to the seventh circle of Hell, everyone. Or as most of America knows it: winter. Seriously, when will winter end? By the looks of it, probably never. This is the only season where SAD is a concern, when normal humans are expected to navigate practically-invisible black ice on their way to work, and when something as beautiful as fresh snow quickly turns into brown and yellow urine sludge. It's a disgusting time of year, and it's currently showing no signs of letting up. This is especially the case for the poor folks in New England, who haven't gotten a significant break from the cold weather since October.

Snow days have become a thing for adults. It's that bad. Flights have been cancelled, commuter trains have been shut down, and we're all starting to live like bears — hibernating in our caves until the early darkness comes to an end. I mean, how long have we been stuck in this icy prison? Four or five months? The days are starting to blend together in a chilly weather forecast haze of misery. If you've been dusting off your spring wardrobe essentials, you might want to take a step back. Because winter is probably never going to end, and here's why.

1. Because it's only February

Snow has fallen as early as September and as late as May, so there might be at least three more months of this madness to look forward to. Sorry, guys.

2. Because there's no end in sight

The snow just keeps coming down in buckets. It's getting to the point where even if the sun does come out, it would take an extended period of extreme heat to melt all of it. So you'll probably see dirty snow piles well into the summer.

3. Because the sun has completely checked out

Speaking of the sun, WTF? Where have you been, dude? Just relaxing with a Coolatta on a beach somewhere? Get back to work, fool. Otherwise, the entire population on the East Coast will soon be buried alive.

4. Because the Groundhog is always right

OF COURSE he saw his shadow. I'm pretty sure the only way a creature lacks a shadow is if they're a ghost. So thanks a lot, Phil. New Hampshire is completely right in demanding his arrest.

5. Because look at this f***ing forecast

I mean, this is only a five-day forecast for Boston. And three of the five include snow. Fantastic.

6. Because there were too many flights leaving on time

Flight schedules were just starting to recover from holiday madness when the consecutive snow storms first began. It's like people in 2015 aren't meant to fly on the date and time of their choosing.

7. Because Mother Nature hates us

What did we ever do to you, M.N.? Don't you put us through enough with the humidity and mosquitos during summer? Why this?

8. Because every winter gets worse

We're only inching closer and closer to the snowy apocalypse featured in The Day After Tomorrow, so just start prepping those bunkers now.

9. Because California thinks it's hilarious

The West Coast is just laughing it up, with their "Marine Layer" a.k.a morning fog, and their occasional rainfall. What kind of sorcery are they practicing over there? I'm inclined to blame Kanye.