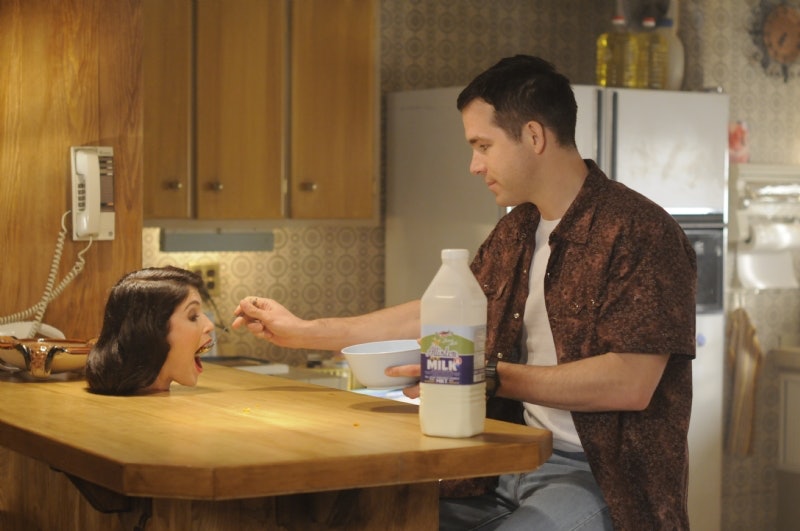 When considering a film, some actors might steer clear of a character that dies in the first few pages of a script. But not Gemma Arterton. When she read the script for the Marjane Satrapi directed flick, The Voices , she was eager to play Fiona, a woman who is decapitated in movie's first moments. "I was really looking for something different," the actor says of the film's unconventional plot.

The film, which premiered at Sundance 2014, and stars Hollywood mainstay Ryan Reynolds, is about as weird as they come. We follow Jerry, a seemingly normal, likable factory worker who is hiding one fatal secret: His pets, and all the animals he encounters — the goldfish at the Asian restaurant, the deer he hits with his car, and the dog and cat he lives with — talk to him, and tell him to commit sinister crimes. One such crime being the murder of Fiona, the cute British girl at work he wants to date. And it isn't a spoiler to say that Arterton's character exists as a talking, severed head for the remainder of the film. "When I met Marjane, she said, 'Who do you want to play? Do you want to play the head in the fridge or Anna Kendrick's role?' And I said, 'No! I want to play the one that's always in the fridge!'"

If it sounds cringe-worthy, it's because it is. But the film utilizes a unique comedic perspective — like Ryan Reynolds voicing Mr. Whiskers, Bunny Monkey, and most of the animals that talk to him — to broach the topic of mental illness. "We like him, even when he's done these terrible things," Arterton says of Reynolds' character. "It's controversial, but it's an exploration of mental illness. That's what the point of the film is, and it's quite beautiful. But it's difficult to talk about it if people haven't seen the film. People who read this interview may not understand, it's a delicate subject."

The film's subject matter is one of the reasons the script landed on The Blacklist, a roster of scripts that are clearly superior, but are having trouble being actualized for a variety of reasons. "It's a cross between a Hitchcock film and a Coen brothers movie," Arterton says. "Its hard to define what it is."

But Before Fiona is a head on a plate in Jerry's fridge, she has a rather terrifying death sequence. "It was really horrible!" Arterton laughs. "We shot the whole film in Berlin in March, which is freezing. We shot that scene at nighttime and it took the whole evening. It was cold, and for some reason we always shoot these scenes wearing hardly anything, like just our underwear."

Underwear, and a whole lot of fake blood. "I had this rig on me to squirt blood out, and it actually takes a lot of practice. It's like a dance," she says. "You've got the person who pumps blood, the person who releases the contraption, then you've got to time it with them. I'm always impressed with the workmanship of these gory scenes. It's great fun!"

And even though his character murders her in the film, Arterton and Reynolds' chemistry — that is, his chemistry with her severed, well-preserved head — is palpable. "We have natural chemistry," she says. "Ryan is the loveliest actor I've ever worked with. He's so down to earth, so funny, he's got no ego. He's genuinely lovely. Before we started shooting we'd all go out as a cast for dinner and we got to know each other, and that's when you start to build that chemistry."

While it's safe to say there won't be a sequel, Arterton would jump at the chance to collaborate with Reynolds again. "There's one bit where I'm the head on the table, and he starts to feed me cheerios or something, and there's a bit where I go to bite his hand, that was all improvised. I'd love to work with him again. He's just a terrific actor and I think that really shows in this film."

The Hansel & Gretel: Witch Hunters actress is no stranger to strange roles, and to her, to kookier the better. "It was something I couldn't wait to do. I'm very physical as an actor and I really loved the challenge of being completely still," she says of playing a bodiless cranium. "It's boring always playing the same thing. I had the opportunity to play a talking head, who can say they've done that?"

The Voices, starring Gemma Arterton, Ryan Reynolds, and Anna Kendrick, is in theatres and available on OnDemand now. Watch the trailer below: